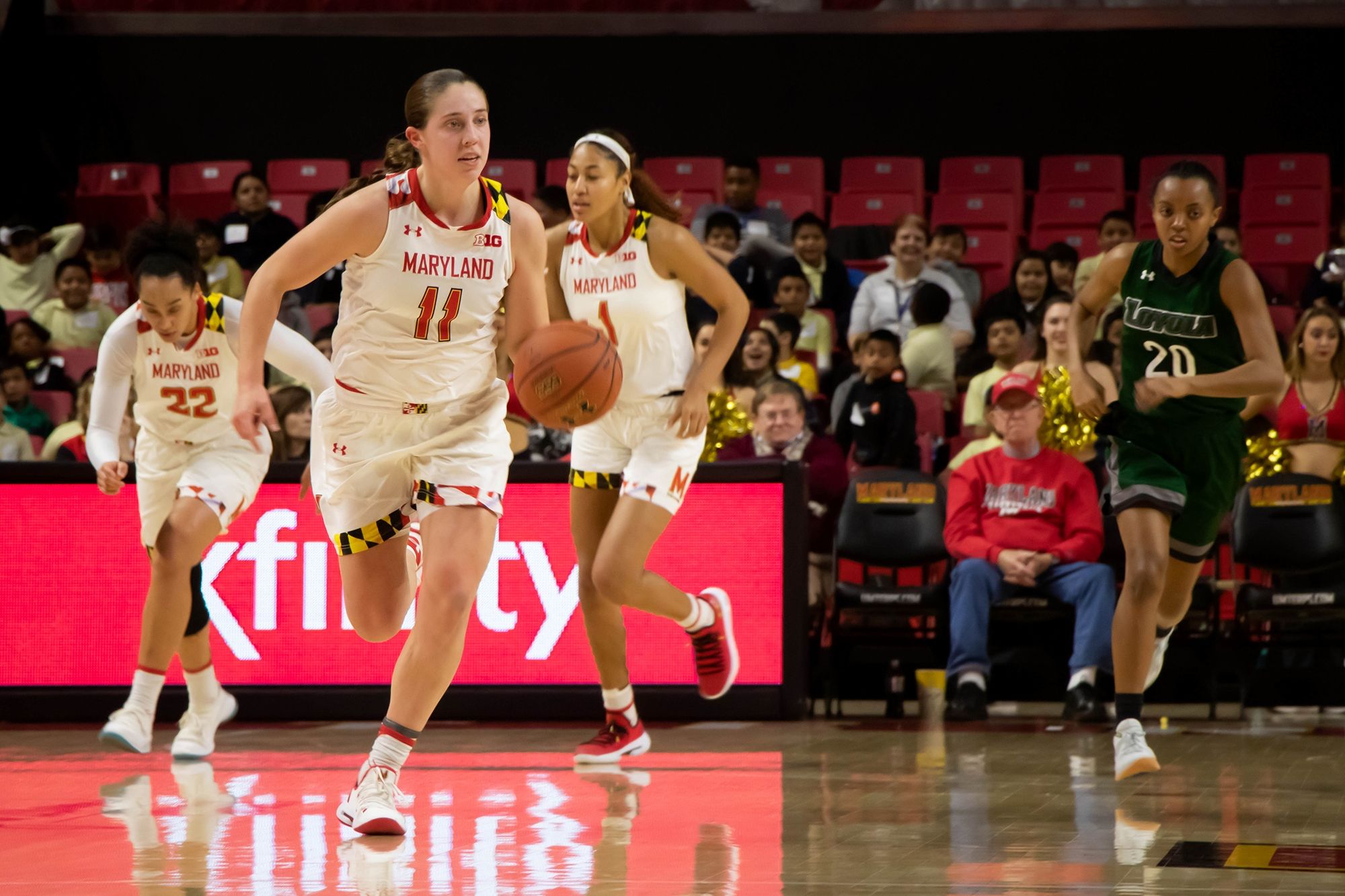 As the second verse of Drake’s “God’s Plan” blared over the speakers before Monday’s Maryland women’s basketball game, the crowd full of more than 6,000 children reached its first ear-splitting screech.

In response, the Terps’ pregame shootaround screeched to a halt; players keeled over, laughing at the crowd’s high-pitched rendition of Drake’s popular song.

It was “Field Trip Day” at Xfinity Center, and what generally would have been an innocuous environment against an overmatched nonconference foe became a raucous one.

And after an early-game setback — perhaps due to the unique crowd experience and unusually early 11 a.m. tip-off — the Terps regained their footing and eventually dominated the Greyhounds, 83-48.

“This is one of our favorite games of the year,” coach Brenda Frese said. “It’s just awesome to be able to introduce these kids to our sport, to our team, and to get them on a college campus and show them what Maryland is all about.”

However, it didn’t seem like one of the Terps’ favorite games at the onset.

Loyola and Maryland traded back-and-forth misses before guard Bri Betz-White put the Greyhounds on the board first — drawing cheers from kids pleased to finally witness a score — and the Terps struggled to get out in transition.

With less than two minutes left in the opening frame, Maryland was 3-for-7 from the field and led the winless Greyhounds just 9-8. The crowd, desperate to cheer for the home side, sat idly by as the Terps continued to play at an uncharacteristically slow pace.

[Read more: Brianna Fraser broke out of her senior slump with a double-double against James Madison]

And while the early-morning tip-off seemed to impact the Terps’ focus early on, Maryland’s practice schedule this season may have laid the groundwork for a quick turnaround.

“This semester we started practicing earlier,” forward Stephanie Jones said. “I think with that we came out more prepared. We were able to come out with more energy than we probably would’ve if we practiced later.”

Right on cue, the Terps ended the first quarter on a 10-0 run, and the opening-period burst snowballed into a 21-3 spree. Maryland never turned back after the blitz put the Terps ahead 30-11, and the several thousand children in attendance seemingly got louder with every stop and score the other way.

Guard Taylor Mikesell notched her most efficient offensive output of the season, as the freshman scored 19 points on 5-of-7 shooting from behind the arc. In her first “Field Trip Day,” Mikesell savored the experience.

“It definitely exceeded my expectations,” Mikesell said. “I’ve never really heard that many screaming kids at 11 in the morning.”

And with the Big Ten slate less than two weeks away, the game offered a fun reprieve before the vigors of conference play. But for Mikesell and the rest of the team, the distinct atmosphere was more than just an enjoyable promotion on the calendar.

“We want to leave a good impact on them with their first experience coming out here,” Mikesell said. “I think it was really cool and I’m excited for next year’s too.”