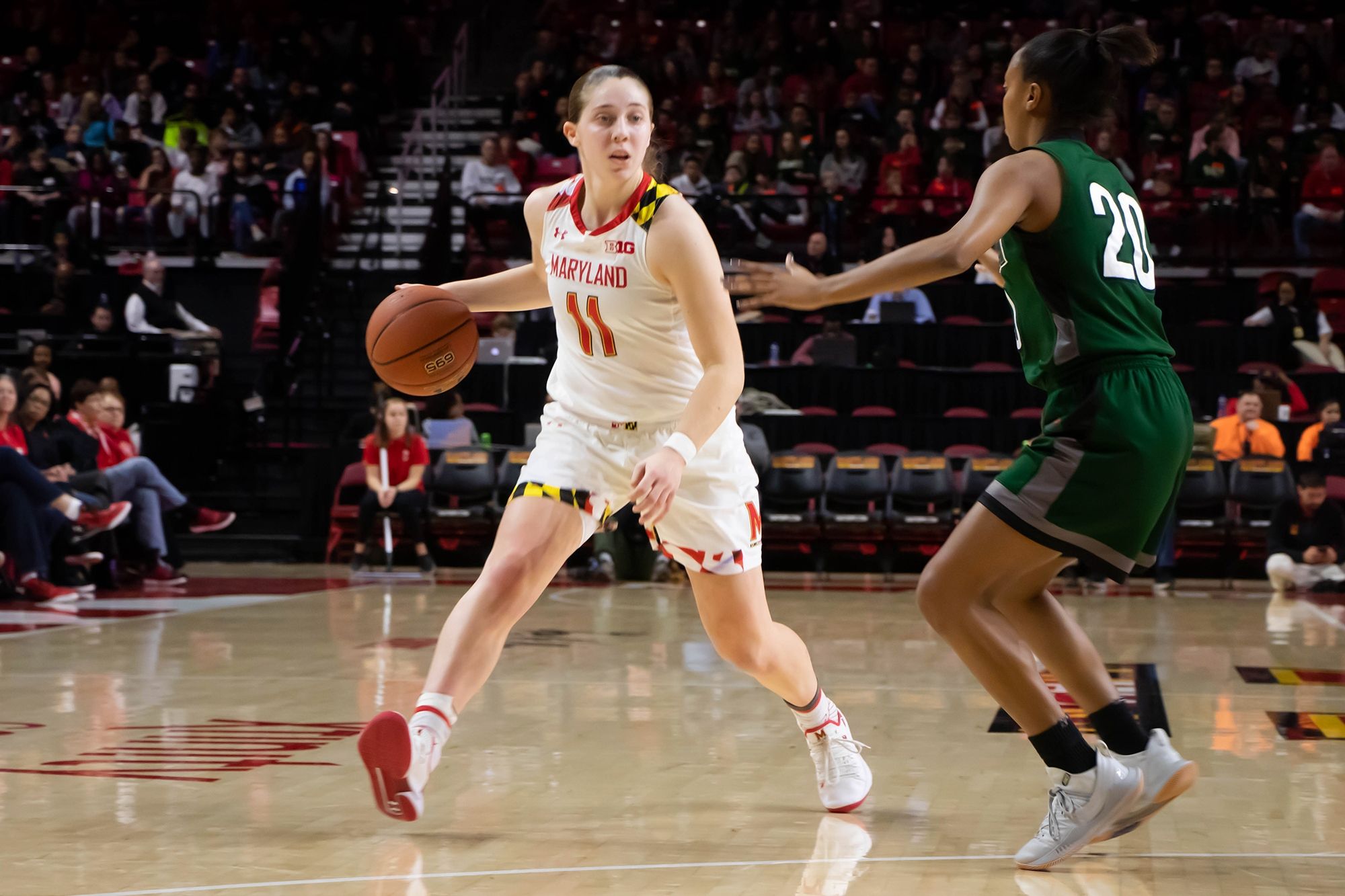 With Maryland women’s basketball leading just 9-8 with less than two minutes left in the opening quarter Monday, the expectedly raucous environment was neutralized by the Terps’ glacial offensive start.

It was “Field Trip Day” in College Park, and more than 6,000 children waiting anxiously for Maryland to finally impose its will against winless Loyola. They wouldn’t have to wait much longer.

Guard Channise Lewis drilled a three from the left wing, forward Shakira Austin finished in traffic, guard Taylor Mikesell sunk another triple, and much to the crowd’s delight, the early-game blitz snowballed into a 21-3 run to give Maryland a 30-11 lead.

And the Terps would go on to rout Loyola, 83-48, as their press eventually overwhelmed the overmatched Greyhounds.

“This is one of our favorite days of the year with a ton of energy and fun in the building,” coach Brenda Frese said. “It’s great for us to be able able to shoot the ball as well as we did today.”

Before No. 6 Maryland (10-0) exercised its physical advantage over Loyola (0-10), however, the Terps began the matchup at an uncharacteristically slow pace.

With just 3:17 left in the opening frame, Maryland only edged the Greyhounds 6-5. And shooting just 2-for-6 from the field, the Terps had few opportunities to set up their vaunted full-court press.

After ending the opening period on a 10-0 run to race in front 19-8, the Terps upped the pressure even further. A pair of three-pointers by Mikesell and guard Sara Vujacic extended the lead to 25-8, and Maryland’s press forced the Greyhounds into 12 first-half giveaways.

The pressure, Frese said, was employed both to limit Loyola offensively and keep her own squad in the game early on.

“Obviously 11 a.m. tip, I wanted to make sure we were awake,” Frese said. “But our press is something we want to be able to go to, and continuing to work on it was a positive for us today.”

The Terps converted those miscues into 21 points the other way in the first half, going into the break leading 45-25.

Mikesell had arguably the best half of her college career, as the freshman netted 14 points on 4-for-5 from behind the arc in the opening period. She finished with a game-high 19 points.

Austin scored 17 points and added 13 rebounds to secure a double-double. She shot 8-for-12 from the field in one of her most efficient offensive showings of the season.

“Taylor and Shakira came out really well with their energy,” forward Stephanie Jones said. “They got us on the board with their defense and ability to score.”

For yet another contest, Maryland stumbled into a second-half slump offensively.

In the prior game, James Madison went even with the Terps in the second half after trailing by 24 points at the break. UMBC went on a 10-2 run after halftime before Maryland grabbed control again, and Georgia Tech outscored the Terps 26-9 in the third quarter to cut a once 20-point halftime lead to just three entering the final period.

The two teams traded baskets to open the third quarter on Monday, but despite the early-half hiccups, Maryland’s aggression defensively never wavered. The Terps defense limited the Greyhounds to just 4-of-16 from the field, and Maryland ended the period on an 8-2 run.

In the final frame, the Terps continued their success from the third quarter. With mostly subs on the floor, they further extended their advantage during a 14-2 run, and Maryland easily dispatched an overmatched Loyola side.

Even with the lopsided triumph, Frese still isn’t content with where the Terps are as just weeks remain before the Big Ten slate.

“This is the first time we get about seven or eight days to finally go back and work on things,” Frese said. “We’re not there yet, we’re still looking to put a complete 40-minute game together.”