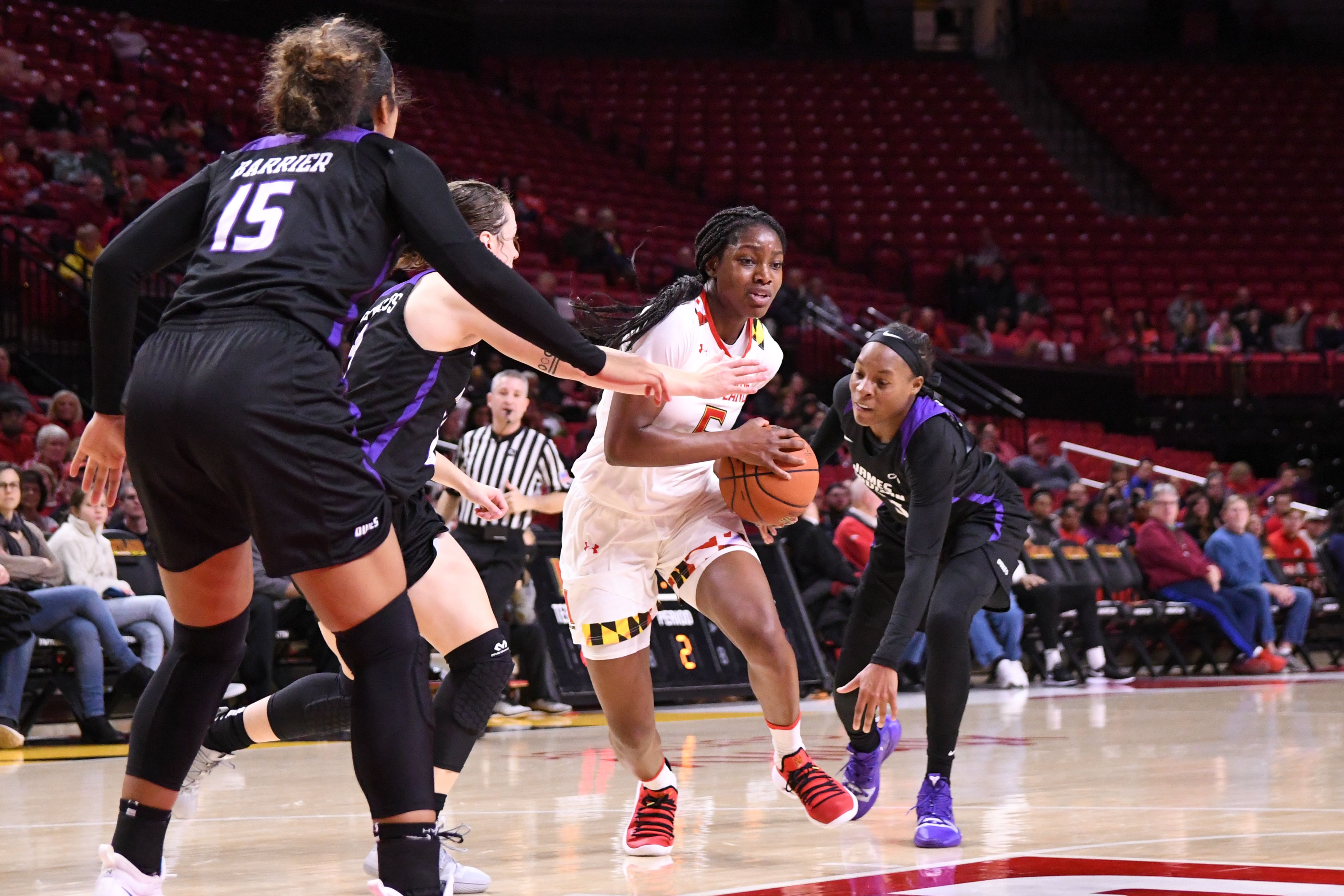 Guard Kaila Charles tries to drive toward the paint during Maryland's 87-63 win over James Madison at Xfinity Center on Dec. 8, 2018. (Alex Chen/The Diamondback)

After Maryland women’s basketball guard Kaila Charles sunk a pair of free throws early in the first quarter, James Madison guard Kamiah Smalls drilled a midrange shot to keep the Dukes within two. It was the beginning of a back-and-forth sequence where the two combined for 12 consecutive points, with each reaching double figures in the opening period.

No. 7 Maryland and James Madison relied heavily on their leading scorers to set the pace early, but as both teams adjusted to limit their opponents’ dangerous offensive threats, one major difference between the squads became increasingly apparent: The Terps are far more than their leading scorer.

The Dukes couldn’t keep up; Smalls eventually slowed and scored just seven points the rest of the game. While Charles had only six points after halftime, her strong start and Maryland’s depth carried the team down the stretch. The Terps dominated James Madison, 87-63, despite a choppy second-half offensive performance.

But before showcasing their plethora of scoring options later in the game, the Terps struggled at the start to keep Smalls in check.

She torched Maryland (9-0) early, quickly showing why she came in averaging 19.6 points a game. Smalls scored her team’s first nine points en route to 11 total in the first period on 5-of-7 shooting.

Then, the Terps adjusted defensively.

In the second quarter, Maryland hounded Smalls on ball screens, and the junior failed to make a basket in the period. She went 0-for-5 after the blistering start, and the Dukes were left searching for answers.

“They started to deny me a little more in the lane,” Smalls said. “Which opened up my side of the floor a lot for my teammates.”

Her teammates, however, combined for just three baskets in the opening half, and the Terps held a dominating 46-22 edge at the break. And with Smalls out of the equation, James Madison (6-2) had no one to turn to.

“I thought she got frustrated when we started to double a little bit,” Frese said. “The defense between Kaila and Blair [Watson] on her … made her take more difficult shots.”

Charles, meanwhile, built off her torrid start with 18 points in the opening half, and she finished with 24 points to tie forward Brianna Fraser for the most in the game. Guard Taylor Mikesell chipped in 16 points, reaching double figures for the eighth time in nine games.

Mikesell drilled a three-pointer on the Terps’ first possession to set the tempo, and her 3-for-5 shooting from beyond the arc in the opening half helped spread the floor for Maryland.

“In the first half [Frese] wants me to be aggressive and make the right play,” Mikesell said. “If I’m open and it’s the right play to make, then I’m going to make it.”

Despite Charles’ limited second-half production, the Terps did enough offensively to overcome their sloppy ball security. Maryland had eight turnovers in the first half and 15 throughout the contest.

Fraser added 11 boards to go along with her season-high 24-point total, which also tied the career-high mark she set against Howard last season. Despite the Dukes’ adjustments defensively, Maryland had too many weapons to contain.

The Terps took their foot off the gas in the second half, but with a 24-point halftime advantage, the result never felt in question.

An even third quarter and a quick burst to open the final period allowed James Madison to claw within 18, but the early-game deficit was too much to overcome as Maryland held on for another routine nonconference victory against an overmatched squad.

“I’m really proud of the consistency and the effort we came out with today,” Frese said. “This week we were able to take a step forward defensively as well as offensively.”