Behind Sepideh Salehi’s artwork featured at the Stamp Gallery 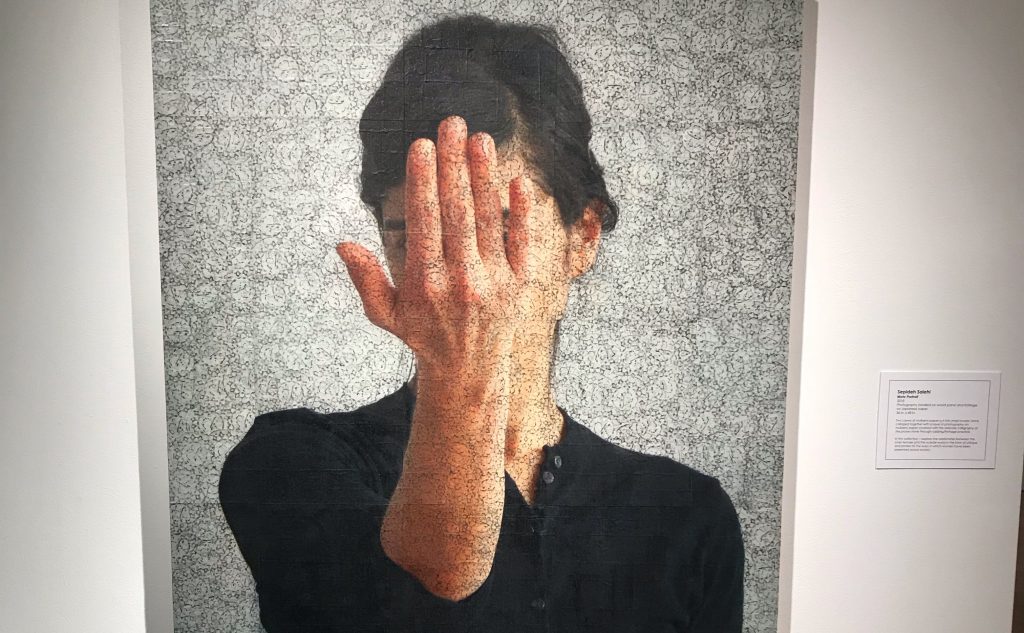 Sepideh Salehi spoke in front of a crowd of almost two dozen people in Stamp Student Union on Wednesday evening to discuss the inspirations and narratives behind her art, some of which is on display at the Stamp Gallery’s current exhibit, “Mirrored Re-Collection.” The gallery also features the work of artist Sobia Ahmad.

Rina Goldman, a senior studio art and theatre major who works in the Stamp Gallery, said the artists were chosen because they were women whose work touches on “identity and the way that gender works in non-American countries.”

Salehi’s style stretches across many mediums, from painting and photography to videography and calligraphy. Her work doesn’t overdo it with a multitude of bright colors. Many of her pieces, such as those in the “Memories” collection, use shades of only black and white. The “Memories” collection is one of her works made in response to the aftermath of the 2009 Iranian presidential election that brought protests and chaos to the streets.

“[Salehi] has this incredible ability to create work that is poignant and evocative, startling and heartbreaking, urgent and necessary — all in 30-second animations or two-minute videos,” Stamp Gallery coordinator Alison Singer said.

Salehi said her childhood in Iran was “marked with unrest.” Much of her early work, such as her “War and Peace” collection, is inspired by her personal life, including having lived in Iran.

[Read more: UMD alums put on “sensory-friendly” concert for those with cognitive disabilities]

Some of her earlier work is repetitive in style, like the “War and Peace” collection, where words are written over and over across paper in Persian calligraphy. The series is inspired by the events of the Iranian Revolution of the late 1970s.

“I love the dreamlike quality that permeates much of her work,” Singer said. “It makes one feel like you can almost grasp her work, but never fully.”

Her series “School” addresses the post-war era when girls could no longer wear colorful clothes or paint their nails and had to wear headscarves.

“As a child and as a woman, all these socio-political changes have affected my life,” Salehi said.

Her video piece “Chador” is a push-back against this “socio-political change,” as it represents the dichotomy between the private and public life of the everyday Iranian woman. It depicts a woman without her veil being documented by covering the camera with a veil, reducing the resolution to grainy silhouettes, almost as if to censor it. When the woman dons her veil around her body, the camera’s veil is then removed.

[Read more: The Clarice’s ‘Citizen: An American Lyric’ is an American reality]

Another video piece, “Strappa,” portrays the disparity between the expectations of men and women. Men are filmed playing the tombak, a Persian drum, while women are filmed tearing fabric. The interspersion of the clips and the usage of vastly differing sounds create a captivating sight.

Salehi’s work has had two major evolutions: One was when she moved to Florence, and the second was in 2009, with that year’s Iranian presidential election. She began to address the confrontations that occurred between Iranian police and civilians more often. Such themes are evident in her series “Women.” This change also marked a transition of Salehi working more with photo-based imagery than with her scriptwriting styles.

“I’ve rarely seen portraits that are handled so delicately and beautifully, yet make such a powerful statement the way the women in the portraits deny us our right to meet their eyes, thus diverting our gaze,” said Singer, a doctoral candidate in the art history and archaeology department.

Her styles of precisely fine calligraphy and photo-based imagery are melded together in the collection “Mohr Portrait,” which explores the socio-cultural representation of women in society. “Mohr Portrait” is one of Salehi’s collections featured in “Mirrored Re-Collection.”

“Mirrored Re-Collection” will be exhibited in the Stamp Gallery until Dec. 15.