After a semester of chaos, UMD can’t go back to normal 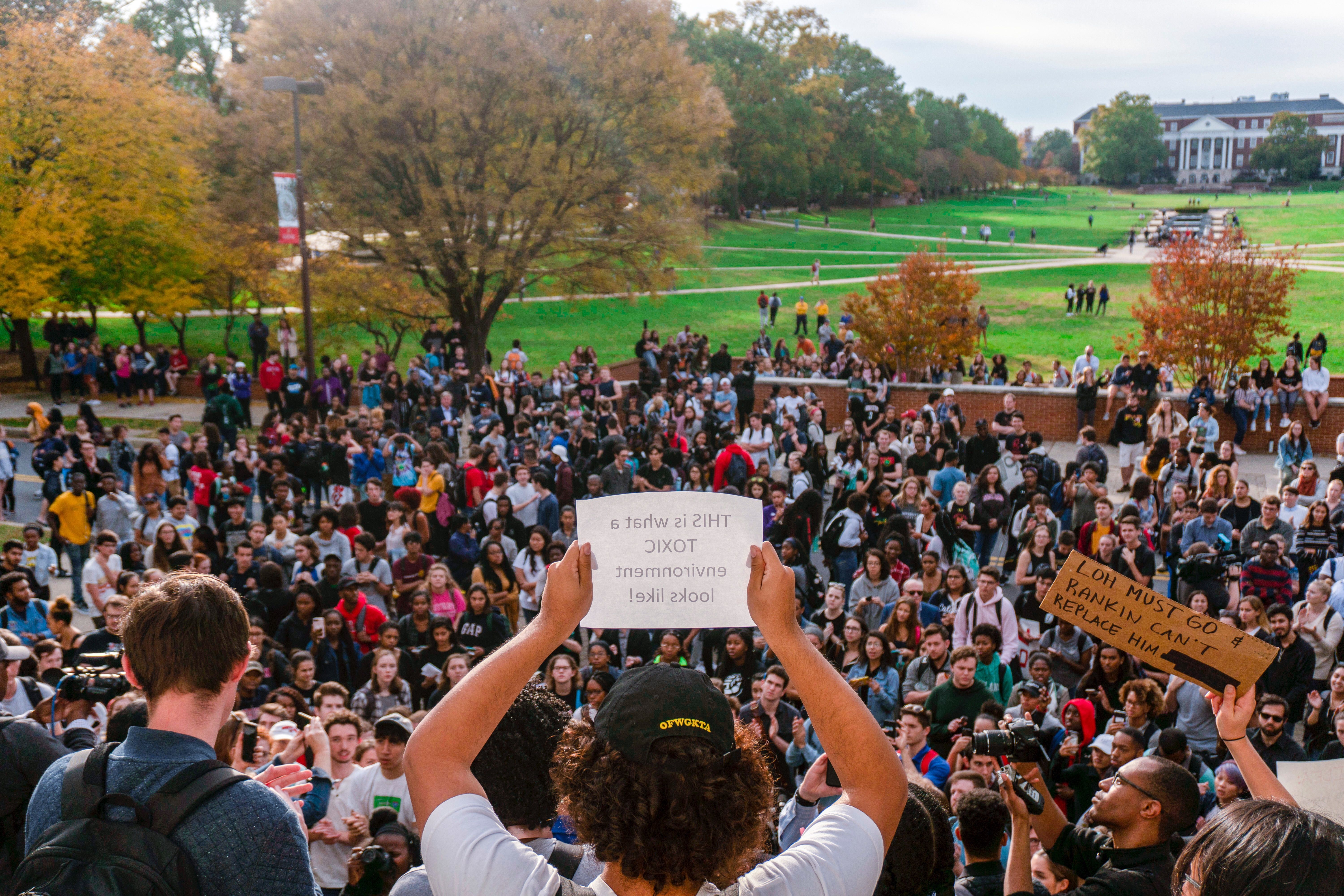 A crowd of students gathers in front of the Main Administration Building during the “Justice for Jordan” protest on Nov. 1, 2018. (Jon Orbach/For The Diamondback)

Controversy consumed the University of Maryland this semester — and it wasn’t about just football.

Of course, that scandal drew national attention, claimed the job of the team’s head coach and caused the university president’s planned retirement in June. But this semester also saw activists protesting this university’s cooperation with U.S. Immigration and Customs Enforcement. A counseling group for white students, originally called “White Awake,” made national news. A mold epidemic forced the evacuation of Elkton Hall and affected several other dorms. And the university’s communications shop created its own state media outlet.

It’s been revealing and exhausting. As we approach the end of the semester, it’s useful to look back at the dumpster fires in our rearview mirror and take some constructive lessons out of the chaos. In that spirit, I’ve put together three short takeaways from this university’s wildest semester in a while.

Throughout the semester, bullshit has been in the air. Ground zero of this university’s bullshit epidemic is its Office of Strategic Communications. The office produces Maryland Today, a deeply dystopian publication created to put a happy face on various university missteps.

The office works hard to maintain message discipline among university officials. The message? Maryland is doing a great job fulfilling its mission as a premier research university! The reality was laid out by former interim chief diversity officer Roger Worthington, who said he left his post because he’s “a better, more effective member of the community … without [The Office of] Strategic Communications saying, ‘Here is what you can say and here is what you can’t say as an administrator.’”

Smiling through scandal is, it turns out, not a great communications strategy. Most people are pretty good at sniffing out bullshit and don’t take well to being spoken to like a moron. If the next administration wants to build trust with students, it should remove the public relations gloss and stop making officials speak like they’re in a ransom video.

Throughout the semester, this university has displayed a persistent inability to uphold fundamental moral standards. It continues to cooperate with some of the most despicable institutions and individuals in the country.

As the #MeToo era brings accountability for sexual misconduct, the journalism college hosted communications flack Michael Sitrick (aka “The Fixer”), who’s represented Chris Brown and Harvey Weinstein. As bombs made by Lockheed Martin slaughter Yemeni civilians, the University System of Maryland Board of Regents selected a former Lockheed executive as chair. As the Trump administration tears immigrant families apart, this university continues to have an active contract with ICE, which deported more than 200,000 people in the 2017 fiscal year.

These are not challenging moral questions. Don’t pal around with someone who defends high-profile sexual predators. Don’t create a contract with the federal government’s primary arm of mass deportation. Don’t work with companies that help blow up buses full of children. Anyone with a conscience could tell you this.

Don’t go back to normal

This university’s scandals revealed foundational brokenness — brokenness that should prompt comprehensive reform. That’s why some of this semester’s most frustrating moments featured campus leaders urging a return to normalcy.

After university President Wallace Loh finally canned football coach DJ Durkin, Student Government Association president Jonathan Allen bafflingly called Loh “courageous,” and the SGA turned a scheduled protest into a pep rally for the football program. A couple of weeks later, Loh told The Diamondback, “[The focus is] not on what happened in the past two weeks — that’s behind us.”

Bad events, to state the obvious, have bad causes. Attempts to go back to normal ignore the fact that the status quo produced the abnormal events of this semester. If we don’t abandon the instinct to return to normal, future semesters will resemble this one. If Loh’s replacement stays the same course, the scandals will just keep coming.