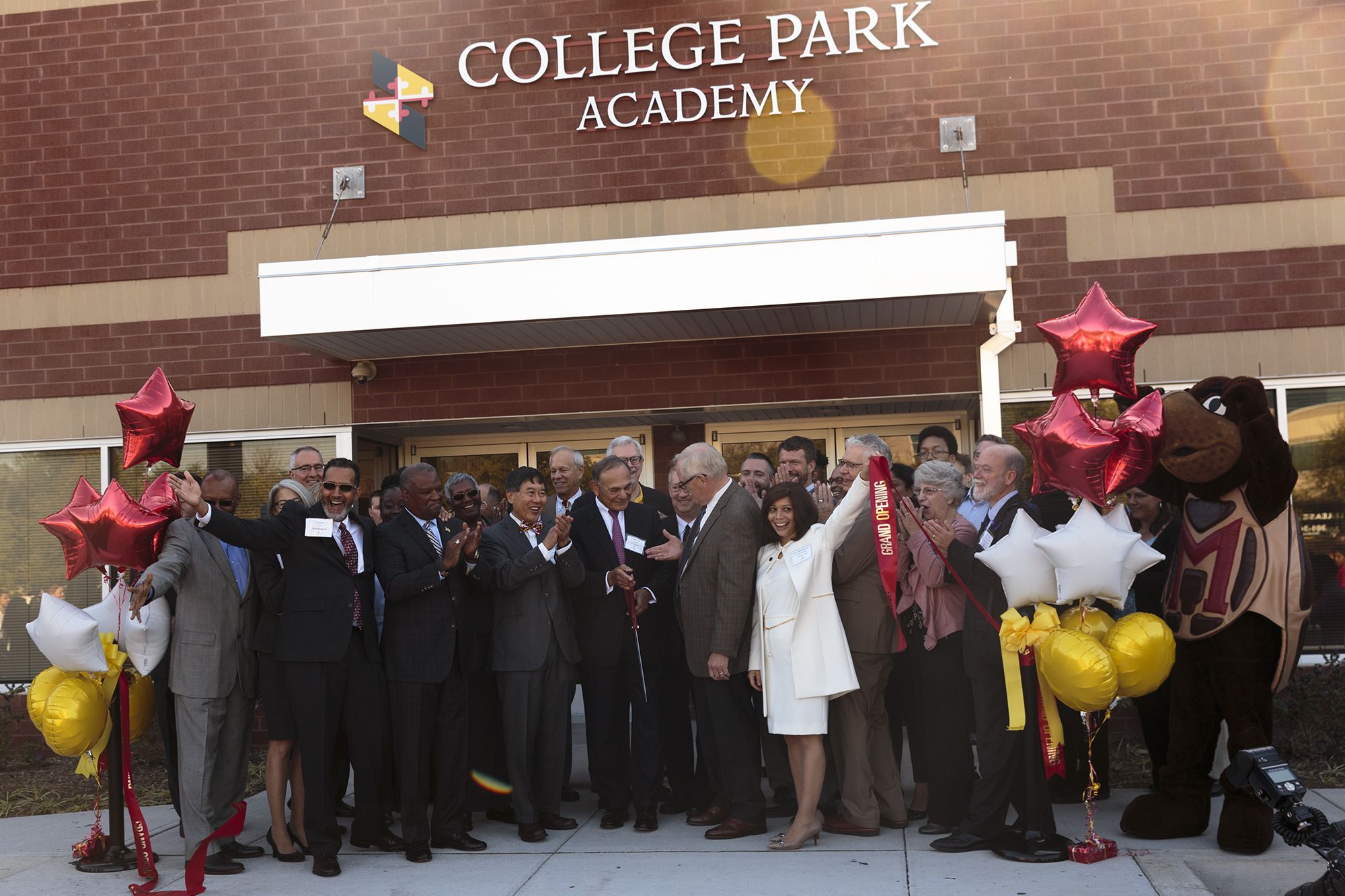 University of Maryland President Wallace Loh has big plans to develop College Park into a world-class college town. We’ve seen the Edward St. John Learning and Teaching Center, MilkBoy ArtHouse and The Hotel pop up in the last few years as part of that vision.

The architects of the Greater College Park plan hope to recruit world-class faculty by building a community that caters to their interests. Instead of creating affordable housing for students, they are building luxury condominiums geared toward higher-earning university professionals. To ensure that those professionals stay in College Park, Loh came up with a plan: create a charter school.

The College Park Academy first opened in 2013 and relocated to a permanent building in the Discovery District in 2017. In 2017, the school served over 550 students from sixth through eleventh grades, and will soon become a sixth through twelfth grade middle and high school.

The school uses blended learning, an increasingly popular instructional method. With a curriculum designed by Pearson, one of the largest education corporations in the country, students at CPA are given online lectures to view at home, then come to class to apply what they have learned with feedback from the teacher.

The school also offers a wide variety of extracurricular activities, from cheerleading to robotics, many of which are facilitated by undergraduates at this university. And to its credit, the school reports stellar scores on standardized tests.

There’s nothing immediately wrong with wanting to improve the university community, recruit faculty or build a new school. Yet something feels hollow about its success. Perhaps it is the images of student ambassadors dressed in Maryland flag-patterned bowties just like Loh, or perhaps it is the fact that the school’s most vocal supporters seem to be elected officials and private donors from the Edward St. John Foundation, not parents. A look at the data and the demographics makes it clear that the school is not serving Prince George’s County students equitably.

Initially, the academy was intended for children of members of the College Park community, especially the children of the faculty members that Loh hoped would settle down in College Park. Yet a Maryland charter schools rule states that such schools “must be open to all county students and must admit students by lottery if more apply than can be enrolled.”

Early in CPA’s history, school leaders tried to change the school from a charter school to a contract school, so they could request that 50 percent of the seats be reserved for children of College Park residents employed by the university. That request was denied by PGPS chief Kevin Maxwell, who reminded the school that charter schools are not allowed to reserve seats for residents of a certain area or students of certain employees.

Regardless, the school forged ahead and has since reserved 35 percent of its seats for students from College Park. Though the academy’s students may score higher on tests, the academy also serves more white students, fewer Latinx students, fewer low-income students and fewer English language learner students than the rest of the county’s schools.

In addition, CPA does not provide transportation to its students. Even if other students do get into the school through the county-wide lottery system, transportation barriers would make it difficult for children from households where both parents work to attend CPA. Each of the after-school activities that the school offers comes with a $50 semesterly fee, adding an additional barrier for students from low-income families who can’t rely on their parents to pick them up at 3 p.m. and denying students the resources instrumental to their success.

CPA diverts resources away from Prince George’s County’s most vulnerable students. It is an experimental laboratory in which Loh and elected officials seek unilateral control over curriculum and leadership decisions to benefit their own friends and colleagues.

By serving the children of university faculty, they are implicitly valuing the lives of children from wealthier, higher educated backgrounds over those of their peers. Creating a shielded pipeline through which the university can funnel those students that it deems worthy into its classes to increase its rankings is classist and discriminatory.

To truly fulfill its educational mission, create opportunities for area students, this university should instead be investing in the entire county’s student population and reforming the educational system consistently across multiple schools rather than hoarding resources for its own.