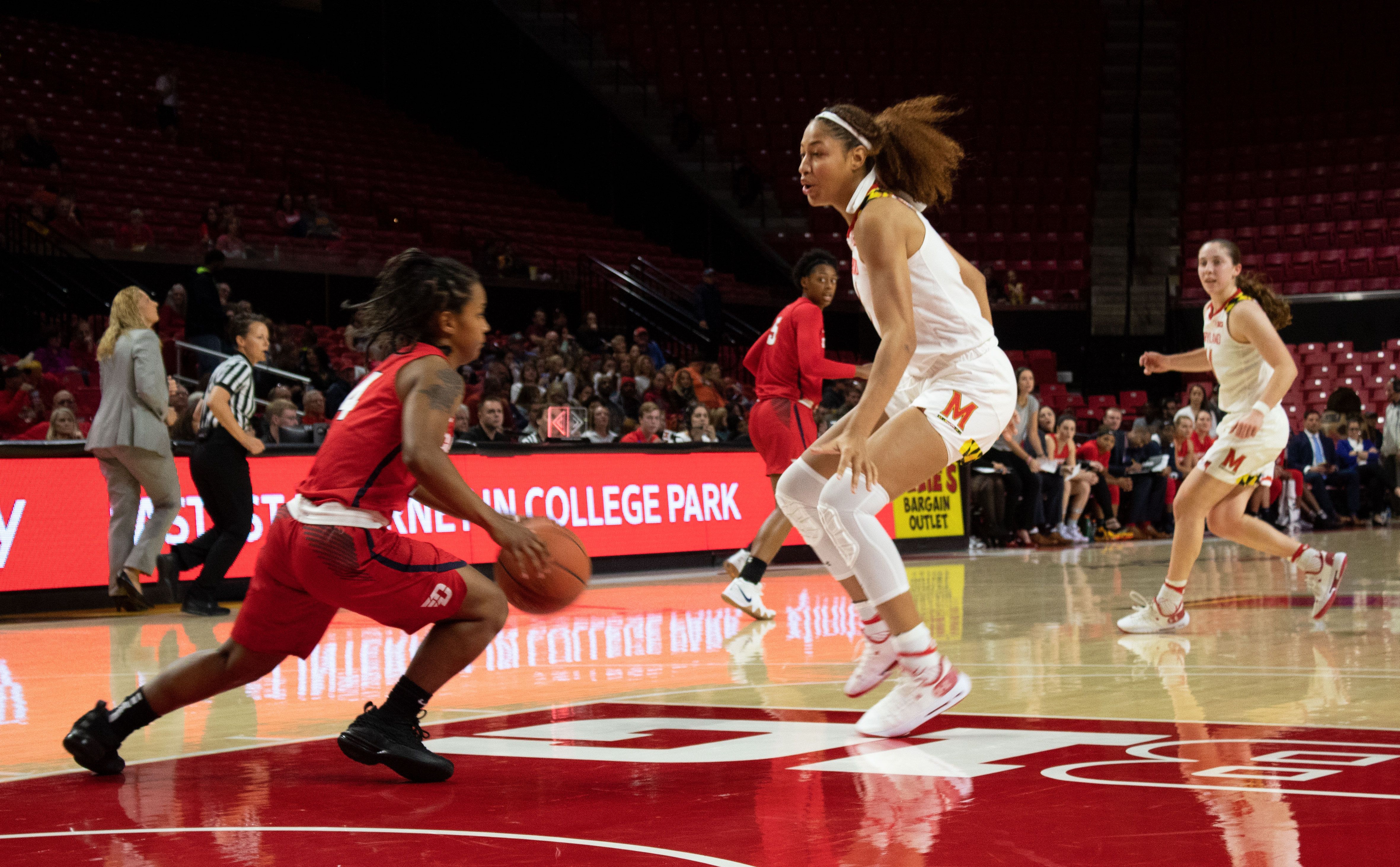 During a Maryland women’s basketball meet-and-greet with fans following the team’s 93-36 win over Coppin State on Friday, forward Shakira Austin was asked whether she prefers offense or defense.

Earlier in the evening, Austin swatted away a team-high seven shots, one off the program record, and grabbed 21 rebounds. Using every bit of her 6-foot-5 frame, she completely dominated the Eagles’ smaller front line.

Grasping the microphone, the talented freshman paused for a moment to contemplate her response before addressing the fans at Xfinity Center. And, as her teammates offered knowing smiles, Austin admitted she preferred the defensive side of the game.

For a highly touted McDonald’s All-American recruit who has been streaky on the offensive end in the early stages, a passion for defense should prove to be a major difference-maker. But whether she’s denying opposing scorers or laying it in over smaller frontcourts at the post, Austin projects to be a vital tool down low.

“She’s got such a huge ceiling,” coach Brenda Frese said. “She’s special, she gives us a dynamic we don’t have at 6-foot-5. Her motor and her energy, I think her offense will catch up. Her defense is ahead of her offense.”

On offense, Austin has been serviceable but not spectacular through two games.

In No. 9 Maryland’s victory over the Eagles, Austin finished with 12 points on just 3-of-11 shooting. Several of her 21 rebounds came after she corralled her own missed putback attempts under the basket, playing catch with the rim until she eventually laid it in or was sent to the line.

Austin was significantly more efficient in the Terps’ 82-71 win over Dayton on Sunday, scoring 14 points on an improved 5-for-8 clip from the field. But with just six rebounds and four turnovers — after giving the ball away just once Friday — it was apparent the Flyers’ size was unfamiliar to her in what was just her second regular-season game.

“We said before the game [against Dayton] she was finally going to be going against some length, that it might look a little different for her,” Frese said. “She’s still going to have to get used to the physicality.”

No matter how long it takes for her offensive game to pick up, the Fredericksburg, Virginia, native’s defensive impact is unquestionable.

She made three steals, the second-highest total behind guard Blair Watson’s five, in just 22 minutes. As a team, the Terps stole possession 13 times and pressured the Flyers into 20 turnovers. The athletic Maryland squad converted those miscues into 28 points off giveaways and 38 points in transition.

“Her length helps on the ball, rebounds, she makes a big impact,” guard Kaila Charles said. “Especially at the top of our press, she’s getting a lot of deflections and steals. … She helps a lot.”

But for Austin to continue to make an impact when she goes up against better competition, she must improve the offensive component of her game. Frese started the freshman off the bench in both regular season contests so far, and with a matchup with No. 10 South Carolina looming on Sunday, her last chance to get reps will be against George Washington on Wednesday.

“For the competition and knowing what we have coming up, bigger teams coming up to play us,” Austin said, “we have a lot to grow and a lot more to learn from.”