An ode to sticky note window art on campus 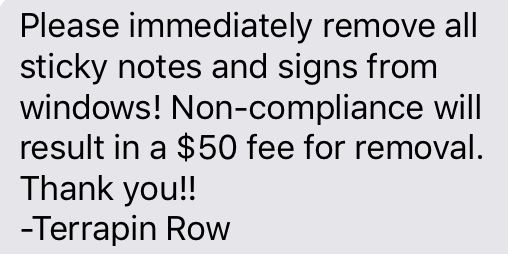 Besides rubbing Testudo’s nose and not stepping on the point of failure, there’s not really any campus culture at the University of Maryland. There’s nothing that unifies students beyond the fact that we all happen to go to the same college.

Which is why I found it so outrageous that some students — including myself — were having one of the only means of creative expression available to them taken away. No, not the culinary arts — College Park has no grocery stores and the only thing we’ve got is pizza anyway. No, not film — the city doesn’t have a real movie theater either. No, not sports — no one went to any games before this whole situation happened.

On Friday, I received a message from Terrapin Row saying any students that kept up sticky notes up in their window would incur a $50 removal fee — even though the sticky notes people put up to spell out messages or make art are on the inside of the window and do nothing but good.

Why did they do this? I didn’t ask, I’m not a news writer any more, I’m a diversions editor. But one can only assume that this crackdown on artistic expression won’t be contained to just Terrapin Row for very much longer, so I set out and looked for the best sticky note window art on campus — while we can still enjoy it.

A bold political statement found on South Campus that has since been removed and replaced with another message. It’s a Donald Trump quote from when Kanye was a vocal supporter of the President. By presenting the Presidential message in sticky note window art form, the artist certainly is saying something about politics, which is more than most of the citizens in this country can say.

This piece is a good way to prove that sticky note window art is just like giving your entire dorm or apartment a big novelty t-shirt you bought from a mall kiosk on vacation. There’s no reason for you to advertise to everyone the Nike logo and slogan, it’s one of the most recognizable things in the world. Are you just a big Nike fan? Get the company to pay you to get the slogan tattooed on your body like a normal person. Is this in support of Colin Kaepernick? Then spell out “#BlackLivesMatter” with sticky notes. Are you a Nike sales rep? Use your sticky notes to annotate stuff in a sales report or whatever. There’s an infinite number of works of art you could create with sticky notes in your window, and this is what you choose?

On their own, neither work of art in this picture is that good. But when pictured together, it sounds like a The Lumineers song which I think is kind of funny. Art has been about context since the invention of the camera made photorealism a boring concept. I embrace this.

This is up on Prince Frederick and I don’t like it. It’s no longer any fun once the grown ups catch on to the trend, and it’s pretty clear the RAs or whoever in charge made a concerted effort to put up all the video game-themed sticky note window art. Also if you ever played Pac-Man as a kid like me (my cousins in New York had an arcade machine that I’d play on whenever we visited and it was so hard that I thought there was only one level to the entire game; when I finally beat it and found out there was more I just walked away and never touched the game again) you’d know that this is not a valid layout for the ghosts to be in because the ghosts are all programmed uniquely and don’t just scatter about randomly like they’ve depicted it. Get your source material right.

Someone told me that the word on the street is that, allegedly, this sign apparently went up because the students in here supposedly wrote “send nudes” in sticky notes in the window, reportedly. So now this artwork is a scathing critique on censorship of art in American society, whether the artists intended it to be or not. It’s an omen of things to come, if recent events are any indication.