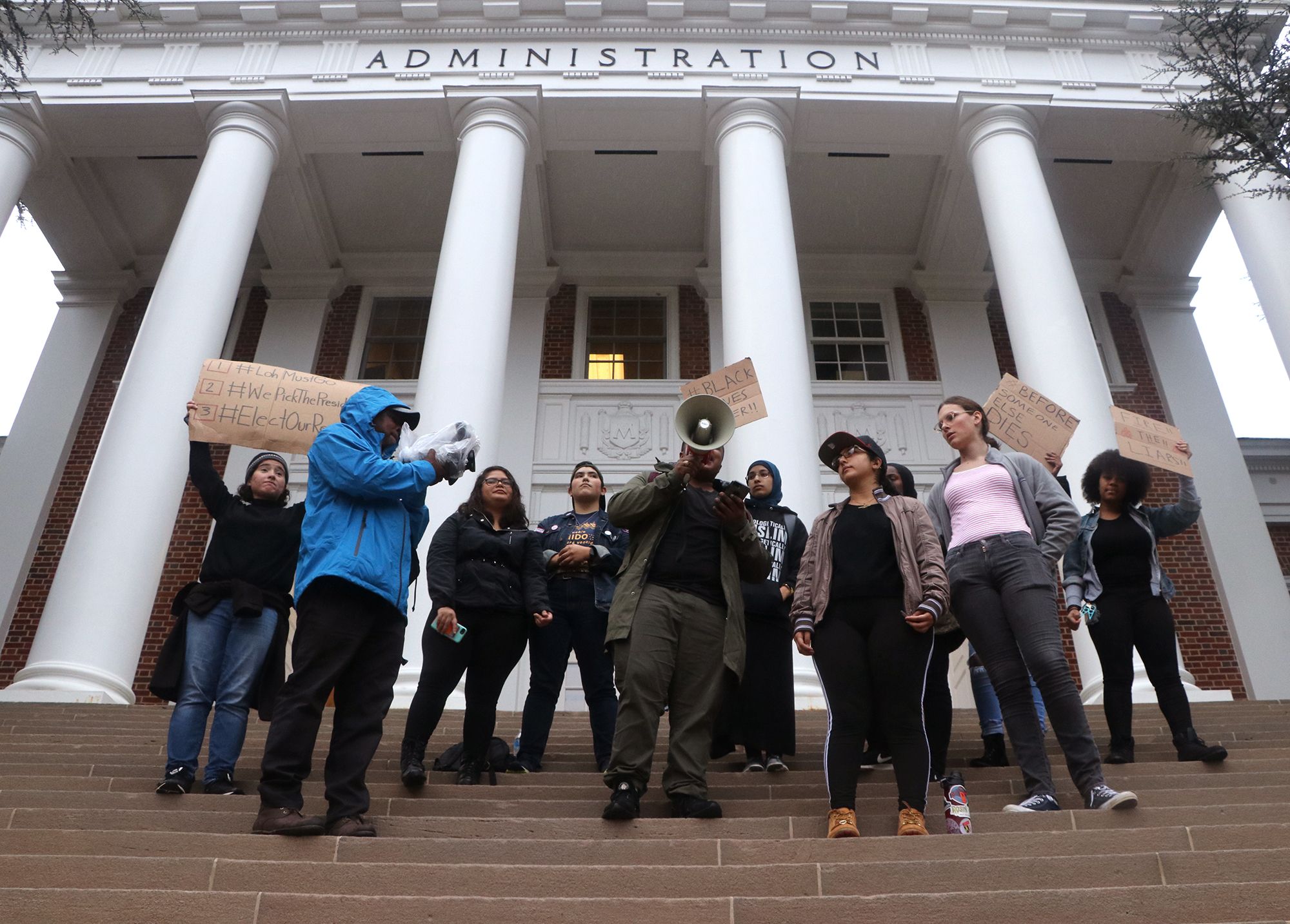 Students took to the steps of the Main Administration Building at Monday's protest, holding signs with messages like "Loh Must Go." (Julia Nikhinson/The Diamondback)

Paula Molina Acosta stood atop Testudo’s pedestal in front of McKeldin Library on Monday, megaphone in hand, as she addressed a crowd of University of Maryland students, faculty and staff.

This disillusionment from the university’s leadership prompted a coalition of 24 student groups to organize the rally at which she spoke, called “Fire the Liars.”

On a campus still reeling from a report on its abusive football culture and the lack of oversight that enabled it, the rally demonstrated how the death of offensive lineman Jordan McNair reopened an array of wounds among the student body.

“[The administration has] never really met our needs,” said Trey Huff, the president of this university’s National Pan-Hellenic Council. “They’ve shut the door in our face.”

Student speakers from sponsor groups such as Political Latinxs United for Movement and Action in Society, UMD Socialists and the Muslim Alliance for Social Change took turns addressing the crowd — first in front of McKeldin, then, after a march, on the steps of the Main Administration Building. Their words were interspersed with chants of “student power” and “black lives matter.”

In each of the last two years, the campus community has been rocked by the death of a black student — the stabbing of 2nd Lt. Richard Collins last year, and more recently McNair, who suffered fatal heatstroke at a team workout in May.

After McNair’s death, the university commissioned two investigations. The first, which completed its work in September, found the team’s training staff failed to diagnose and treat him properly, leading to his death. The second found that mismanagement of the athletic department — by university President Wallace Loh and athletic director Damon Evans, among others — allowed an abusive culture to take root within the football program.

Despite the findings of the latter investigation, the regents recommended that Durkin and Evans keep their jobs, while Loh announced he would retire in June. But after backlash from students and faculty, as well as state politicians, Loh fired Durkin on Wednesday, and regents chair James Brady resigned a day later.

The coalition published a list Thursday with three demands for this university’s administration and the Board of Regents, whose members are governor-appointed and set policy for the 12 member institutions of the University System of Maryland.

At the rally, they reiterated those demands — that Loh remain committed to retiring, that his successor be selected with student input and that the regents be democratically elected by students.

“The solution is to change the system,” said Alexandra Melinchok, a junior economics and government and politics major. “We need to change the way decisions are made on this campus, because it’s clear the people who are making them don’t have our best interests.”

In May 2017, Collins, a Bowie State University student, was stabbed to death while waiting for an Uber at a campus bus stop. Sean Urbanski, a white former student at this university, is currently awaiting trial on murder and hate crime charges in the killing.

Huff, a senior biochemistry major, said the administration failed to deal with a spate of hate bias incidents on the campus leading up to Collins’ death — such as the discovery of a noose in a fraternity house, white supremacist posters and graffitied swastikas.

The university appointed a hate bias response program manager after Collins’ death and hired a firm to conduct an external review of diversity on the campus. But that review has yet to be released, prompting chants of “release the review” Monday.

Molina Acosta, PLUMAS’ vice president, said the group originally planned a Thursday rally as a protest of the university’s contract with U.S. Immigrations and Customs Enforcement, which has drawn widespread criticism from student activists.

Molina Acosta said the coalition of student groups realized “there was a need to come together, and we needed to make change in the institution itself,” thus spawning Monday’s rally.

On Thursday, the Student Government Association, the NAACP, College Republicans and Democrats organized the “Justice for Jordan” rally in support of student-athletes.

But midway through that rally — where SGA President Jonathan Allen passed out tickets for Saturday’s home game against Michigan State — attendees overran the speakers with chants of “boycott.”

Those chants returned at Monday’s protest. As Allen watched from across the street, a student yelled at him, “This is how you run a rally.”

Though Allen said he “respectfully disagreed’ with calls for a boycott, he added that he’d “always advocate for students when they speak up for what they believe in.”

Allen said he supported the coalition’s demand for the university’s next president to be selected with student input and would recommend the system do so at the next meeting of the its student advisory council.

Still, Molina Acosta said the coalition of groups that made up Monday’s rally were just getting started.

The International Socialist Organization at this university will be hosting a discussion on “why the university continues to put profit over students’ lives” Wednesday. At the rally’s conclusion, students covered the administration building’s front doorway with the flyers.

“This rally was designed to get the word out, to organize a consciousness of what’s going on,” Molina Acosta said. “You’ll be hearing more from us soon.”