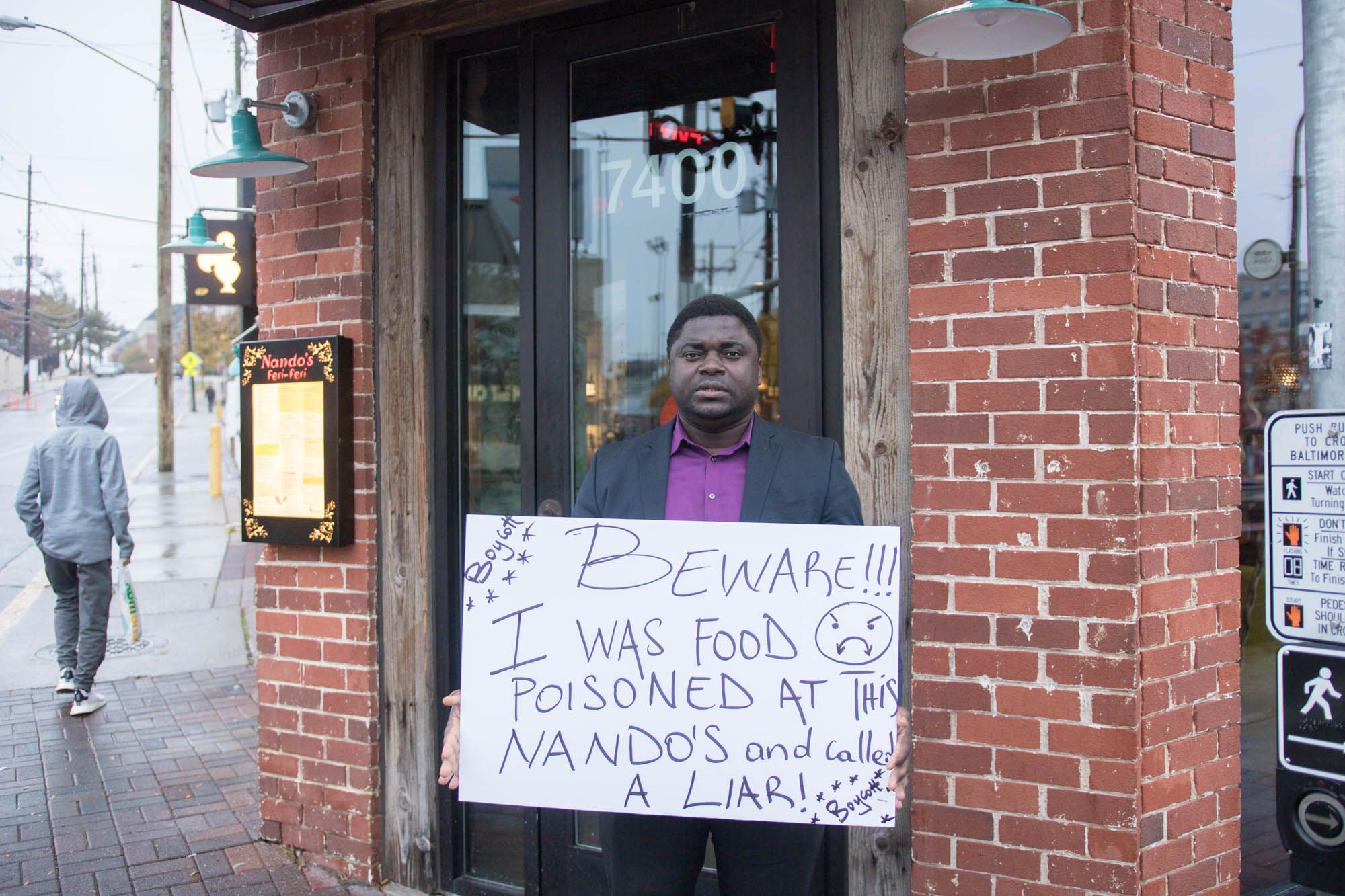 Willy Njeh protests in front of Nando's on Route 1 on Nov. 5. Njeh said that he and his wife got food poisoning after visiting the restaurant. (Richard Moglen/The Diamondback)

Willy Njeh spent about two hours in the rain Monday outside Nando’s Peri-Peri, one of his favorite restaurants, holding a sign that read “BEWARE!!! I WAS FOOD POISONED AT THIS NANDO’S and called A LIAR!”

The 37-year-old College Park resident said he and his wife ordered take-out food after work on Oct. 12. Njeh said the chicken and coleslaw dishes they ate “tasted kind of funny,” and within a few hours, they both began to feel ill, with symptoms lasting for a few days.

A letter from the restaurant’s insurer — Erie Insurance — denied his claim, as the insurer’s investigation “did not reveal any negligent action” on Nando’s part. The letter noted that Njeh didn’t seek medical treatment, return the food or contact the health department.

Even though Njeh didn’t reach out to the department, officials did find issues at the restaurant during a separate inspection, including mouse droppings and fruit flies.

Nando’s was one of more than 60 food service facilities in College Park that were cited for health code violations between Aug. 1 and Oct. 16, according to online data from the Prince George’s County Health Department.

Copies of the food inspection reports, obtained by The Diamondback through a public information request, revealed the nature of the violations of some of the city’s most popular eateries.

Several of the infractions were “critical violations,” which are the most serious violations because they’ve been shown to cause foodborne illnesses, said Debra Freeman, acting chief of the county’s Food Protection and Policy Program.

A critical violation must be corrected while the inspector is on-site; otherwise, the facility is immediately closed until the issue is resolved, Freeman said.

Potbelly Sandwich Works was cited for a critical violation during an inspection on Sept. 4, because its meatballs weren’t being kept at the proper temperature, the report said. In addition, “a large amount of droppings” were found “throughout the facility,” according to the report.

“It’s the temperature control that’s really important for preventing illness,” she said. “The insects can add to the contamination, but if it’s cooked enough and kept at the right temperature, then it’s not going to cause illness.”

Freeman paused, then added, “It just might be pretty disgusting.”

The Subway at 7411 Baltimore Ave. also had a critical violation. The restaurant’s soups were not reheated sufficiently before being placed on the steam table to keep warm before serving, according to the report. The issue was corrected by rapidly reheating the soup, the report said.

Representatives from both Potbelly and Subway did not respond to two emails requesting comment.

On Aug. 23, an inspector cited Ledo Restaurant on Knox Road for a critical violation when he found that ingredients on the pizza prep table weren’t being kept cold enough.

The pizza prep table wasn’t functioning properly, allowing warm air to come in, according to the report. By the time inspectors returned on Sept. 12, though, the table had been fixed.

The August report also indicated a Ledo employee was not wearing a hair restraint.

Tommy Marcos, one of the founders of the restaurant, said in an email that it’s “a good thing” food inspection reports are made public.

“It makes us work that much harder to try to always comply with the codes,” Marcos wrote. “There are no excuses for a violation[,] just an effort to work even harder to always be safe for family, employees, and our customers.”

Maddie Driscoll, a freshman art history major at the University of Maryland, said she’d rather know about the violations, even if she didn’t like what she heard.

Although she doesn’t eat out often, she said she will continue to do so, “as long as Pizza Kingdom is clean. And Marathon [Deli].”

Pizza Kingdom was not cited for any violations between Aug. 1 and Oct. 16. Marathon Deli was cited for not having paper towels at hand washing stations.

Several “good retail practices” violations, which are less serious than critical ones, were also cited during a Sept. 27 inspection at Nando’s Peri-Peri. The inspector found mouse droppings in the office room, fruit flies near the beer taps and dishwashing area and deep cuts and damage to the chicken cutting block, which could promote the growth of bacteria and increase the chance of foodborne illness.

“Nando’s takes the health and safety of its customers very seriously,” Sepanta Bagherpour, vice president of marketing for Nando’s, wrote in an email. “When we learned about the issues at our College Park restaurant, we immediately performed an exhaustive cleaning of all surfaces and implemented corrective measures. All issues at College Park have now been remediated, and we are confident the restaurant will pass re-inspection with flying colors.”

At the Bagel Place of College Park, “large amounts of mouse droppings” were found in the basement area during a Sept. 5 inspection.

Robert Karanovich, the owner, said the mouse droppings were found near a trash can in a basement area shared by several of the neighboring businesses. He said no food was stored in that area.

Justin Wisor, a senior chemical engineering major, said the reports of rodents in College Park restaurants probably won’t prevent him from eating out. As someone who has worked in the food service industry, he said it’s not uncommon to see evidence of mice in restaurants.

Other violations of good retail practices were found throughout the city, although those businesses did not reply to multiple emails requesting comment.

On Oct. 2, “slime mold” was found in the soda fountain ice dispenser in the 7-Eleven located at 8600 Baltimore Ave., and on Sept. 25, mouse droppings were found “throughout the rear of the facility” at Aroy Thai.

More than two dozen violations, including mold and the presence of fruit flies, house flies and ants were found during a change of ownership inspection on Aug. 2 at Pizza Boli’s.

After the county received a complaint that a customer observed mouse droppings in the lobby at IHOP, a county official inspected the restaurant on Oct. 16. The inspector did not find any mouse droppings, but the inspection did find minor good retail practices violations, such as restaurant workers not changing gloves often enough.

Geoff Trout, the owner, touted the condition of his restaurant. He said the violations on his report, such as damaged floor tiles and a hand sanitizing station hung too high, are minor in the overall quality of his establishment.

“The primary thing is — with the food safety inspection — is that we’re serving safe food,” Trout said. “That’s number one. If you look at that report, we’re above reproach on that and we watch it very carefully.”

The county also received a complaint about Shanghai Tokyo Cafe. A customer reported that they had received spoiled salmon and that the restaurant used vinegar to attempt to mask the taste.

During an inspection on Sept. 20, inspectors found that the salmon at the restaurant was being held at the proper temperature and that there were “no obvious signs of spoilage,” the report said.

Zhong Chen, the owner and manager of the restaurant, said the complaint was “not accurate” and that the restaurant goes through its supply of salmon every day, with the high turnover making it unlikely to spoil.

Chen said he feels that, sometimes, customers make a complaint just because they don’t like the food, instead of asking for their money back.

“That creates a lot of problems,” he said.

Aliya Daniels, a freshman communication major, said she was surprised to hear about some of the violations. She said she normally eats out about once per week and may consider just eating out once every two weeks now.

“I’m going to think twice about it,” she said.

Despite being in a college town, College Park restaurants are average in terms of food inspection violations, Freeman said. Compared with the rest of the county, she said she doesn’t notice any trends that are different in the city.

“There’s probably more pizza places per square mile in College Park than the rest of the county,” Freeman said. “But as far as trends in violations and compliance, I don’t really notice any difference.” 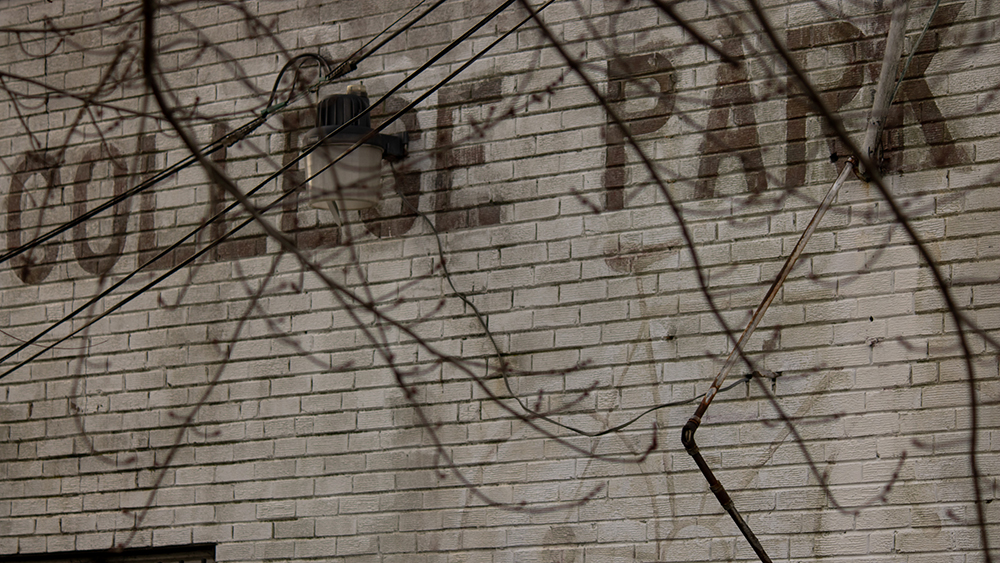 Various types of COVID-19 tests are offered at and around UMD. Here’s how they differ.