The Fire the Liars organizers are right: The Board of Regents should be elected 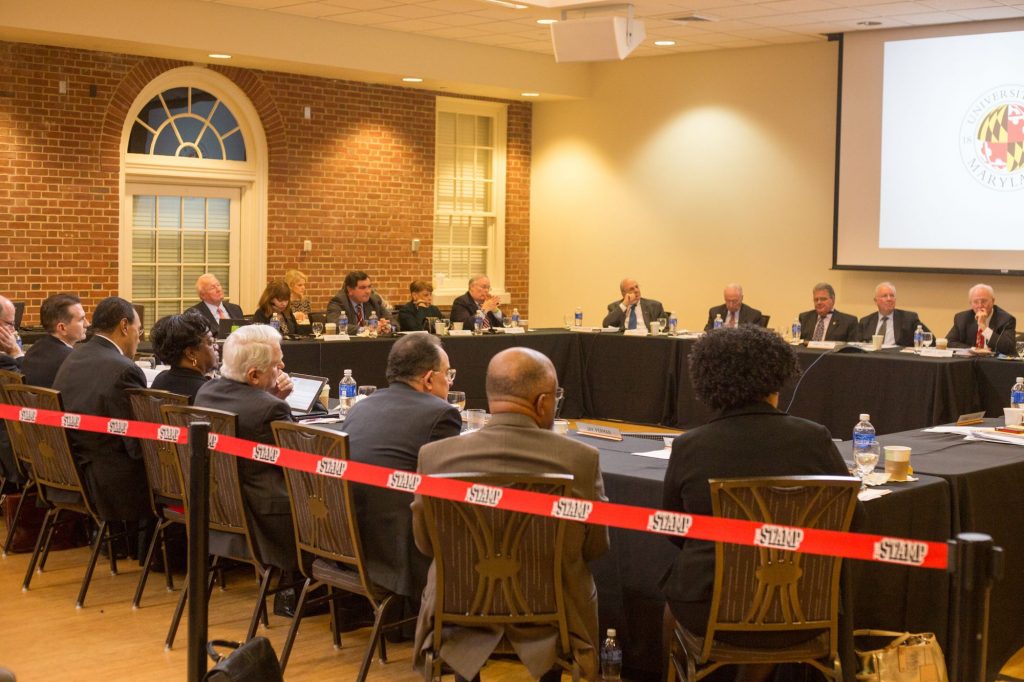 The University System of Maryland Board of Regents sit in a special meeting held in the Atrium in Stamp Student Union on Dec. 11. (Tom Hausman/The Diamondback)

In the wake of all that has occurred at the University of Maryland over the last week-plus, it’s no surprise that yet another rally is in the works. On Monday, there will be another demonstration in front of McKeldin Library. This demonstration, called “Fire the Liars,” will be led by a coalition of student groups that does not include the Student Government Association.

The coalition has three demands they wish to convey through the demonstration: They want President Loh to keep his “commitment to resignation”; they want students to have a significant role in determining future presidents; and they want the Board of Regents to become a democratically elected body through a process that involves students.

After the events of this past week, it’s clear that this university needs a complete overhaul of its policies and practices. As idealistic as the second and third demands sound, the coalition is right. Why shouldn’t students have a say in the administration that governs them?

The student body is divided on whether to boycott football games, and perhaps even on whether Loh should stay. But we should not be divided about more student involvement at higher levels of the administration. We live in a democracy, and there’s no reason this university shouldn’t be run like one.

Maybe it won’t be possible to make the Board of Regents an entirely democratically-elected body, but that isn’t the only way to improve our situation. The current Board of Regents is a body of 17 members, all of whom are appointed by the governor. The body serves as oversight not only for the University of Maryland, but also for all public institutions of higher education within the state.

While it is concerning that the governor single-handedly appoints the members of a board that governs all 14 public universities in Maryland, there’s an even bigger issue: The Board of Regents features only one student member, who’s also appointed by the governor. This single student must somehow be the voice for all 14 student bodies, even though they’re not voted in by those students.

I’m willing to bet that the majority of students on this campus have no idea who the student member of the Board of Regents even is. The current representative is a student from the University of Maryland, Eastern Shore, and while some student concerns may overlap across institutions of higher education, there are many situations that are specific to each school. For example, the death of Jordan McNair and the football investigation are specific to this university.

Students of every public university in Maryland need to have a voice on the board. Ideally, the board members would be democratically elected, but regardless, there needs to be adequate representation of each institution on the Board of Regents. This body oversees the academic, administrative and financial operations and creates policy for all Maryland public institutions. How can it govern effectively without substantial input from the students it governs?

Perhaps the board will claim that it deals with issues at an administrative level, and that these matters don’t significantly impact students. But that is untrue — as students of this university, we are the roots of this school. We form the basis for the existence of this university. Without us, there would be no one for the university administration, and therefore the Board of Regents, to govern. The Fire the Liars demonstrators are right: We deserve a say in who makes up this critical governing body.