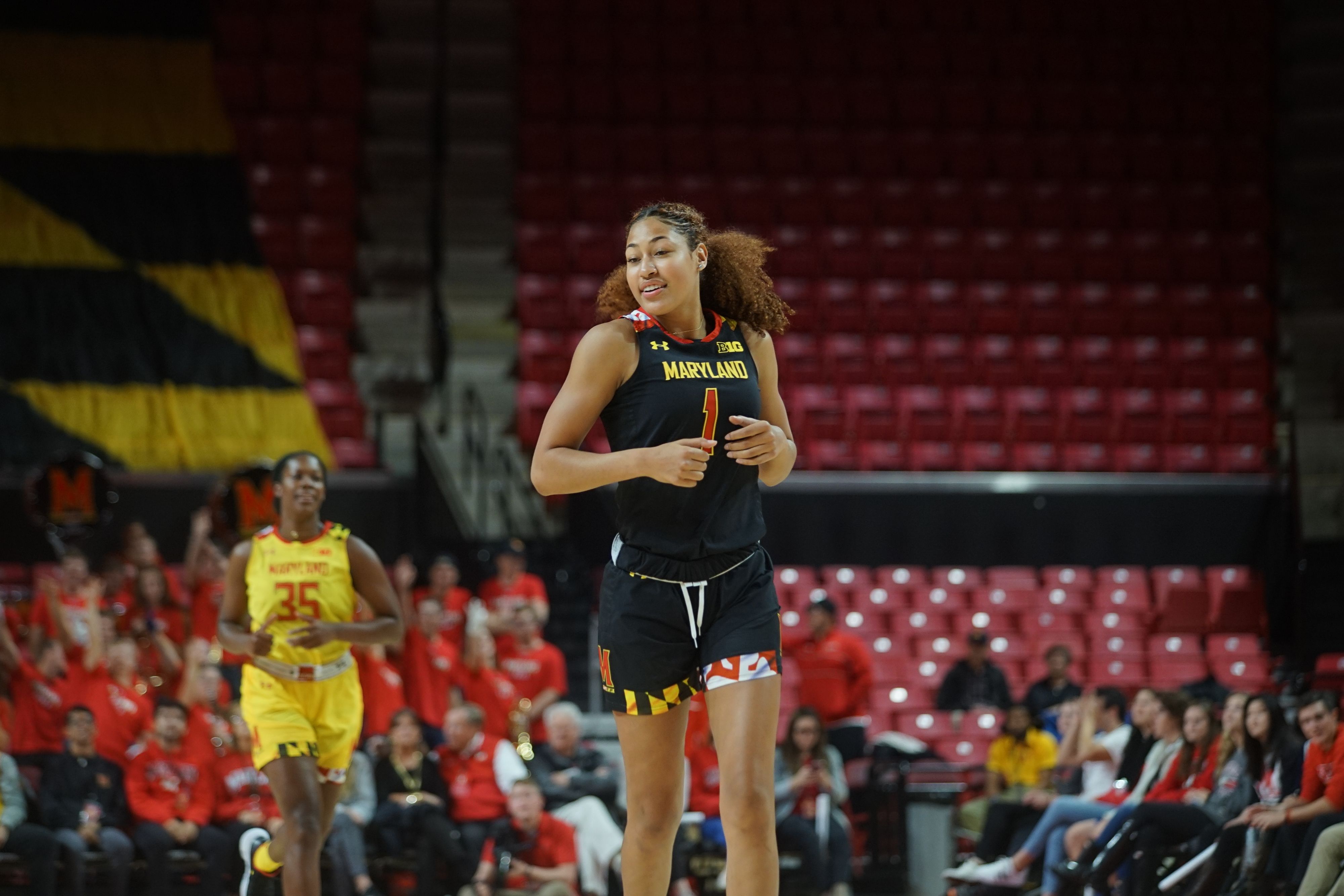 Forward Shakira Austin jogs down the court during a scrimmage at Maryland Madness at Xfinity Center on Oct. 26, 2018. (Corey Hart/The Diamondback)

Minutes earlier, Frese had scolded her team for failing to pick up a Bears guard in transition, which gave a glimpse of what the coach meant when she said at last week’s Media Day the Terps’ defense was her squad’s weakest unit.

Then, after Maryland’s early-game defensive adjustment held Kutztown to just 26 percent shooting from the field in the first half, a third-quarter defensive lapse — in which the Bears were outscored 23-22 — allowed the Division II side to hang with the Terps much longer than expected.

Maryland eventually rebounded with a strong fourth quarter to win 90-63 in its first live action of the year, but the Terps still have room for improvement before their season opener against Coppin State on Nov. 9.

“We showed we have a lot of work to do [defensively],” Frese said. “And I think [Kutztown] did a tremendous job exposing that area for us. It’ll be an area we have to work extremely hard at in practice.”

Arguably the biggest question mark for the Terps at this point is how well the talented newcomers will mesh with the team’s returning four starters.

It wasn’t an ideal start.

Guard Kaila Charles won the opening tip-off, but the Terps threw the ensuing feed out of bounds after miscommunication on the outlet pass. And on Maryland’s next possession, forward Brianna Fraser shuffled her feet trying to score over a defender for another turnover.

The Terps had four turnovers in the first five minutes and finished the first half with nine giveaways. But they settled down to turn it over just five times in the second half.

Many of the early turnovers came in the post. The Terps failed on a few entry passes into the paint, and, when the passes were successful, Kutztown consistently doubled down low to deal with Maryland’s superior height, causing a few miscues.

After the first quarter, the Terps’ forwards did well to split the double-teams and finish or kick passes out wide, allowing the team’s shooters to go 7-for-12 from deep during the next three periods.

Guard Taylor Mikesell was the only freshman to start from Maryland’s highly regarded recruiting class, but guard Sara Vujacic and forward Shakira Austin also made a major impact.

Austin dominated down low. She earned a double-double on 15 points and 11 rebounds, but the biggest takeaway was her aggressiveness in the lane. She had three turnovers, but did well to position herself deep in the paint, which limited the effectiveness of the Bears’ double- and triple-teams.

Mikesell and Vujacic provided an outside dynamic that was mostly absent from the team a season ago. The pair combined to go 7-for-12 from distance, accounting for all of Maryland’s made 3-pointers during the game.

With guard Blair Watson the only returning player who attempted more than 100 3-point shots in 2017-18, Mikesell and Vujacic will have a major role in spacing the floor. And with Austin down low, the inside-outside game should be lethal.

Blair Watson is back

When Watson checked in during the fifth minute, the junior smiled as she received a standing ovation from the crowd and her teammates. While the first regular season game isn’t for a couple more weeks, it was Watson’s first appearance since tearing her right ACL in January.

Frese cleared Watson for action during the team’s Media Day, but it was unclear how much she’d play at the beginning of the year. And even after Watson’s 1-for-5 shooting in 14 minutes Sunday, it remains to be seen exactly when Watson will be ready for a full workload.

And given Maryland’s fourth game of the year is against perennial title contender South Carolina on Nov. 18, the sooner Watson can look like herself, the better.