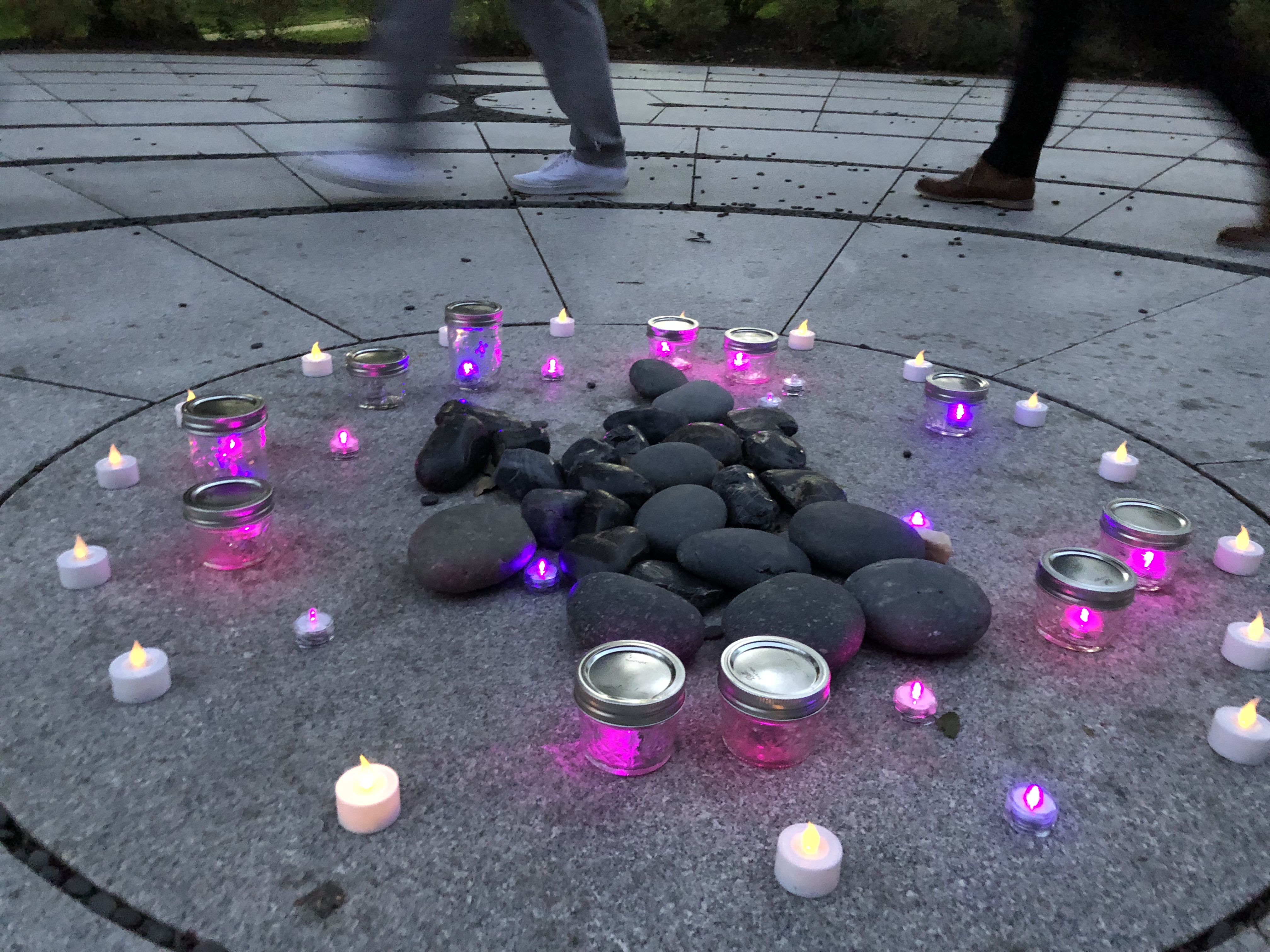 University of Maryland students laid purple lights at the center of the Memorial Chapel Labyrinth on Oct. 24, 2018 to raise awareness for Domestic Violence Awareness Month. (Iris Vukmanovic/For The Diamondback)

University of Maryland students held bright purple lights, a symbol of the fight against domestic violence, as they walked through the Memorial Chapel garden’s stone labyrinth Wednesday.

The ceremony was a part of Purple Light Night, an annual event hosted by this university’s CARE To Stop Violence office, which provides resources to victims of domestic and sexual abuse on campus.

“A lot of people when they hear the word ‘domestic violence’ they have thoughts in their heads about what that means,” said Cottone. “People have to be married, or living together, but we know that on campus that’s really not super common.”

Cottone said abusive behaviors can occur with people who are in more casual relationships or hooking up. The night is meant to highlight the issue on college campuses, she said. She added she hopes to equip students with the tools for identifying potentially abusive situations and how to prevent them and respond to them.

In the past, Purple Light Night was held inside, but this year Cottone moved it outside to see if she could reach more students.

The event was held in three locations across campus: in front of Stamp Student Union, outside McKeldin Library and in the Memorial Chapel Labyrinth. Each table had activities, such as giant Jenga or writing letters to survivors, geared toward educating students on what different situations of abuse could look like and what they can do to help.

Yazmeen Tembunde, a senior public health science major, said she was surprised to learn that familial pressure can play a factor in deterring someone from leaving an abusive relationship.

“Your parents say, ‘Oh I like him!’ And then that’s family pressure to stay with this guy,” said Tembunde. “I didn’t think of that.”

Adith Thummalapalli, a volunteer for the Help Center’s hotline, said they are trained to spot indicators of relationship violence but sometimes they miss the barriers people might face when looking for support.

“I think issues like this are very rarely talked about in society and it’s just nice to see Terps supporting other Terps,” said Thummalapalli, a junior mechanical engineering major.

Thummalapalli said it’s an issue he’s passionate about, because he knows people who have been victims of relationship abuse.

“I’m just trying to do my part to support other people who might be going through something like that,” Thummalapalli said. “I think it’s very eye-opening and very inspiring, and honestly, stop by for five minutes, you can learn so much.”

“[Relationship violence] is a huge problem on our campus and the more you can spread awareness and spread resources like this the better,” said junior government and politics major Drew Lerner, also a member of Chi Phi.

This year’s Purple Light Night is particularly special because the survivor garden, where a plaque and purple flowers are planted to memorialize victims of domestic violence, was moved from the front of the health center to the front of Stamp, Cottone said.

The garden is now located in front of an endangered species of tree called a paperbark maple, which regularly sheds its bark. Cottone likened the tree to the conversation on domestic violence.