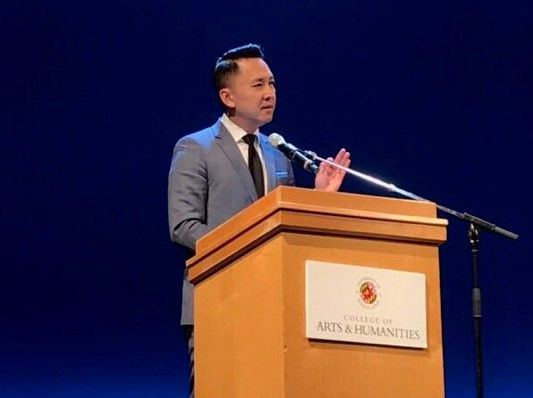 A Pulitzer Prize-winning novelist urged University of Maryland students on Tuesday to seek out and share the stories of refugees and other groups who often feel unwanted in their home country and in the United States.

“We live in an age of narrative scarcity,” said Viet Thanh Nguyen, the best-selling author of The Sympathizer, which won the Pulitzer Prize for Fiction in 2016.

People should have access to a variety of voices, Nguyen said, from refugees and minorities to women and the LGBT community. He calls this “narrative plentitude.”

Nguyen’s new book, The Refugees, was selected as this university’s 2018-19 First Year Book. The book is a collection of short stories from twenty years of documenting the hardships of relocation and explores what it means to belong somewhere.

His visit is part of the “Year of Immigration,” an initiative by this university to increase dialogue about global migration and refugees.

A MacArthur Fellow and professor of English, American Studies and Ethnicity and Comparative Literature at the University of Southern California, Nguyen has been called the “voice to the previously voiceless” by The New York Times, though he claims this is not praise.

“Have you met a Vietnamese person? We’re not voiceless. We talk all the time. We’re not heard,” Nguyen said. “Justice is not about elevating voices for the voiceless. It’s about creating a condition where all voices are heard.”

The lecture comes at a time when immigration has become a significant part of the national conversation. Two migrant caravans from Central America are currently making their way to the U.S., and President Trump has threatened to shutter the border in response.

Earlier this year, following the U.S. Justice Department’s announcement of a “zero tolerance” policy for immigrants crossing the U.S.-Mexico border, several thousand migrant children were separated from their parents. The policy has caused significant national backlash.

Nguyen has experienced family separation first-hand. He and his family, who fled war-torn Vietnam in 1975 when he was 4 years old, were forced to separate so they could leave the refugee camp they were staying in. Nguyen was taken to live with a sponsor — a white family — while his parents and brother were sent somewhere else. Months later, they were reunited.

“I know the feeling of terror from being abandoned. That memory has never gone away,” Nguyen said. “That’s how I know that children at the border are going to be forever marked from being taken away from their parents.”

“Closing the borders is not a solution,” Nguyen said. Instead the United States should be setting an example for the world by taking in refugees and asylum-seekers. “Refugees and undocumented immigrants are going to keep on coming, and if we actually had a sensible policy, we wouldn’t be confronted with the crisis we have today.”

Nguyen describes himself growing up as being “born in Vietnam but made in America.” Never really sure of how to identify himself, Nguyen didn’t claim the term “Asian-American” as his own until he reached college.

Many students in the nearly full auditorium at the Clarice Smith Performing Arts Center could relate to Nguyen’s message. Kak Wong, a physics graduate student from Hong Kong, said that though Nguyen’s experience is different than his, he still connected to the speaker’s story.

“Now that I’m in America, I am transitioning into Asian-American,” Wong said. “I’m still at that junction of crisis where I don’t really know where I’m at.”

James Ozaki, a University of Illinois student living in Washington D.C. this semester for an internship at the Smithsonian, is Japanese-American, and his grandparents were incarcerated during World War II. That helped him connect with what Nguyen was saying.

“This impacts me in the sense that it makes it personal,” he said. “And that continuing narrative throughout history that he mentioned? It’s the same story.”