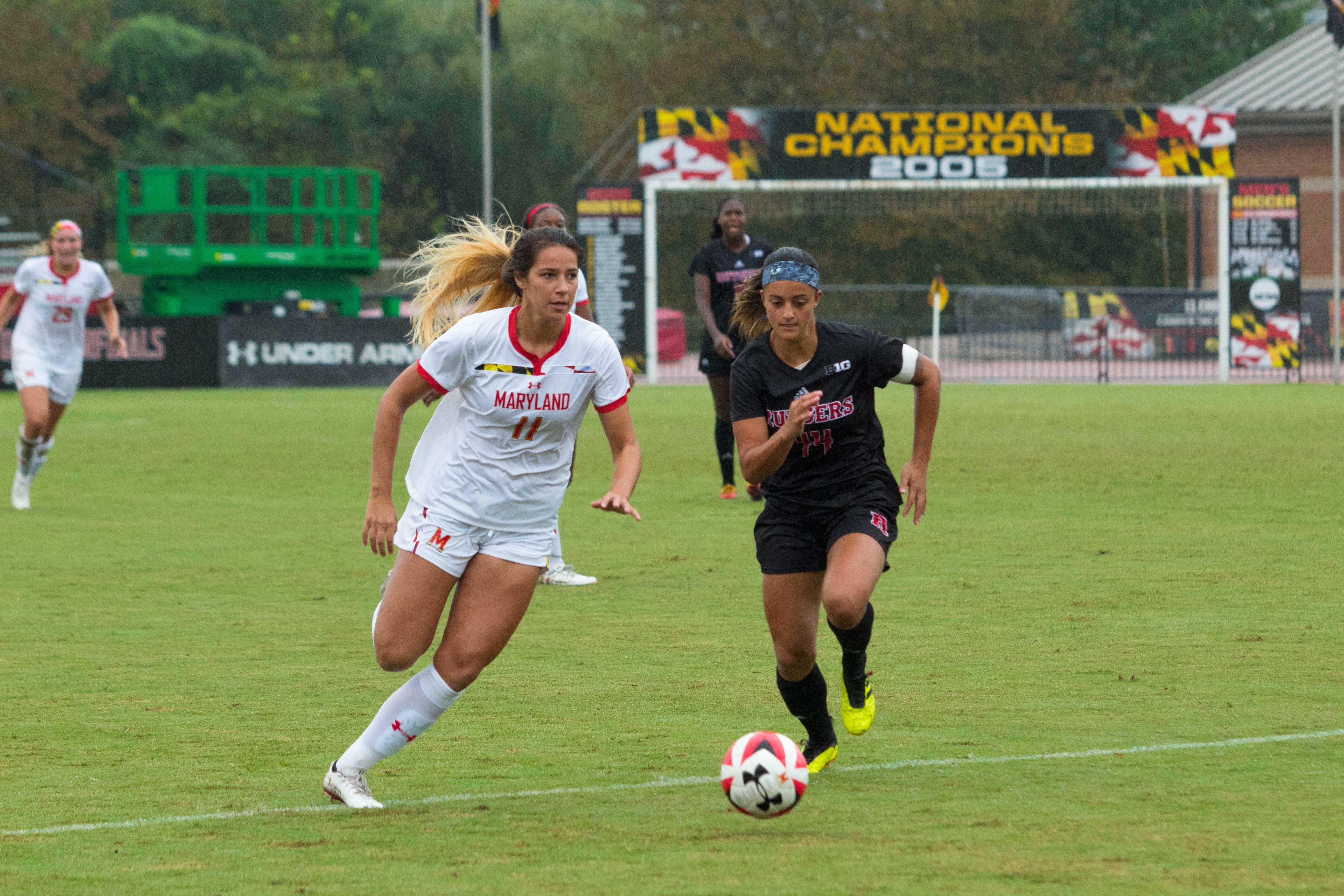 Defender Jenna Burdock races against Scarlet Knights attacker to get the ball before her in Maryland women’s soccer’s 2-1 loss to Rutgers at Ludwig Field on Sept. 23, 2018. (Frances Moyonero/The Diamondback)

With Maryland women’s soccer struggling to generate opportunities in the first half of a scoreless draw against Indiana on Sunday, the Terps once again relied heavily on goalkeeper Rachel Egyed to keep them within reach.

While the redshirt senior was officially honored for her impressive career in net two weeks ago on Senior Day, the match with the Hoosiers was the last time she would suit up as the Terps’ goalkeeper.

Though Maryland’s offense tried to come alive in the second half, Egyed’s final game as a Terp followed the same script as many of her previous 51 did. As her offense struggled to create chances, she was tasked with parrying countless efforts from her opponent. She performed admirably but wasn’t perfect, and the Terps fell, 1-0.

Like many of the goals Egyed allowed this season, she had little hope at stopping the Hoosiers’ 38th-minute score. Indiana forward Chandra Davidson corralled a cross deep in the box, but, sensing she didn’t have a clear path to the goal with defender Kady Badham closely marking her, she laid off a pass back to the top of the box for midfielder Grace Geise.

The sophomore took one quick touch to her right to avoid a sliding midfielder Malikae Dayes, and slotted a skidding shot into the bottom right corner of goal, enough to negate Egyed’s five-save performance.

Despite a slow first half from Maryland, the Terps attack had perhaps its best half of the season in the final 45 minutes.

After an Indiana shot in the 55th minute, Mayland went on a 22-minute string where the offense outshot the Hoosiers 9-0. Of those opportunities, the best chance came on a well-struck laser from midfielder Hope Lewandoski.

The sophomore, running down the left side of the Hoosier defense, crushed an outside strike that would’ve beaten goalkeeper Bethany Kopel, but the attempt clipped the crossbar.

“Going into the locker room, we knew we weren’t performing like we wanted to,” Lewandoski said. “So we said, ‘Look, this is our last 45 minutes. We’ve got to give all we’ve got.’ So I think we just put more energy into that second half.”

And prior to the uncharacteristically potent second half, the Terps had nearly found a late-period equalizer in the first half.

Midfielder Loren Sefcik floated a through ball over the top of Indiana’s backline, and the pass landed at the feet of forward Emily McNesby deep in the box between three Hoosier defenders. With nobody between her and the goalkeeper, the freshman lifted a shot around Kopel, but it rolled just wide left of the frame.

Other than the near-miss from McNesby, the Terps failed to earn many meaningful opportunities in the first half. Maryland didn’t earn its first shot until the 15-minute mark, and the Hoosiers held a 10-6 shot advantage prior to halftime.

Maryland rebounded for a 10-7 shot advantage in the second half, but, after failing to find a goal, fell 1-0 to the Hoosiers. In the final game of the season, the Terps were shut out for the 10th time.

“Even if we were out of the [Big Ten] tournament, we still had to play for ourselves, for our pride and for our seniors,” midfielder Darby Moore said. “We’re here to turn the ship around, as our coach likes to say, and we’re going to rebuild the program with everything we can get.”