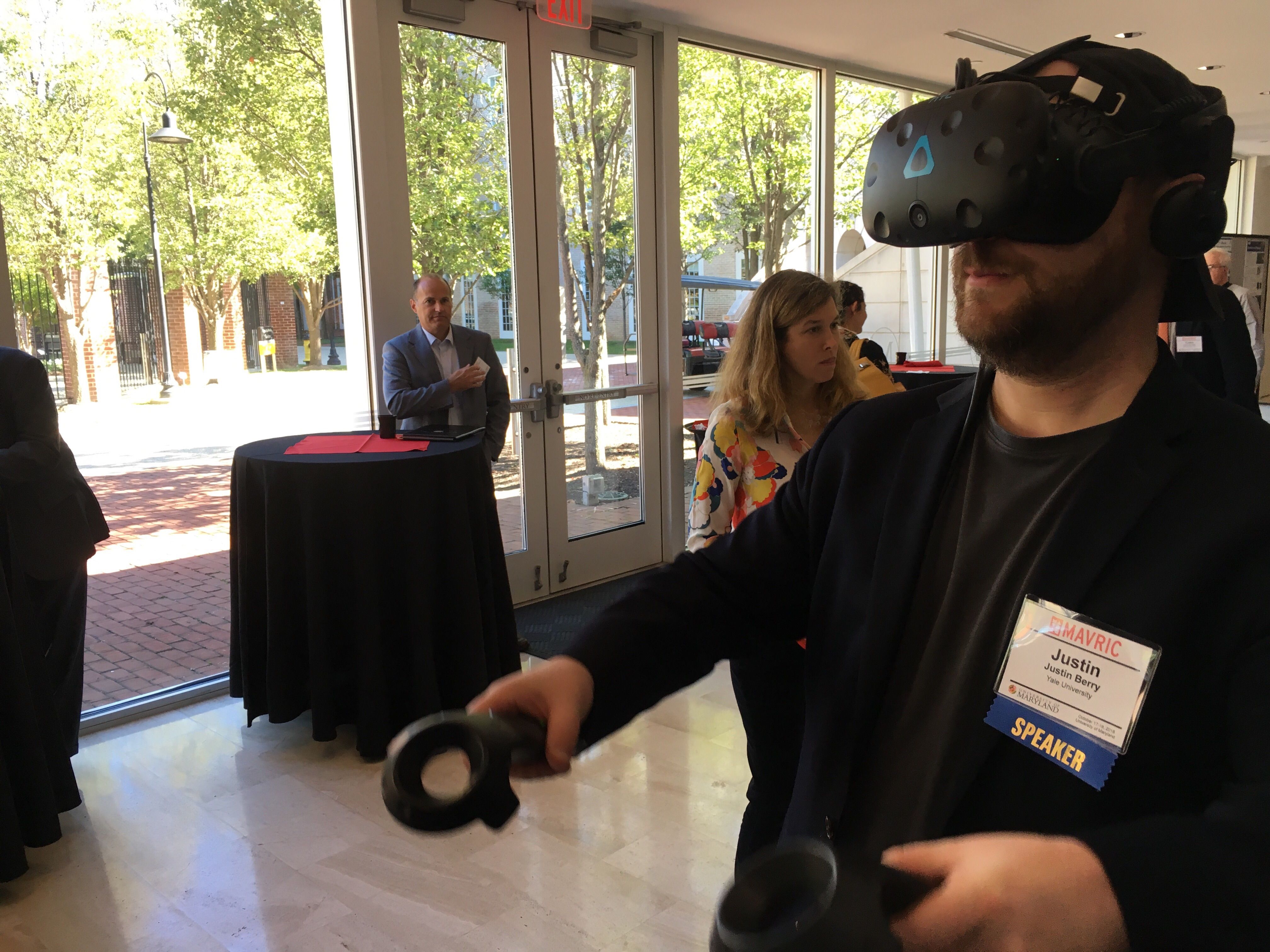 Justin Berry of Yale University tests out a virtual reality headset at the MAVRIC technology conference at the University of Maryland on Thursday Oct. 18, 2018. (Photo by Garrett Mogge/For The Diamondback)

A University of Maryland student and a recent graduate were among a slew of researchers and entrepreneurs to present their innovations in virtual and augmented reality at a technology conference on the campus this week.

The pair showed off their solutions to what they said were common issues in VR gaming — like poor quality, lack of story depth and simulation sickness — at the inaugural Mixed/Augmented/Virtual Reality Innovation Conference at Riggs Alumni Center.

“We consider that a really big problem with the industry right now,” he said. “Some games still make players feel sick.”

The two-day conference was hosted by this university’s Mixed/Augmented/Virtual Reality Innovation Center, or MAVRIC. The center was founded in 2017 by Lucien Parsons to explore these new technologies, which he said give “superpowers” to ordinary people.

“Technology never succeeds unless it makes it easier or cheaper for somebody to do the things they already do,” he said. “If I can put on a pair of glasses and look at a wall full of boxes and know what’s in every single one of those boxes without opening it, that’s a pretty effective use of my time.”

Stetsyuk and Sorokin founded MPLEX VR during their time at this university. Around the same time, the two started the virtual reality club on campus.

Though the company deals specifically with virtual reality in entertainment, its innovations can be applied to other uses of VR, such as military training, Stetsyuk said.

The technology was first used by the military, which developed physical flight simulators in the 1920s to create an immersive training tool that didn’t risk pilots’ safety, Parsons said.

The technology is still used in the military, Parsons said, but MAVRIC is at the forefront of applying it to other fields, such as medical training research, journalism and autism education.

Students and researchers have recently pioneered the use of virtual “empathy tours” to help educators, parents, friends and even police officers understand how the world is perceived through the eyes of a person with a disease like autism, Parsons said.

“It’s the ability to stand in someone else’s shoes for what may be the first time in history,” he said.

Taylor Bartlow, a junior astronomy major who was interning for MAVRIC and assisting at the event, said undiscovered applications of these new technologies are why she got involved with VR.

New innovations in VR are not only visual, said Conor Mulvey, who attended MAVRIC with his company VisiSonics, which combines virtual and augmented reality with audio technology.

Mulvey demonstrated ways to add directionality to sounds in VR and AR, using 360 microphones to make noises seem like they are coming from above, below and all around a person.

The microphones “can fool your brain into thinking there is a fake sound in your environment,” Mulvey said.

Despite the historic applications of virtual, augmented and mixed reality technology, the majority of their future uses are yet to be discovered, Parsons said.

“Where we go from here is wide open,” he said. “UMD is working to be at the forefront of that.”