We should celebrate Testudo’s female identity 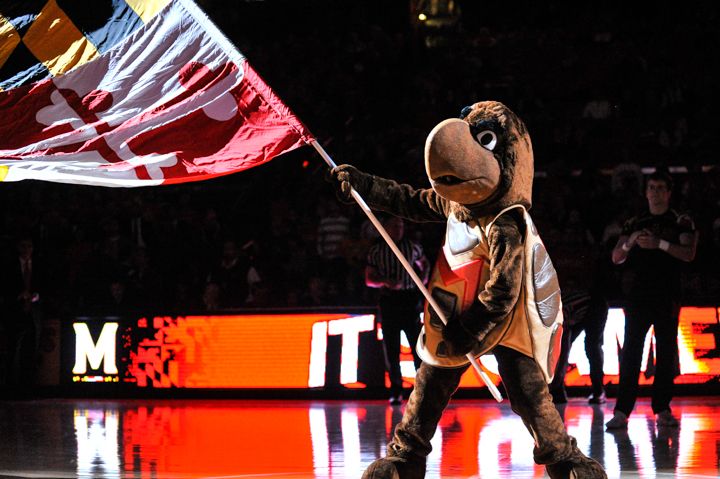 Testudo brandishes the Maryland flag during introductions prior to the Terps match up against the Miami Hurricanes on Jan 29, 2014 at Comcast Center.

The libraries at University of Maryland are celebrating the 200th year of the publication of Mary Shelley’s Frankenstein. It is also the 226th year since the publication of A Vindication of the Rights of Woman by Mary’s mother, Mary Wollstonecraft. Vindicating women continues. The news media is awash with reports of the spike in the number of women seeking political office, films such as RBG, The Wife, #MeToo and much more. Women are not only breaking male strongholds — they’re calling men to task for all the detritus they’ve left in their wake.

The thing is, giving women their due is way overdue. The smaller size of Testudo’s tail, as well as Testudo’s more rounded carapace, support the conclusion that our terrapin is female; the bronze statues in places such as McKeldin Library, Stamp Student Union, and the football field are female, not male. So why have men confiscated and monopolized her identity? For more than eight decades, nearly all university images that identify the Testudo’s sex depict her as male. The entry for Testudo on the university libraries website “MAC to Millennium” says — by way of using exclusive male pronouns — that Testudo is male. The SGA has named their stuffed animal version of our female Testudo “Ralph.” What’s the deal with that?

Additionally, male athletic teams — mainly football — have made the most use of our mascot and have taken the lead in detracting from her primary role of representing the spirit and fun of campus life and athletic games. Now, she is portrayed as what CBS Sports described in 2014 as a “monstrous” Testudo that “will live in your nightmares.” But athletic competitions are not won by scare tactics; they are won with talent, skill, intelligence, coaching, training, preparation, intense motivation and maybe by encouraging the competition to underestimate us. Our women’s teams have won three times as many NCAA championships as our men’s teams. Yet the Maryland Victory Song only refers to boys. What’s the deal with that?

And another thing: Testudo is a terrapin. Specifically, a diamondback terrapin, species name Malaclemys terrapin. Referring to Testudo as a turtle is too vague, too general, too all encompassing; there are over 300 species of turtles. The size of turtles varies a lot. Some are as small as a few inches. Other turtles are as large as several feet. Moreover, Terp is an abbreviation for terrapin, not for turtle. If we were to use turtle, its abbreviation would be turt — at least until the competition finds out and translates it to turd. When we meet alumni, we don’t identify ourselves as turtles — we identify ourselves as terrapins. Our battle cry should not be “Fear the turtle”; it should be “Fear the Terrapin.”

Moreover, as far as we know there are a handful of other colleges with a female mascot, with Claremont McKenna College, Harvey Mudd College and Scripps College sharing one female mascot, Athena. Why are so few mascots female? What does that say to young girls? No girls allowed? Why don’t we let people know that our mascot is female? Why do we allow her to be masqueraded as a male?

Testudo is not simply a mascot, she is our totem (a word derived from the Algonquian language just as the word terrapin is). She is our sacred animal that symbolizes who we are. She is a visual sense of our identity and belonging. She brings us together and imbues us with spirit and energy that accounts for our success as we go through life. She is our guardian spirit guiding us throughout our lifetime. She is the core of our being, our essence, our quiddity. She is what makes us us. Terrapin is who we are. Let us undo what is overdue and recognize that Testudo is female.

John Pease is an associate professor emeritus in the sociology department. He can be reached at pease@umd.edu.

Devorah Stavisky is a senior sociology major. She can be reached at mandy2160@gmail.com.