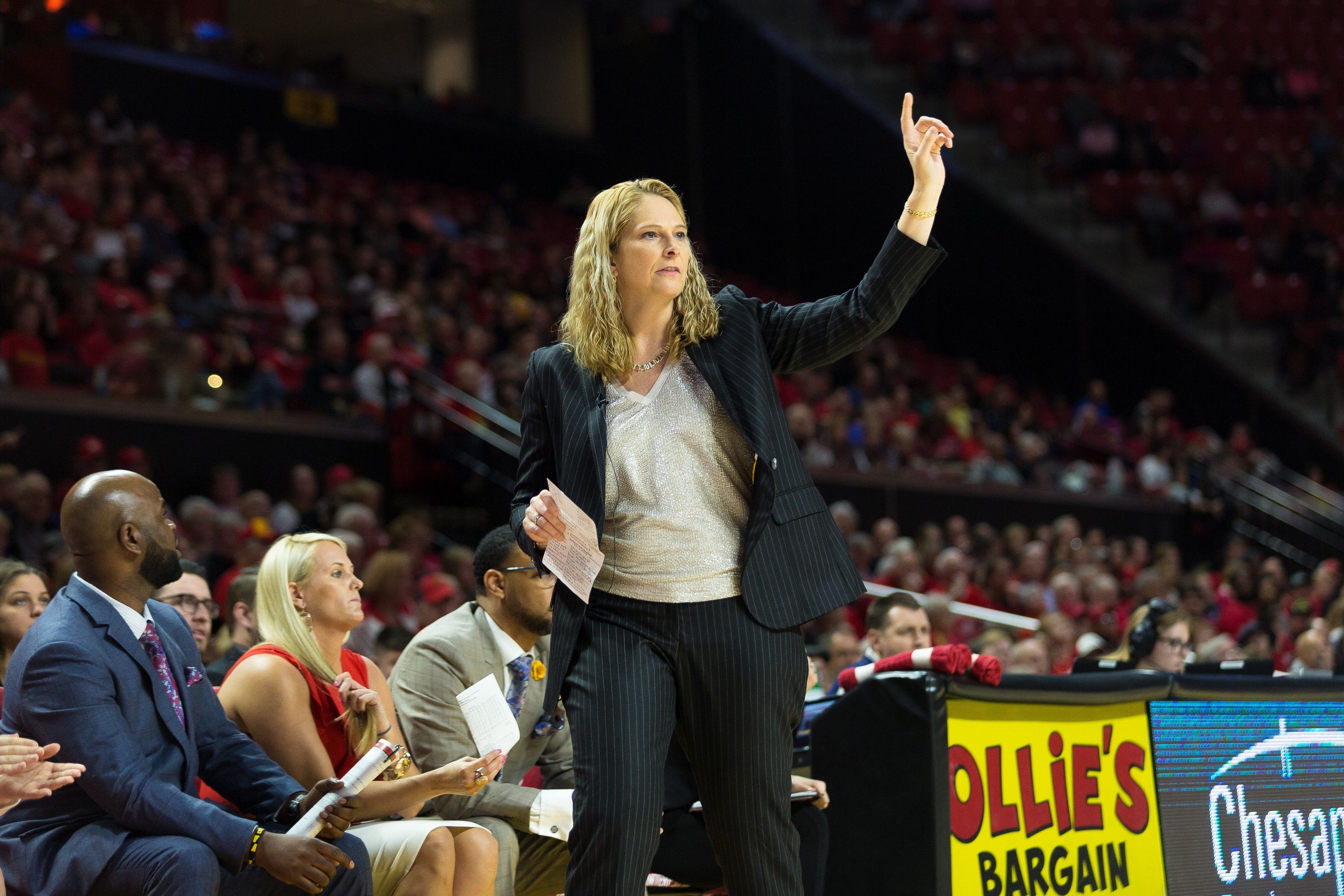 Head coach Brenda Frese calls out a play from the sideline during Maryland’s 77-75 win against Nebraska on Feb. 25, 2018 at Xfinity Center. (Marquise McKine/The Diamondback)

Even after failing to reach 30 wins for the first time since 2013-14 and suffering a double-digit loss to NC State in the second round of the NCAA tournament, Maryland women’s basketball coach Brenda Frese said she was proud of how her squad persevered through adversity the 2017-18 campaign.

Before that season even began, four players — including National Freshman of the Year Destiny Slocum — transferred from the program. With All-Americans Shatori Walker-Kimbrough and Brionna Jones having graduated, the tumultuous offseason dampened expectations significantly.

So at Thursday’s media day, even with the Terps entering a season returning four starters and welcoming the No. 5-ranked recruiting class, Frese said she isn’t taking anything for granted.

“I don’t know if a coach is ever comfortable going into a season,” Frese said. “We always see our holes and our weaknesses and hope that nobody else sees them.”

It’s difficult to find the flaws on this year’s roster.

Combine that with a recruiting class highlighted by McDonald’s All-American forward Shakira Austin and guards Taylor Mikesell and Sara Vujacic, and the team can count on having a balance of size and shooting ability that was absent a season ago.

“The ability to shoot the three right now is very high for us,” Frese said. “When you look at Taylor [Mikesell], you look at Sarah Vujacic, they’re able to expand it. Then, when you look at our post game right now … just having that inside-outside combination is going to be key.”

The one piece missing for Maryland right now is Watson, who spent the offseason recovering from a torn right ACL suffered during a practice in early January. Frese said Watson had been fully cleared to return to basketball activities Wednesday.

Before going down last season, Watson was a breakout star for the Terps. The Nutley, New Jersey, native ranked second on the team with 13.8 points per game. After she went down, Maryland finished the season 11-6.

But with the plethora of weapons at Maryland’s disposal going into 2018, Frese has the liberty to not hurry the talented guard back to the lineup.

“I find with ACLs it takes time, both mentally and physically,” Frese said. “We will ease her back in to the point where we can get her 100 percent healthy. Obviously Blair is a big x-factor for us.”

With plenty of talent, it seems the key to Maryland’s season will be how quickly the group coalesces. The Terps will be challenged with a Nov. 18 matchup against 2017 national champions South Carolina, but Frese’s early assessment of the team dynamic is promising.

“The thing that separates this team right now is their bond and their chemistry, which is stronger than any team I have seen in a long time,” Frese said. “The energy and the personality of this team is going to be a lot of fun to watch this season.”