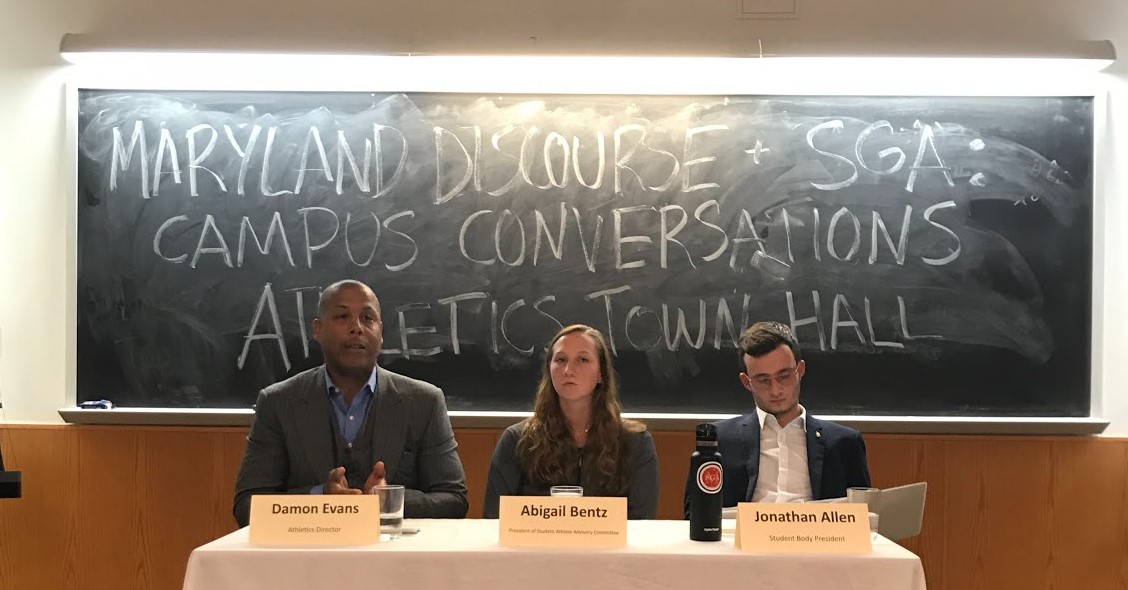 University of Maryland students raised questions at a town hall meeting on Thursday about what steps the administration has taken to improve transparency and communication in the wake of Maryland football player Jordan McNair’s death.

Maryland athletic director Damon Evans, Student-Athlete Advisory Committee president Abigail Bentz and Student Government Association president Jonathan Allen fielded questions about McNair’s death and the investigations that followed from the group of about 60 attendees as part of Campus Conversations, an initiative to encourage dialogue about issues important to university students, hosted by the SGA and Maryland Discourse.

McNair died two weeks after suffering heatstroke at a team workout on May 29. At an Aug. 14 press conference, university President Wallace Loh said the university accepted “legal and moral” responsibility for McNair’s death.

Allen criticized football coach DJ Durkin, who was placed on administrative leave after ESPN published a report detailing a “toxic culture” under the coach and his staff. The report led to an investigation now being overseen by the University System of Maryland Board of Regents, which has yet to be completed.

“If, somehow, coach Durkin is reinstated, I think that would be indicative of … instances where athletics department have valued their bottom line more than they valued their student-athletes,” Allen said. “If [players] say that they don’t feel comfortable under a coach that had a death [on] his watch, then that should be the only thing that matters.”

Allen was also critical of the nearly two-month gap between McNair’s death and the press conference and called for more transparency from the administration moving forward.

He suggested publishing information immediately for students to read, rather than waiting to package it into a press release or a Maryland Today article.

“We as a university are often reactive instead of proactive,” Allen said.

When asked what steps the university is taking to protect student-athletes, Evans said that an online tool has been created for student-athletes to report concerns anonymously. This will allow administrators to receive information immediately and quickly investigate, as opposed to hearing about problems in exit interviews, he said.

Durkin’s fate also came up in questions to Evans. He said it’ll be decided once the investigation into the team culture is completed.

“I’m trying to do what is in the best interest of our student-athletes, of our program, and of our university as a whole and I’m committed to doing that,” he said. “We’re going to do what’s appropriate.”

The university hired Dr. Rod Walters, a sports medicine consultant, to conduct an external investigation into McNair’s death. Last week, Walters’ firm released its findings, which laid out a timeline of the day McNair’s collapsed and detailed the inadequate care given to McNair by athletic trainers.

Evans reiterated that the team’s athletic trainers failed to promptly diagnose and treat McNair for heatstroke after he collapsed. Research shows that heatstroke has a 100 percent survival rate when treated properly with cold water immersion.

“We did not have some of the best [medical] practices,” Evans said. “Jordan did not receive proper medical care.”

Bélan Chimamanka’a, a senior computer science and linguistics major, said he was glad students challenged Evans and held him accountable.

“I will say that I don’t think the concerns of the students were fully addressed,” said Chimamanka’a, who is a member of Maryland Discourse. “There was a reliance on sort of the safe response, [but] to be fair … there was really not much he could say to make the situation better.”

Andrew String, a sophomore government and politics major and SGA alumni relations director, said he was surprised by how transparent the athletic department has been recently.

“I’m happy that they admit the actions that have been happening in the past few months about the environment being toxic,” String said. “I’m happy they are addressing the problems now and that they’re being transparent. … I think moving forward, we’re going to have a better relationship with them.”