Cities should offer compost services to reduce the impact of America’s waste problem. 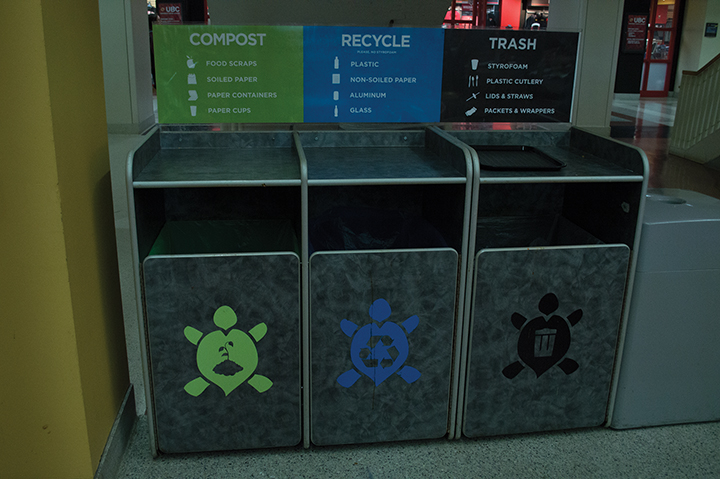 Located in Stamp are bins that sort compost, recyclables,and trash.

The United States has a waste problem. In 2015, we sent 262.4 million tons of garbage to the landfill and the average 180-pound American generates their weight in waste every 41 days. This is clearly unsustainable.

The aggregate and per capita generation of municipal solid waste has steadily increased since the 1960s. Food waste is an especially egregious issue, as confusion surrounding expiration dates, poor planning and overbuying contributes to a 30-40 percent waste of total food supply.

When food scraps are thrown into the garbage and eventually dumped in a landfill, they decompose much more slowly than they would if they were composted. The massive waste piles create an anaerobic environment, which not only prolongs the decomposition rate, but also releases methane, one of the more potent greenhouse gases. According to the Environmental Protection Agency, in 2016, landfills were the third largest anthropogenic emitter of methane in the U.S..

When composted properly, food scraps break down faster, producing a nutrient rich fertilizer that can be used in place of its artificial counterpart. Artificial fertilizer, which is both financially and environmentally costly, leeches into waterways and causes algal blooms that lead to oxygen dead zones and fish kills.

While composting can be done residentially, not everyone has the yard space or leisure time to ensure proper decomposition. Given the finite nature of our planet and the decreasing space for our enormous mounds of trash, municipal compost pick up needs to be a part of our country’s infrastructure.

In some parts of the country, it already is. San Francisco, Seattle and Swift County, Minnesota all have curbside compost pickup programs alongside recycling and trash. San Francisco’s compost program, in place since 2004, has reduced landfill-bound waste by 24 percent.

The greater Washington, D.C., area isn’t so far behind either. Montgomery County offers free compost bins at pickup points throughout the county. The D.C. government is now partnering with Compost Cab, a private compost removal service, to offer compost drop-off points at farmers’ markets around the district. And Takoma Park offers curbside pickup and will deliver natural fertilizer back to participants in the program.

Even the University of Maryland offers compost bins in select locations on campus, although they are conspicuously absent in on-campus apartment buildings, where many food scraps are generated.

There are many easy ways to reduce one’s environmental impact, but modern Americans are busy, and when it comes to sustainability, many of us are just downright lazy. Adopting widespread curbside pickup for compostables will significantly reduce the amount of waste going to landfills, reduce agricultural nutrient runoff and, ultimately, be a big step forward in our country’s journey toward sustainability.