Review: ‘The Guernsey Literary and Potato Peel Pie Society’ has a unique title, but not much else 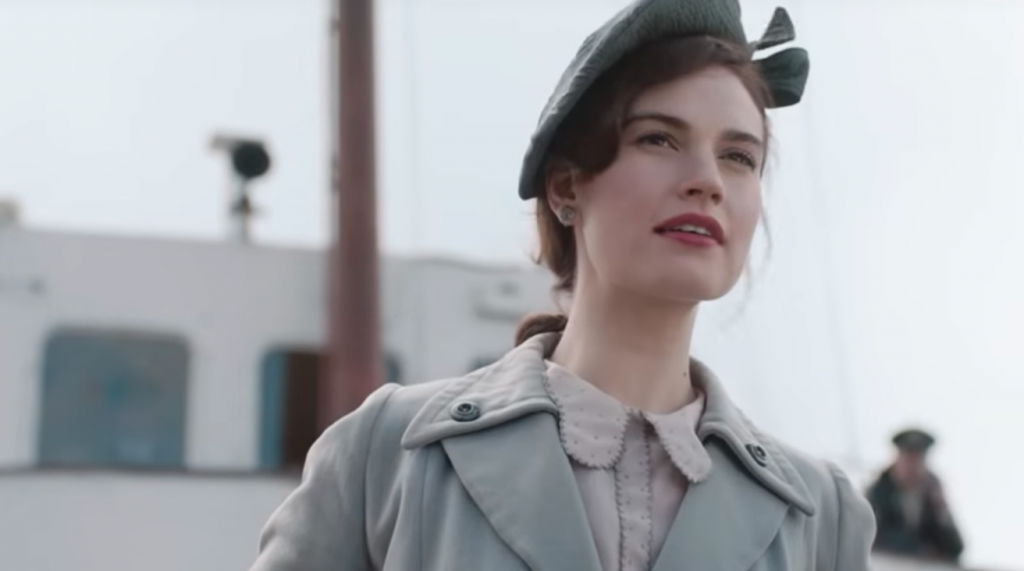 For a movie with such a unique title, The Guernsey Literary and Potato Peel Pie Society is a bit lacking in originality.

Based on the 2008 novel of the same name, the film captures the lives of British citizens after the trauma incurred by World War II. This film chooses to focus on the natives of Guernsey, a small British island occupied by the Nazis during the war.

Guernsey’s residents survived the war with their humanity intact only through the accidental formation of a rather quirky book club, after which the film is named.

Juliet Ashton (Lily James) is a successful and beautiful young author from London who discovers the society through strong but silent member Dawsey Adams (Michiel Huisman). Juliet and Dawsey correspond through letters reminding Juliet that her true love — books and knowledge — is shared by other “real” people, not just elites like her fiancé, Mark Reynolds (Glen Powell).

The movie shows those who were allowed to live under occupation, and avoids depicting those who were shipped off and killed. These stories and experiences are real and important. But although we see some concentration camp victims, the words “Jew” or “Jewish” manage to be completely avoided. The word “slave” is used instead.

Instead of mentioning any prejudice against the many targeted groups of the Holocaust, the film asks us to question whether we should allow ourselves to be prejudiced against Germans and Nazis. This viewpoint — emphasized in the hateful attitudes toward a four-year-old girl, Kit, whose father was a Nazi — is a bit off-putting; the film implies that some Nazis, such as Kit’s father, are OK, without ever really telling us why.

The film categorizes the hate Juliet and Amelia Maugery (Penelope Wilton) feel toward the Nazis as a type of prejudice in itself. Amelia grieves her choice to demonize her foster daughter’s relationship with a Nazi, blaming herself for not supporting their relationship before they both perished. Most of the characters don’t have a huge struggle to overcome their prejudice against the Nazis, maybe because the only characters in this film are white Christians.

The only time a “slave” actually has their face on camera is during a flashback when Dawsey begs his friend not to help a young, dying boy for fear of retribution by the Nazis. As he regales Juliet with this tale, his only regret is allowing his friend to help the (presumably) Jewish boy because the act leads to her arrest and murder. He briefly mentions that the boy was also murdered.

Despite his love-hate relationship with Nazis and his half-hearted sympathy to the “slaves” of the Holocaust, we’re meant to cheer for Dawsey. He loves books (unlike stupid, rich, American fiancé Mark) and is raising the child of his aforementioned deceased friend as his own.

While some themes in the film are disconcerting, it’s not irredeemable. The “grandmother”-type Amelia is put through so much pain, and no matter her rough exterior, we feel for her, for all the war has put her through. As she witnesses lives torn apart around her, Amelia grieves.

“I’m older than time,” she wails, “and I understand nothing!”

It’s heartbreaking for this odd little family, and especially for this little girl who has been orphaned so young. The pain of those who survived the war and yet lost everything is laid in front of the audience as a tragedy.

But most of the movie makes use of trite romantic clichés and minimal acting skills. Most of the pain is depicted as melodrama and flashback, and even then we see very little substance within most of our characters, including our lovers Juliet and Dawsey.

Movies about the English Blitz exist because British people needed to purge their pain. They might not speak with nuance about the Holocaust, because it was not the central part of WWII to them. The residents of Guernsey care about life on Guernsey because it affects them directly.

I care about portrayals of the Jewish experience because I am Jewish. We can’t all view a sympathetic Nazi character through the same lens, because we center stories about WWII on our own experiences, which are based on what we care about most.

Although I enjoy this movie as a fan of period dramas and romances, it can’t help but leave me uneasy. I can never imagine myself as one of the Europeans living under occupation, barely glimpsing the pain the “slaves” go through, angry that I have no freedom. I can only view myself as one of the slaves.