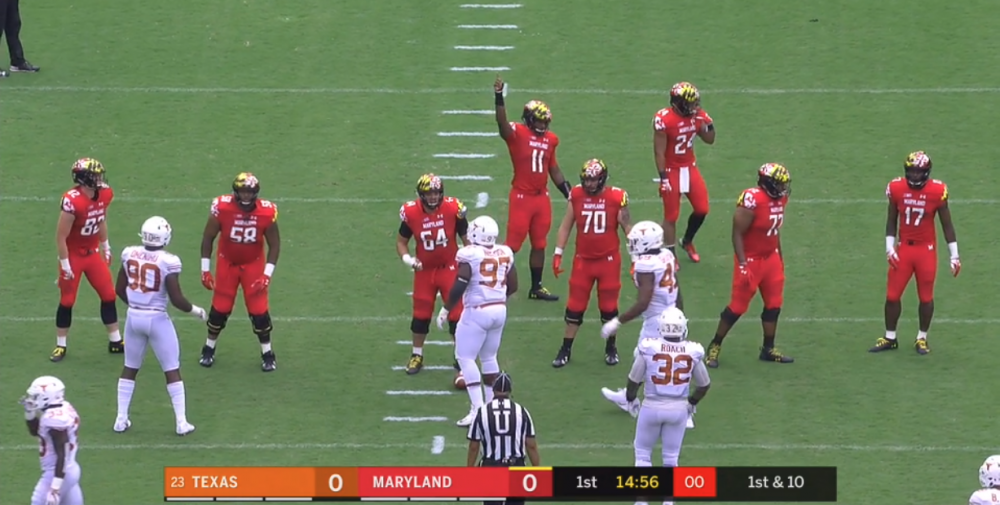 The death of Jordan McNair has hung over the Maryland football team this year, and the team plans to honor him all season. In Saturday’s season opener, the Terps showed how they’re maintaining McNair’s legacy.

Offensive lineman Ellis McKennie ran out of the tunnel holding a No. 79 flag, and Maryland’s captains brought McNair’s No. 79 jersey out to midfield for the coin toss. After receiving the opening kickoff, the offense came out with 10 men on the field, with one absent to honor McNair.

On the Terps’ first play of the game, they took a delay of game penalty, with 10 men on the field, to honor Jordan McNair. Texas declined. pic.twitter.com/LFvqz21dTd

Kasim Hill let the play clock hit 0, but the Longhorns had agreed before the game to decline the penalty, so the Terps began their next play on 1st-and-10.

As the game ended in the fourth quarter, McKennie brought the flag back onto the field, showing everyone in the stadium that Maryland was still playing for McNair.

As the final seconds tick away on their win over Texas, the Terps take the flag with Jordan McNair’s No. 79 onto the field. pic.twitter.com/jvpyGAnLkc

In his postgame press conference, interim head coach Matt Canada thanked Texas coach Tom Herman for turning down the penalty, and said it was the players’ idea to come out with 10 players.

“Everything we’ve done to honor Jordan is from our players,” he said. “They’re the ones who decided it, talked about it, and that was special.”

More than two months after McNair’s death, the athletic department and the school continue to deal with the fallout from it. Meanwhile, the players are doing the only thing they can — keeping his memory alive.