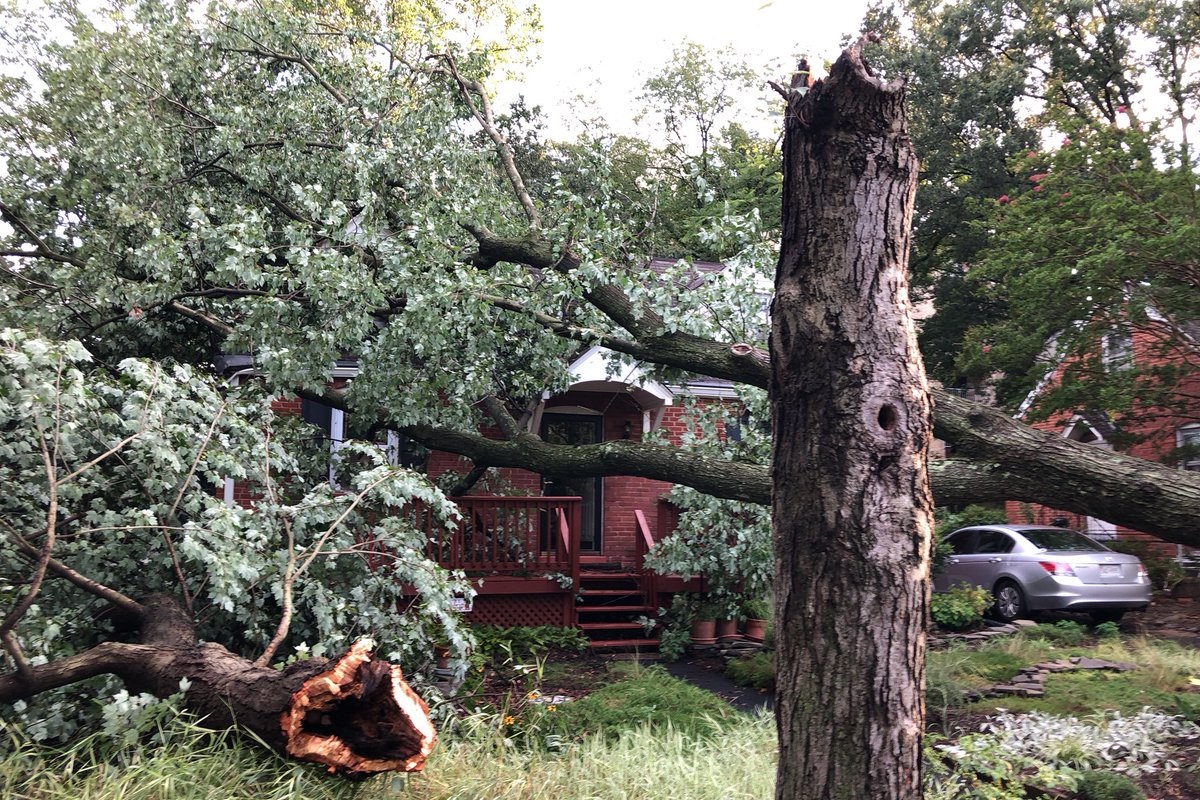 The house on the 5000 block of Hollywood Road sustained significant damage from a tree falling into the second floor of the house. The corner of the structure was completely torn off, exposing the room inside, photos still hanging on the walls.

More storm damage: The second floor of a house on Hollywood was ripped open by a massive tree falling. An upstairs wall appears to be completely demolished by the trunk. pic.twitter.com/4TZeAGGg3m

A resident was in a room downstairs when the tree smashed into the house, said Tom Davis, a next-door neighbor. The man was unharmed, Davis said.

“He was home underneath where the impact was,” Davis said. “Of course, the impact didn’t get to him, but it squashed the room above him. It’s bad enough, but it could have been so much worse.”

Davis said he didn’t hear the tree fall because the wind was so loud. He said he could barely see 10 feet out his window while the storm was raging.

In the aftermath, College Park District 1 Councilman Fazlul Kabir, whose district covers Hollywood Road, stopped by to check on his constituents, Davis said. Kabir could not be reached for comment.

On the 4900 block of Blackfoot Road, near the intersection of Rhode Island Avenue and University Boulevard, three large trees were pushed over by the high winds. Two of them were ripped out by their roots.

Result of a severe storm that just tore through College Park: Three large maple trees — two ripped out by their roots — on Blackfoot Rd near the intersection of Rhode Island Ave and 193. pic.twitter.com/E6agBbox3U

One tree landed on the front entrance of a house owned by Dennis Hartnett. He and his wife were in their bedroom when the storm started but were unharmed, Hartnett said, adding that the College Park Fire Department arrived soon after to cut away branches so he could access the front of his house.

Hartnett remained in high spirits despite the difficult circumstances.

“What are you gonna do?” he said. “Just smile and make the right phone calls.”

Power was restored to the affected areas as of Monday evening, said College Park Mayor Patrick Wojahn, adding that his staff would be out in the city Tuesday to help the ongoing cleanup effort.

“It will just be a matter of getting out the chainsaws and cleaning up the roads and sidewalks,” Wojahn said.

Displaced residents are being assisted by the Prince George’s County Office of Emergency Management and the Red Cross, and no injuries have been reported, Brady tweeted.

Wojahn commended the first responders and emergency crews for responding quickly after the storm hit.

“The response was great, all things consider,” Wojahn said. “A lot of trees and a lot of damage that needed to be taken care of very quickly. From what I can tell, thus far everything went smoothly.”

As the sun began to set, clean up crews arrived on Hollywood Road to start cleaning up the damage.

“You ever hear the expression, ‘If I was standing in this storm I would have drowned?'” Davis said. “I believe that’s the way it would have been.”