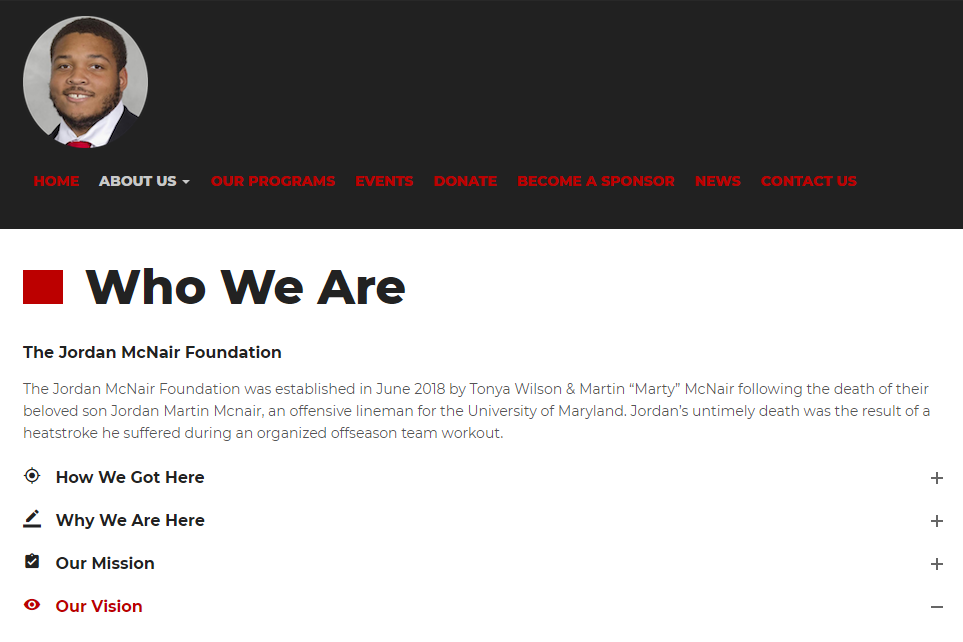 The foundation was created by McNair’s family and aims to increase awareness about heat-related illnesses in athletes, according to its website.

McNair’s cause of death was previously unknown to the public. The state medical examiner did not conduct an autopsy.

McNair was initially hospitalized May 29 after he failed to recover from a conditioning test of 10 110-yard sprints at an organized team workout on campus, according to the timeline presented by the school. He was airlifted to the R Adams Cowley Shock Trauma Center in Baltimore, according to the foundation’s website, and died June 13.

In a statement, the university said the athletic department “continues to mourn the passing of football player Jordan McNair and our thoughts remain with his family and friends.”

“The safety and well-being of our student-athletes is at all times the highest priority,” the statement read. “At the university’s request, Walters Incorporated is currently conducting an external review of all relevant policies and protocols involving student-athlete health and safety.”

According to a GoFundMe set up for McNair’s recovery, he received a liver transplant while hospitalized. Liver failure commonly occurs during heatstroke. When McNair was first hospitalized, former Towson football player Gavin Class, whose playing career was ended by heatstroke suffered during a practice in 2013, tweeted: “Fellow Heatstroke Liver transplant… please keep in prayers.”

According to the National Center for Catastrophic Sport Injury Research, there has been at least one heatstroke death among football players, across any level of play, every year since 2014. There were three in 2017. The NCCSIR reports 20 football players have died of heatstroke since 2010.

This article will be updated.