After less than four months, The Stuffed Turtle is closing its doors 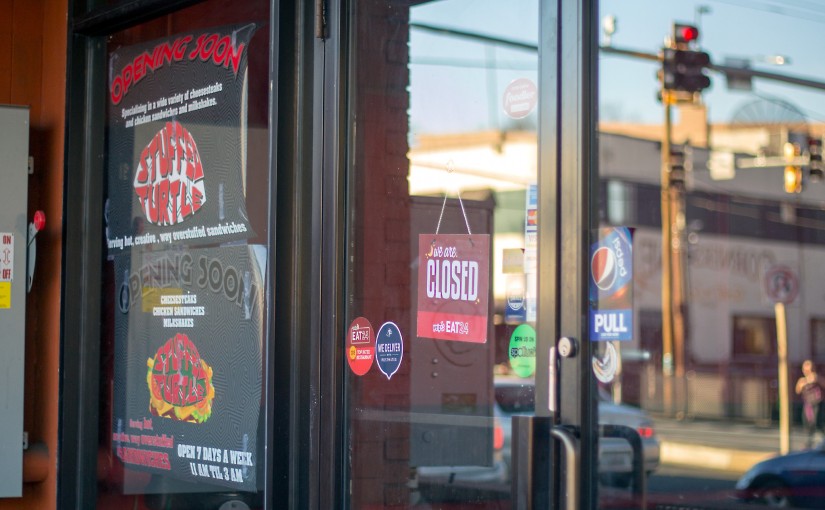 After opening on Route 1 in the spring, The Stuffed Turtle in downtown College Park closed its doors this month.

The restaurant — which served cheesesteaks and other sandwiches with fries as toppings — replaced Fat Pete’s BBQ in February.

Both restaurants were owned by Jeff Holibaugh, who said he made the decision to close the restaurant in May, after the majority of the students had left College Park for the summer.

“I didn’t realize when students leave, we’d do so little business,” Holibaugh said. “I unfortunately realized that my life would be trying to make enough money to last the year, and the most I could hope for would be to break even. What’s the point?”

Holibaugh said he was surprised to see the restaurant fail. He originally opened up The Stuffed Turtle — which was open until 3 a.m. daily — to accommodate the late-night scene in College Park, something he said Fat Pete’s struggled with.

“I went to UMD, and we didn’t eat lunch or dinner, we saved all our money for the bars and at late night,” Holibaugh said. “That’s how we did it 30 years ago. I thought it would’ve changed and that’s my bad. I misjudged.”

He said he received mostly positive feedback about the restaurant, which offered food “more college-kid friendly” than its predecessor.

Zachary Prybylski, a rising senior and management and finance major, said he was disappointed to hear the restaurant closed, as he was a fan of the stuffed sub sandwiches.

“That’s a bummer,” Prybylski said. “I really liked that place. It was a lot of food for a pretty good price.”

However, students will not have to wait long for another restaurant to take its place. Jim McGinnis, principal broker for Restaurant Brokers and Developments — a Washington, D.C-based real estate firm in charge of selling the property — said his firm had already received six offers for the property since listing it.

While McGinnis could not say at this time what might fill the space, he said he expects a new restaurant to open up on the property before the start of the school year.

“We’re not gonna take a pizza place, though,” McGinnis said. “There’s already so much in College Park.”

The Stuffed Turtle is not the only restaurant to depart Route 1 in recent months. The College Park location of burger chain Five Guys closed in March; earlier this summer, nearby Pizza Mart shut its doors as well.

College Park Mayor Patrick Wojahn said while he didn’t expect the closure of the restaurant, he wasn’t surprised to hear about it, either.

“Summer is the most difficult time for restaurants in College Park,” Wojahn said. “It’s the law of averages; lots of restaurants will come and take its place.”

Wojahn said the restaurant’s closure underscores the need for more non-student housing within the city, so as to attract more year-round restaurants to the college town.

In 2011, the city of College Park and the University of Maryland drafted a plan, University District Vision 2020, with the goal of making the city “a top 20 college town by 2020.” As part of the program, the city is offering a grant for employees of the city and this university to buy homes within the city.

“I don’t like to see it, but it doesn’t worry me too much in terms of our overall trajectory,” Wojahn said of the restaurant’s closure.

As for Holibaugh, he said he did not have any plans to open up a restaurant in College Park at this time.

“I will be never be anywhere near College Park again, you can be sure of that. It’s not for me,” Holibaugh said. “[Restaurants] have been in College Park for years, but for me, I can’t figure out [how] to make money there.”