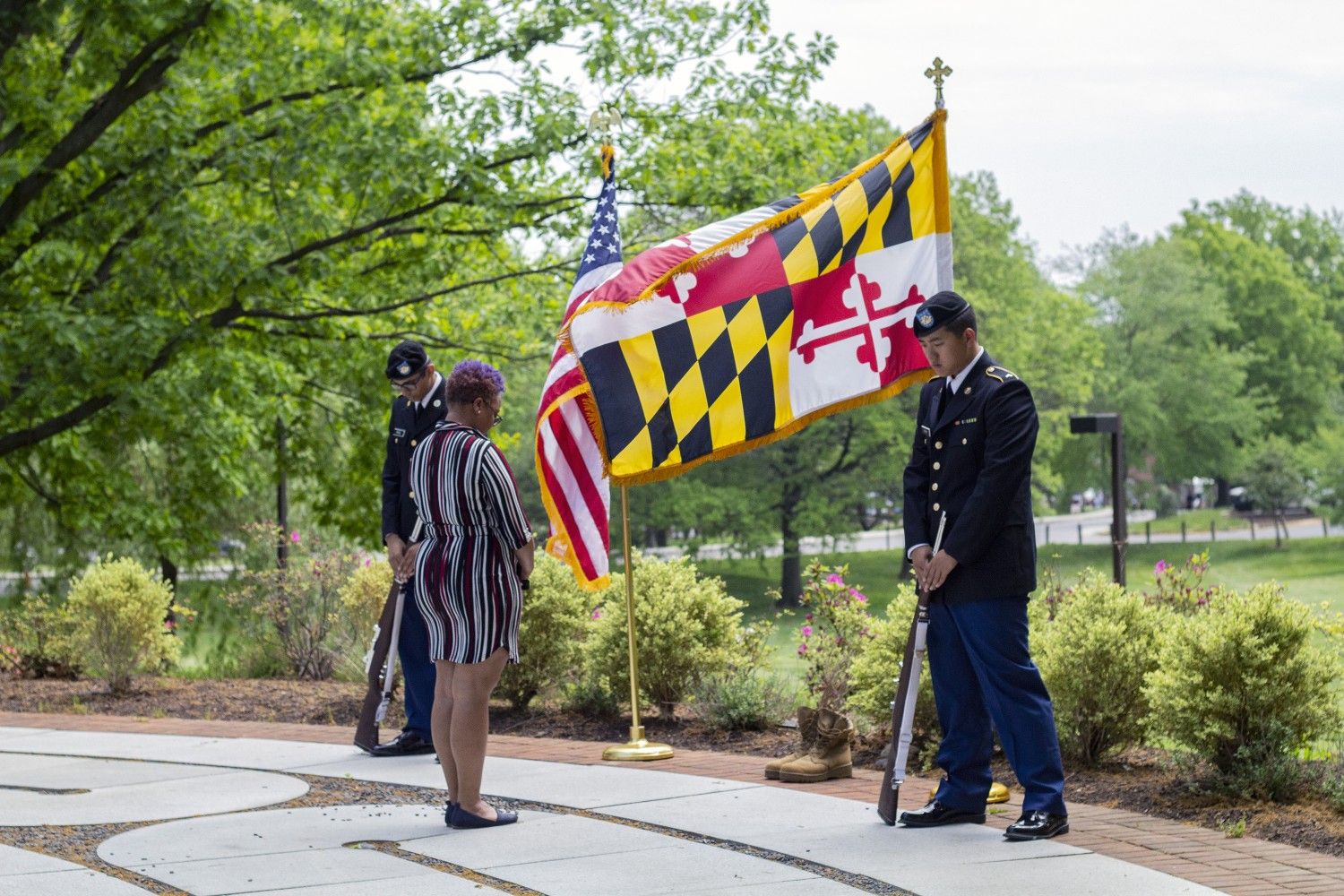 As the University of Maryland Memorial Chapel bell tolled noon, the labyrinth in the nearby Garden of Reflection and Remembrance filled with people.

Members of the Maryland Honor Guard marched into the middle of the circle together. Two of them stood at its edge beside the Maryland and U.S. flags, which were quietly rustling in the light breeze of the cloudy May day. Behind them came a steady stream of visitors, who slowly filled in the circle’s perimeter as small droplets of rain dotted the labyrinth stones.

It had been nearly one year since black Bowie State University student Richard Collins was fatally stabbed on this campus while waiting for an Uber with friends. It was the third time individuals gathered in the garden to remember his life.

Sean Urbanski, a white former student of this university, is facing hate crime and first-degree murder charges in the killing. He is set to stand trial this summer.

United Campus Ministry chaplain Holly Ulmer began the memorial by encouraging those present to reflect on their emotions one year after Collins’ death.

“However you are grieving and remembering, it is welcome here,” she said as she stood in the labyrinth’s center.

Ulmer finished with a non-denominational prayer, and began the hour of silent reflection in Collins’ memory.

[Read more: UMD will have a memorial to Richard Collins on campus]

Some visitors began walking the labyrinth, a few carrying stones to place in its middle, while others remained silently at its edge. Scarcely anything could be heard, save the calling of crows and a train horn far off in the distance.

As the sun began to part the afternoon’s clouds, a military volunteer brought forth a single pair of combat boots and placed them between the Honor Guard members, who stood at attention, rifles in hand.

Collins had recently been commissioned as a second lieutenant in the U.S. Army when he was killed.

Justine Madoo, one of the attendees, said she appreciated that the university hosted the ceremony.

“I’m still affected by this case,” said Madoo, a criminology and criminal justice lecturer. “So [I’m here] to get any opportunity to participate in any university-led memorial or event for Lt. Collins.”

University President Wallace Loh walks the labyrinth at the University of Maryland Memorial Chapel during a vigil in honor of the one-year anniversary of Lt. Richard Collins’ death. (Julia Lerner/The Diamondback)

For the next hour, silence would reign in the garden. More than 50 people came and went, including university President Wallace Loh and diversity task force co-chair Warren Kelley.

The task force, which convened in the wake of Collins’ killing, released its recommendations last month. They included the creation of a policy punishing threatening conduct based wholly or partly on an individual’s “actual or perceived protected status.” The university announced last week that Loh had signed the recommendations.

Katie Zafft, a criminology and criminal justice lecturer, said the task force’s job was challenged by the fact that they were in uncharted waters, but added that she commended their efforts so far.

“It’s probably a difficult path to follow given that nothing like this has happened on campus before,” she said. “It comes at a time that’s very difficult for the nation, so I think they’re probably doing the best they can.”

Madoo said the university should work to promote its values all the time, not just in times of crisis, with measures such as ongoing diversity training.

Bongnwi Tangyie, an employee at the University of Maryland, walked the labyrinth in honor of the one-year anniversary of the death of Lt. Richard Collins III. (Julia Lerner/The Diamondback)

“Only a year ago, Lieutenant Collins left all of us, but his soul continues …. to summon us toward beauty and compassion,” he said from the labyrinth’s center, which displayed the mourners’ stones.

Zafft said she’s glad the university held the memorial, and hopes that it continues to hold events like these as time passes to continue remembering Collins.

“It was a very impactful thing that happened on campus,” she said. “It came at the end of my first year teaching here again, I was a student here and came back recently, and it was terrible … I hope they continue to keep his memory alive.”