Students can test-drive UMD buses on a closed obstacle course 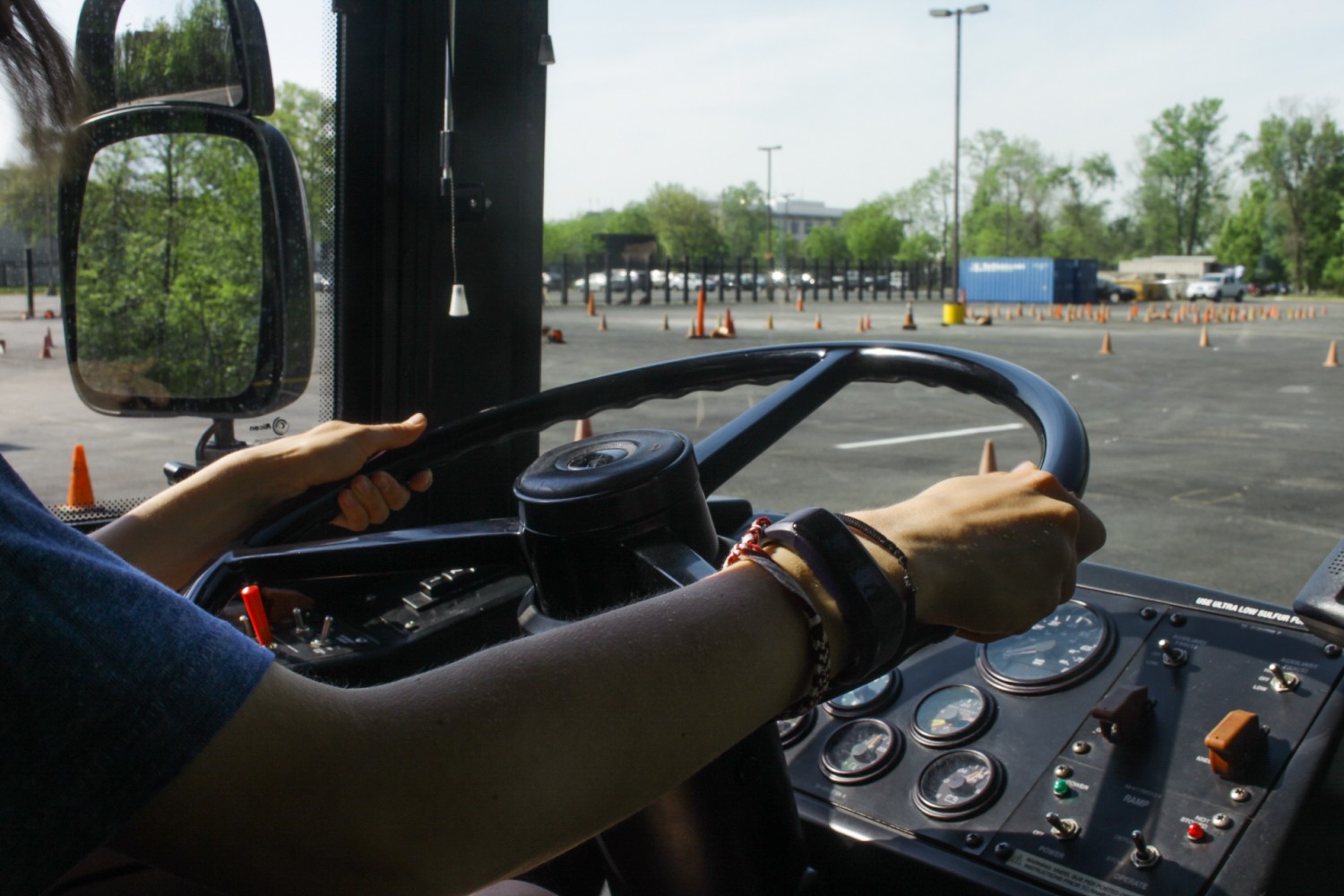 University of Maryland students interested in campus bus-driving can now sign up to drive a DOTS shuttle bus under instructor supervision.

Shuttle-UM Test Drive — a program that allows students to test-drive Department of Transportation Services buses in a closed course — was launched in April, said DOTS recruitment and retention manager Claire Harvey. Harvey is a former staff photographer for The Diamondback.

During the session, students drive a 35-foot shuttle bus in a training lot that’s shared with the University of Maryland Police Department. Students get accustomed to the vehicle by navigating around practice cones set up throughout the course.

Students can sign up alone or with a friend for a free two-hour session with a licensed Commercial Driver’s License trainer in the Center for Advanced Study of Language lot, located near the College Park Metro Station.

“We want to encourage more people to drive the buses, and there’s a lot of fear behind driving them,” said Harvey, a senior civil and environmental engineering major. “We want to give the opportunity to take that fear away.”

The test drive program is separate from training to become a DOTS bus driver, which Harvey said usually takes about two months and about 100 hours. Students who wish to participate in the test drive program need to sign a waiver and show a valid driver’s license, whereas students who want to become shuttle drivers must apply for a position and get accepted, Harvey said.

DOTS created the program to raise interest among students for shuttle driver positions, Harvey said. Only a few students have signed up for the test drive so far, but Harvey said she expects more student requests as DOTS continues to promote the initiative through flyers and social media. The timing of each session is determined on a case-by-case basis.

Student bus driver Vikas Kiran, a graduate student studying mechanical engineering, said he thinks the initiative will help students realize driving the buses isn’t something to be afraid of.

“It’s as easy as driving a car,” Kiran said. “Some people are very scared with big buses, but once you learn it, you’ll become comfortable with driving them.”

Most student drivers struggle to adjust to mechanical aspects of the bus — such as the air brakes — rather than its large size, said Erik Engblom, a DOTS CDL instructor who helps run the test drives. He added that DOTS prioritizes hiring part-time student drivers over full-time non-student drivers.

“We like being a student organization — that’s how it was founded, and that’s how we would like to keep it,” Engblom said. “There’s a lot of colleges that contract their transportation out to other companies, and we’d like to keep [DOTS] within the university — student-run, student-fed.”

Student drivers are more likely to remain in the position, and don’t require the same benefits as full-time employees, which makes them a cheaper option, Engblom said.

Freshman mechanical engineering major Zachary Luc said he wouldn’t try out the new initiative and expressed concern about the safety of the program.

“I don’t know about letting [students] test-drive the buses. … I think they should at least do a background check to see if they’re at least a good driver,” Luc said. “If they’ve been in five accidents in the past two months, then I would not want them to drive me around.”

On Tuesday, DOTS announced multiple shuttle bus cuts and reductions amid a budget deficit of more than $700,000. The changes included complete elimination of the #142 Columbia Park and Ride route and elimination of weekend service for the #104 College Park Metro and #133 Mall at Prince George’s routes.

Despite the budget deficit, DOTS will continue to hire student drivers next semester to accommodate the “natural turnover” of graduating drivers, Harvey said.

Freshman civil and environmental engineering major Claire Hudson said that while she wouldn’t personally sign up to test-drive the buses, the program could spur interested students to start applying for DOTS.

“I heard that it’s hard to get a lot of people to work as bus drivers,” Hudson said. “One of my friends … was thinking about [bus driving]. I feel like if he could actually test-drive a bus, then he would actually go into it instead of just talking about it.”