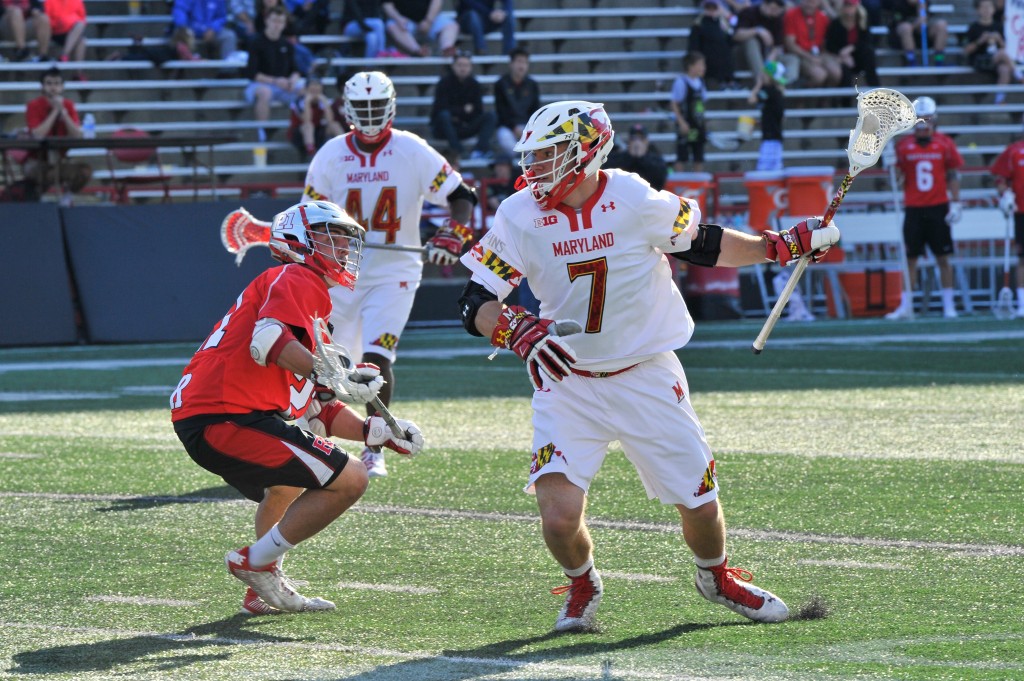 With about 13 minutes remaining in the fourth quarter Saturday, Johns Hopkins attackman Cole Williams swung his right hand into the air in celebration. As he stood on the left side of the crease, there wasn’t a Maryland men’s lacrosse defenseman in sight. Williams capitalized and found the net to push the Blue Jays lead to four.

It was a debilitating sequence for coach John Tillman’s defense, which said its performance in No. 1-seed Maryland’s 8-7 win against No. 2-seed Johns Hopkins last weekend was a gut check after consecutive sluggish outings. But in its second matchup with the Blue Jays in as many weeks, the unit didn’t have an answer for the Johns Hopkins attack.

The Blue Jays had their way for most of the game, gaining momentum from their offensive success in a 13-10 win over the Terps in the Big Ten tournament title game. The loss ended Maryland’s quest for a third straight tournament title and may cost it the top overall seed in the NCAA tournament.

In Maryland’s first loss to the Blue Jays in seven games under Tillman’s leadership, it appeared the Terps would able to rally as it did in their first meeting. Entering the fourth quarter trailing facing a three-goal deficit, faceoff specialist Justin Shockey provided the Terps with a spark, driving to the net after winning the first faceoff and pulling his team within two.

But then, the Blue Jays exposed Maryland’s defense. Johns Hopkins used its quick ball movement and on-target passes to score three unanswered goals. With about five minutes remaining, the Terps faced a daunting five-goal deficit for the first time this season.

In a game of runs, the Terps were unable to generate a response, losing in the Big Ten tournament for the first time since 2015. Maryland hadn’t allowed 13 goals since Feb. 17 against High Point.

The Blue Jays’ attack was dominant from the outset, ending the first quarter on a three-goal run. However, led by midfielder Connor Kelly, Maryland responded with a 4-0 spurt of its own to enter the intermission with the game tied at five.

Maryland seemed to have the momentum when Will Snider scored twice in under three minutes to open the second half. That marked the only time the Terps held a lead. Johns Hopkins ended the third quarter with five consecutive goals, carrying a three-score lead to the final period.

The Blue Jays’ finalized their Big Ten title with a dominant fourth quarter. Terps attackman Louis Dubick scored twice in the final minutes to cut the deficit to three, but the Terps couldn’t draw any closer. Unlike in last Saturday’s triple-overtime win, Johns Hopkins successfully closed the game, handing Maryland its second loss in four games.