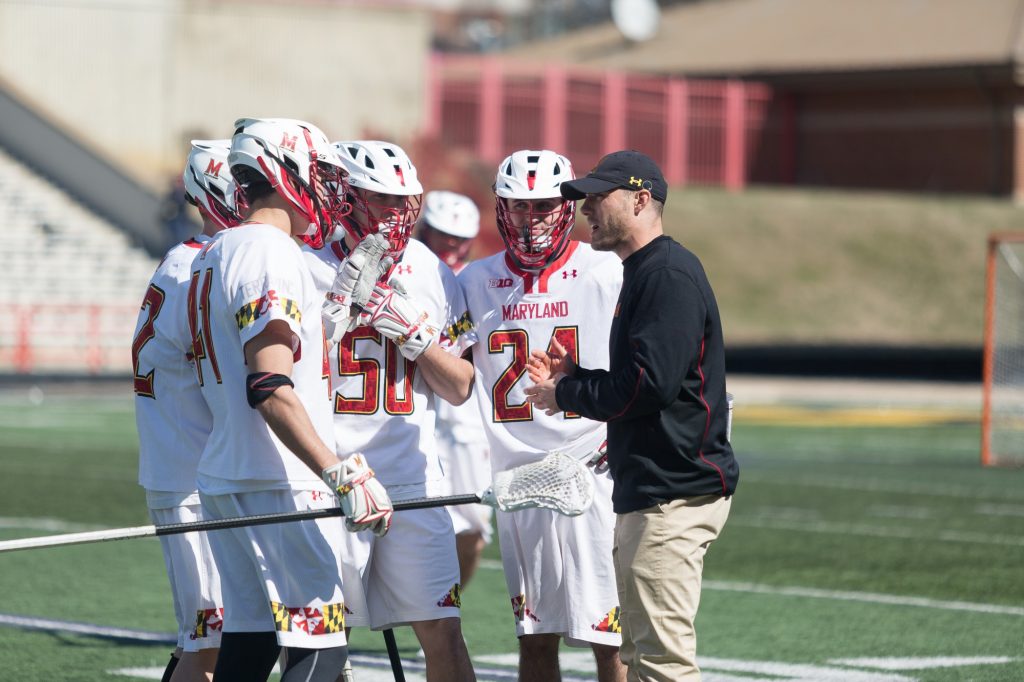 BALTIMORE — As time ran out in Maryland men’s lacrosse’s 12-10 loss to Ohio State on April 22, Bryce Young was so frustrated by the Terps’ defensive performance that he broke his stick over his helmet.

Attackmen Kyle Marr and Cole Williams entered the game as the Blue Jays’ two biggest scoring threats, both approaching 30 goals, but neither could adjust to Maryland’s defense Saturday. Marr found the net just once, and Williams was held scoreless.

En route to their fourth consecutive win in the annual rivalry game, the Terps’ defense executed in a way it hadn’t in nearly a month. The unit held Johns Hopkins to seven scores, well below its per-game average of almost 13 to that point. The 8-7, triple-overtime win marked the first time since March 31 that the Terps allowed fewer than 10 goals, providing defensive coordinator Jesse Bernhardt’s group with a spark entering the Big Ten tournament Thursday.

“We felt like defensively, we had to bounce back,” coach John Tillman said. “The last couple of weeks, we’ve been carved up. They know the standard for Maryland defense.”

The expectations for Maryland’s defense were high after the Terps allowed just four teams to reach 10 goals through the first two months this season. But recently, opposing attacks have had more success.

Penn State posted 12 scores on April 8, and Rutgers found the net 11 times one week later. The Maryland attack was able to outscore the Nittany Lions and Scarlet Knights to help the Terps win those contests, but when Ohio State notched three fourth-quarter goals, the Terps couldn’t recover.

Initially, Johns Hopkins’ attack appeared to have Maryland’s defense solved. The Blue Jays capitalized on wins at the faceoff X with consecutive goals to open the game. But after that, Maryland didn’t allow another in the half, enabling it to boast a 3-2 lead at the intermission.

“It was definitely a gut check,” said goalkeeper Dan Morris, who ended the day with 13 saves. “We take a ton of pride in our defense.”

The unit struggled to slow the Blue Jays to open the third and fourth quarters, as Johns Hopkins scored two unanswered goals to begin both periods. But in the final minutes of the fourth quarter, Maryland prevented the Blue Jays from taking a three-goal lead, enabling the Terps’ offense to come from behind and force overtime.

In overtime, the group didn’t allow the Blue Jays any open looks. Johns Hopkins took two shots in each of the first and second overtimes and didn’t attempt one in the third before midfielder Will Snider won the game.

The Terps defense prepared without knowing whether attackman Shack Stanwick — who’s second on Johns Hopkins in points — would be playing. A Blue Jays spokesperson said it was unclear whether Stanwick, who suffered a foot injury in the team’s win against Michigan on April 21, would play. However, he was in the starting lineup.

“We had three days to prepare for Shack being out there and Shack not being out there,” Tillman said. “It would have been foolish to not expect him to play.”

Still, Maryland’s defense held Stanwick to one goal and limited the attack’s chances in its best April performance.

“We’ve had decades upon decades of great defensemen,” Morris said. “The last couple of games, we’ve been torn up a little bit.”