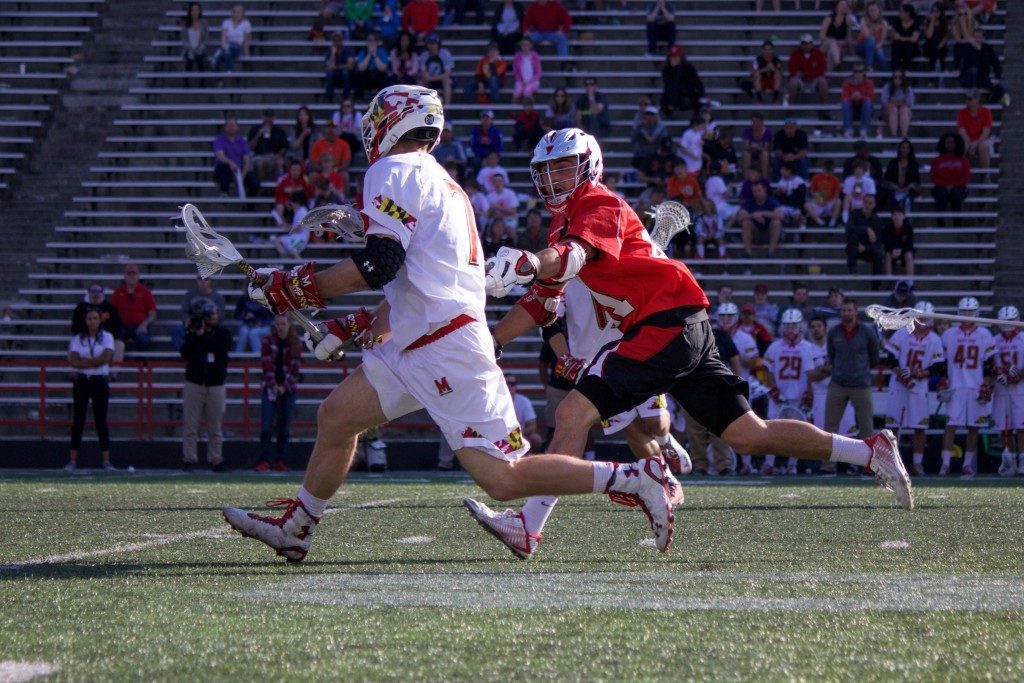 BALTIMORE — After firing a strike from the left side of the crease 49 seconds into triple overtime against No. 7 Johns Hopkins, Maryland men’s lacrosse midfielder Will Snider ran toward the far sideline in celebration. Midfielder Connor Kelly wrapped Snider in his arms and jumped into the air.

The coaching staff watched on as the No. 3 Terps celebrated in a way they had been unable to the previous weekend. Coach John Tillman’s team entered its regular-season finale at Homewood Field on Saturday looking to rebound from a debilitating home loss to Ohio State.

In Maryland’s 8-7 win over the Blue Jays, Snider emerged as an unlikely hero.

The junior evened the score with 2:36 remaining in the fourth quarter to send the game to an extra period, then capitalized on his final chance. With just three goals to his name before Saturday, he nearly doubled his production against Johns Hopkins.

In a contest that at times resembled the Terps’ sluggish loss to the Buckeyes, Snider provided the Terps with a spark. His shot ensured Maryland not only maintained possession of the rivalry trophy for another season, but also won the Big Ten regular-season title. With a top seed in next weekend’s conference tournament on the line, Snider delivered.

“This is it,” said Snider, who estimated he received about 50 texts after the game. “You dream about moments like this. Hopkins-Maryland is something you grow up watching. So it was really an awesome experience.”

Johns Hopkins (9-4, 3-2) controlled the tempo for most of the game, holding midfielder Connor Kelly and attackman Jared Bernhardt — Maryland’s top two scorers — to a combined 0-for-24 shooting.

When attackman Kyle Marr gave the Blue Jays a two-goal lead with about 10 minutes remaining, it seemed the Terps (11-2, 4-1 Big Ten) might end the regular season on a two-game losing streak.

But attackman Logan Wisnauskas found the net with 3:32 remaining to make it a one-goal game, and less than a minute later, Snider’s line-drive shot from the left side of the crease leveled the score, giving the Terps momentum entering the first overtime period.

Maryland took three consecutive shots in double overtime, but none found the net before Snider’s game-winner.

“The energy was a little better,” goalkeeper Dan Morris said. “We came out flat [against Ohio State]. Having that game last week was a good experience.”

From the outset, the Blue Jays’ attack was effective, opening the game with two unanswered goals. The Terps boasted a 3-2 lead at the intermission but struggled to score on Johns Hopkins goalkeeper Brock Turnbaugh. It was Maryland’s lowest-scoring half this season.

The Blue Jays opened the third and fourth quarters on similar two-goal runs, disrupting a Terps defense that Morris said the last few weeks had been “torn up a bit.” But then, Maryland responded.

“I give our guys a lot of credit, even though it wasn’t going as well as we like,” Tillman said. “We couldn’t get into a rhythm for a good portion of the day.”

Led by Snider, the Terps were able to break through in triple overtime, securing their third straight regular-season conference title in the process.

“They’re a good offensive team,” Turnbaugh said. “When we made a mistake, they capitalized. We were a split second too late.”