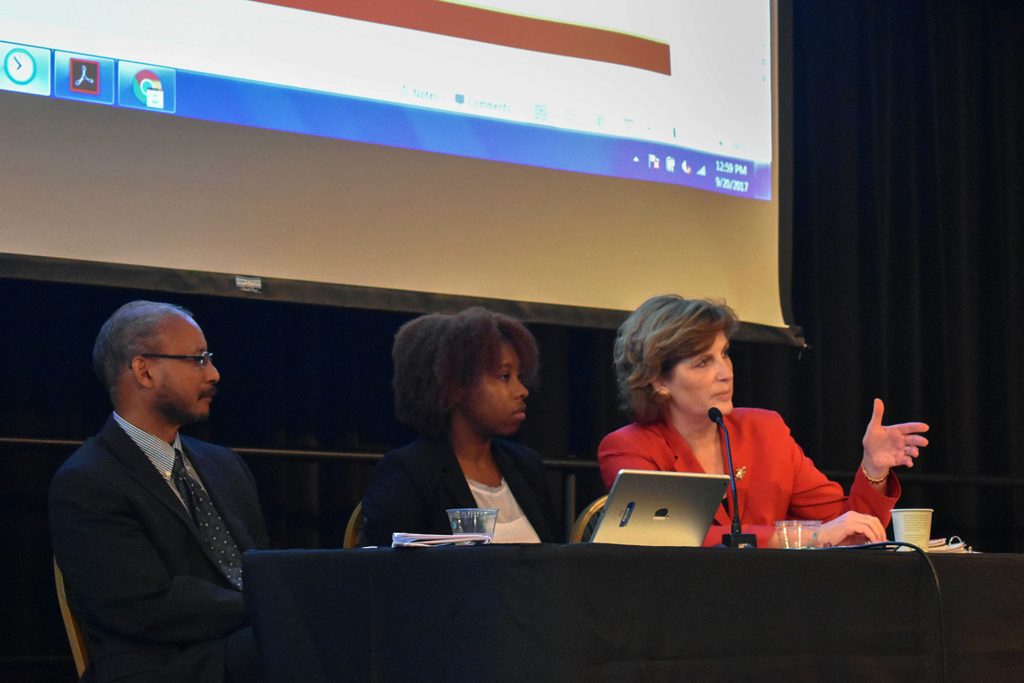 The University of Maryland’s diversity task force released a proposal containing a list of recommendations for combating hate and bias on the campus on Tuesday, including a new policy on punishing threatening and intimidating conduct.

The task force is proposing a policy to prohibit “threatening or intimidating acts motivated in whole or in part because of an individual or group’s actual or perceived protected status,” including factors such as race, gender and nationality.

The policy indicates that remedial actions up to and including dismissal from the university could be imposed on violators based on the severity of the conduct.

This policy would allow this university to “address conduct that doesn’t necessarily rise to the level of a crime but it is threatening or intimidating and is motivated by hate and bias,” said Ishaan Parikh, a junior computer science major on the task force.

The Joint President/Senate Inclusion and Respect Task Force, which was formed in August following the May killing of 2nd Lt. Richard Collins, a visiting black Bowie State University student on this campus, will formally present the nine recommendations at the next meeting of the University Senate on April 24.

If the proposal passes the Senate with a majority vote, it will be sent to university President Wallace Loh for final approval.

The task force will also recommend that this university adopt a values statement highlighting openness and inclusion on the campus.

“The intent was for [the value statement] to be something that we continuously remind each other of and it could become like a theme that’s used in major university events throughout the years,” University Senate Senior Coordinator Sarah Hughes said. “So that at some point it’s so much of a part of our culture that people would understand that seeing those words and those themes … [are] what it means to be a Terp.”

Additionally, the report recommended “a blend of mandatory programs and voluntary learning opportunities” overseen by the Office of Diversity and Inclusion for students, faculty and staff throughout their time at this university. The programs will teach students about topics such as bystander intervention, implicit bias and reflection and dialogue on the university’s values, according to a report released by the task force Tuesday.

Task force co-chair Warren Kelley said that the university should work to teach incoming students the values of the school before incidents occur.

According to Kelley, the task force recommends that this university “try to educate incoming students so that they can be acclimated to the kind of environment we are, the kind of place we are, to understand the things we value and how to be successful as students in that environment when it comes to diversity and inclusion,”

The task force also recommended this university work to better provide members of the campus with information about hate bias incidents in a timely, transparent manner, Kelley said.

“I think they could … do more on this part,” said senior economics major Ying Han. “Students like me probably seldom hear about this kind of information.”

This university announced in November that the Office of Diversity and Inclusion would use its website to inform the campus communities of hate bias incidents, but has yet to develop the system.

Senior information studies major David Wildes also said this university could work to make students more aware of incidents of hate and bias. He added that education programs would be a good way to spread awareness on the issues, but that he wouldn’t utilize them.

“I personally wouldn’t go to them, but it’s great,” Wildes said of the proposed trainings. “If students think [they would be useful], then more power to them.”

On April 10, this university announced that Neijma Celestine-Donnor would take on the role of hate bias response coordinator and will work to support individuals, groups and communities affected by hate and bias.

The task force also supported a biennial climate survey to help this university understand the experiences of faculty, staff and students. The Office of Diversity and Inclusion conducted the first climate survey in January.

Freshman public health science major Sheanice Charles said this university should be more transparent on matters of hate and bias.

“I think a lot of the time things are hidden,” she said. “We know that they are there but at the same time it’s kind of made taboo in a certain way, and as a result, when something happens, people are shocked that it happened when it’s been existing for a while,” she said. “I feel like if we get it out on the table we can … [have] an equal playing field instead of it being hostility towards different groups.”

Three forums were held in the fall semester to give campus community members the opportunity to share concerns and offer suggestions.

“”[The forums were] definitely pretty eye opening — the things that people were saying and bringing to us,” said Parikh, a member of the hate bias response working group. “I appreciated people coming out to the discussion and I think it helped us in terms of doing our work.”

The task force spent the spring semester continuing to consult with students, faculty and staff, while developing their recommendations to present to the Senate, according to the report.

“In all cases, I think the task force has tried to highlight best practices and provide as much flexibility as possible to the administration in implementing the recommendations,” University Senate Director and Executive Secretary Reka Montfort said.