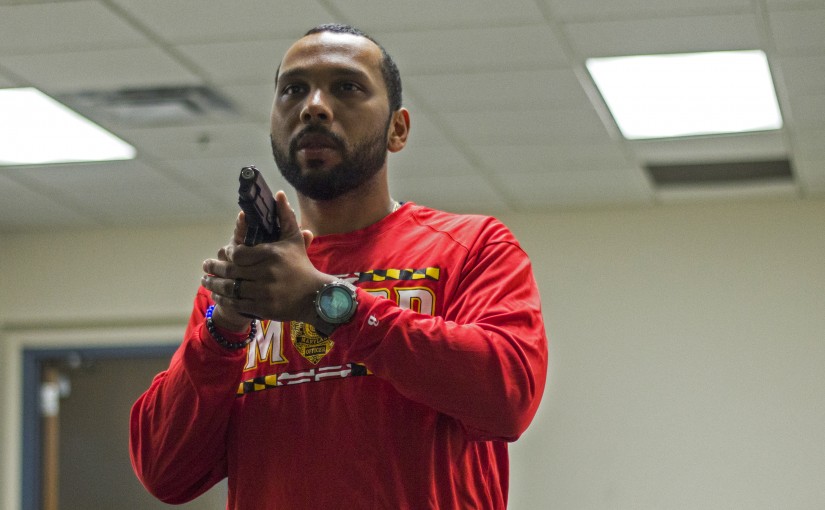 University of Maryland Police are hosting active shooter presentations on the campus to explain police resources and ensure the school is prepared in the case of an active shooter threat.

The presentations — which are offered to any university department or student group that requests them — aim to inform students, faculty and staff on how to survive a shooting, said Capt. Ken Ecker, the main presenter.

“We know this is uncomfortable for a lot of people, but this is something we need to discuss now,” Ecker said, referencing recent mass shootings.

During a presentation for the College Park Scholars Program on Tuesday, Ecker provided tips for reacting to an incident, including preparing emergency go-bags, running with your hands up during an evacuation and using a belt to tie the door hinges and prevent a shooter from entering the room.

Erica Smith, associate director of the Justice and Legal Thought in the Scholars Program, said she thought the presentation was extremely informative, and it has prompted her to add an emergency action plan to her own class. Smith added that she thinks the active shooter presentation should be a mandatory requirement for students, faculty and staff on the campus.

“When you’re in that situation, your emotions are running high, there’s lots of things happening, and you might not remember everything,” Smith said. “If there’s more than one person that knows the information, it’s better.”

Freshman aerospace engineering major Neil Agrawal said that while he doesn’t think that active shooter presentations should be a mandatory requirement for university community members, there should be more education resources for students regarding active shooter incidents.

“It’s ridiculous that students have to be put in this position in the first place. The fact that school shootings are so rampant that we now have to be given presentations on how to deal with shooters, it’s a little upsetting, actually,” he said.

In the event of an active shooting, University Police are equipped with military surplus equipment, rifles, two Humvees and an armored rescue vehicle, according to the presentation. Additionally, police use more than 450 video cameras to monitor campus activity, and an acoustic reporting system that pinpoints gunfire, Ecker said.

“Within three seconds of the shot being fired, it’s registered to [police] headquarters,” Ecker said. “Every second saves lives.”

To prepare for an active shooting, University Police regularly train using a virtual simulation, according to the presentation. While police also use live scenarios to practice responding to an incident, the virtual simulation allows officers to practice much more frequently without spending extensive time and resources, said assistant training director Lt. David Fields.

“[The simulation] gives us a chance to train our officers for half an hour and let them go back out on the streets versus spending a full day getting actors and role players to all come in and set up a large-scale scenario,” Fields said.

Scholars Assistant Director Brent Hernandez said that while the information from the presentation was helpful, it’s important that society continue to address the larger, societal issues that cause mass shootings.

“Figuring out why people want to kill innocent people like that, and then the ways that people are killing a mass amount of people in a short amount of time — I think we need to address all of that.” Hernandez said. “With that being said, I think it’s still always good to have training and preparation on what to do once [an incident] happens. But there’s no simple solution.”