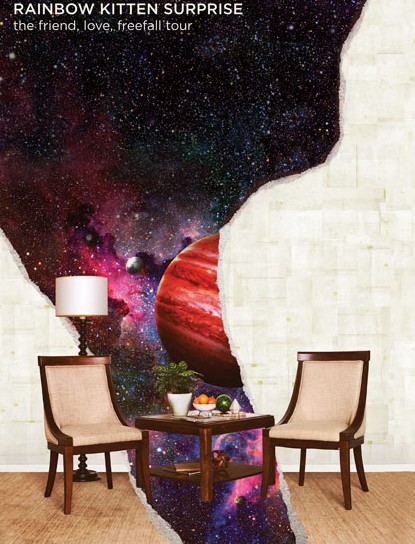 Rainbow Kitten Surprise meshed pure poetry with memorable melodies and impassioned drumbeats to make their latest album, How to: Friend, Love, Freefall, just as magnificent as their past works.

RKS released its new masterpiece on April 6 in the midst of a headlining tour, which stopped at D.C.’s 9:30 Club on April 8. The band will also make rounds during festival season, with shows at Lollapalooza, Velorama Festival and more.

Lead vocalist Sam Melo has one of the most unique sounds in music. His deep and throaty voice is fueled by an expansive range that allows him to exert the deep monotones of “Mission to Mars” and reach the feathery highs of “Fever Pitch.”

Rainbow Kitten Surprise is a master of artistic and poetic lyrics that tug on the heart strings, and this album took that to new heights. “It’s Called: Freefall” is a particularly striking example of this; “Don’t get me venting on friends who resent you ’cause all you’ve ever done is been a noose to hang on to/ They thought was a necklace and reckless they fell into hell where you both hang with nothing to do but …”

Melo’s vocal style evolved from just singing on How to: Friend, Love, Freefall to rapping — or singing with intense speed — on tracks “Fever Pitch,” “When It Lands” and “Recktify,” which adds to how dynamic the band is.

RKS moves beyond the confines of the genres it draws influence from, such as indie, folk, pop and soft rock, by combining them all into singular tracks. For example, “Moody Orange” starts off with folk elements like gentle acoustic guitar and layered vocals, but ends as a melodramatic, whisper-sung, piano tune typical of pop ballads.

One of the best songs on the album, both lyrically and musically, is “Painkillers.” With an understated acoustic accompaniment, Melo utters lyrics of sadness and a cynical lover. The words “Very lovely morning/ Try not to kill yourself today” are powerful and dark but he sings them with such ease and lightness, as though he’s speaking them in casual conversation.

They also managed to create a listen-worthy short song. “Pacific Love” is the 23-second, a cappella, intro track to How to: Friend, Love, Freefall that serves as a nice hook — it doesn’t feel like it exists only to fill space. It’s part of the album’s artistic journey.

“Holy War” is a dramatic narrative full of symbolism and motif only this band could pull off without sounding pretentious. The eerie lyrics are matched with a low-toned sound and thematic musical transitions.

One of the best things about this album is that it sounds just as beautiful on shuffle as it does when played normally. The songs are all so unique that nothing is missing when they are played separately, but connected by lyrical and sonic themes that are only enhanced when the album is played in order from track one to track 13.

Given the strength and quality of the group’s freshman and sophomore works, Rainbow Kitten Surprise had a lot to live up to when creating this album. But How to: Friend, Love, Freefall truly exceeded the power and quality of its predecessors.