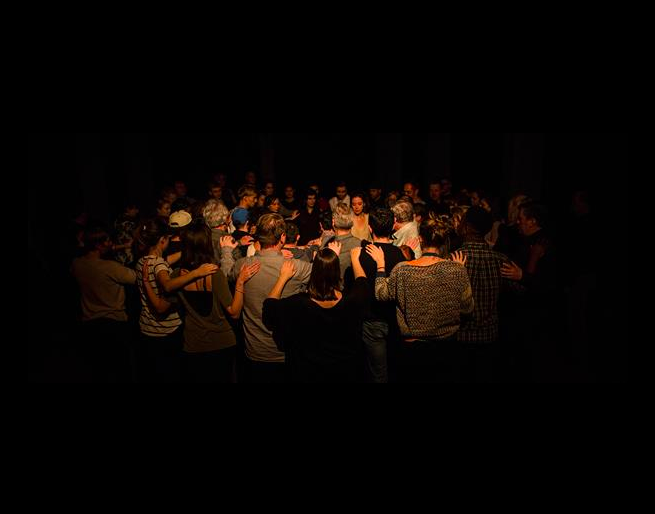 I spent my Saturday afternoon sitting in an open square of chairs staring down at the dark red flooring of The Clarice Smith Performing Arts Center’s Kogod Theatre. I chatted with the audience members around me as we waited for the upcoming performance. Suddenly, a portion of the crowd started doing the wave.

This eventually spread to every audience member. The entire room was moving together, and this was merely the beginning of an hour of collaborative art.

After the wave ended, one woman, Abigail Browde, stood up and began verbalizing a party scene for audience members to imagine. Then she asked an audience member to participate through a series of “will you” questions — “Will you stand? … Will you cover your face with your hands?”

600 Highwaymen, the theater duo, Browde and Michael Silverstone, brought their latest play, The Fever, to this university from April 4 to 7. The nontraditional production requires audience participation to “tests the limits of individual and collective responsibility, and our willingness to be there for one another,” according to the 600 Highwaymen website.

The actors involved blended into the audience until they made themselves known by, well, acting. The play was without any formal introduction — we received programs after the fact and there was no explanation of just how interactive things would be.

One performer stood and asked a couple of audience members to join him, when he suddenly asked, “Will you catch me as I fall?” Before anyone could blink, he fell, asking the participants to reposition his arms as he lay on the ground, then to help him get up.

Another portion of the performance led to every audience member standing together in a huddled mass, helping to essentially crowd surf one of the actors over our own heads, then gently let them down.

Although the activities lacked any sort of logical context, they were very obviously connected in theme. None of the play could have occurred without participation from multiple parties, and the entire work was dependent on the audience. There would have been no show if the crowd had stuck their butts to their chairs.

By the end of the show, there was a sense of connection in the room. We had just created art together and worked to lift complete strangers into the air — forced into camaraderie. There was also a sense of “What the hell did I just do for the past hour?”

In reflection, it’s become clear the message of the show was to find unity in the small things. People are different in a myriad of categories, but we’re still willing to connect in the simplest of ways. As long as strangers are willing to catch each other as they fall, the world is more connected than it seems.