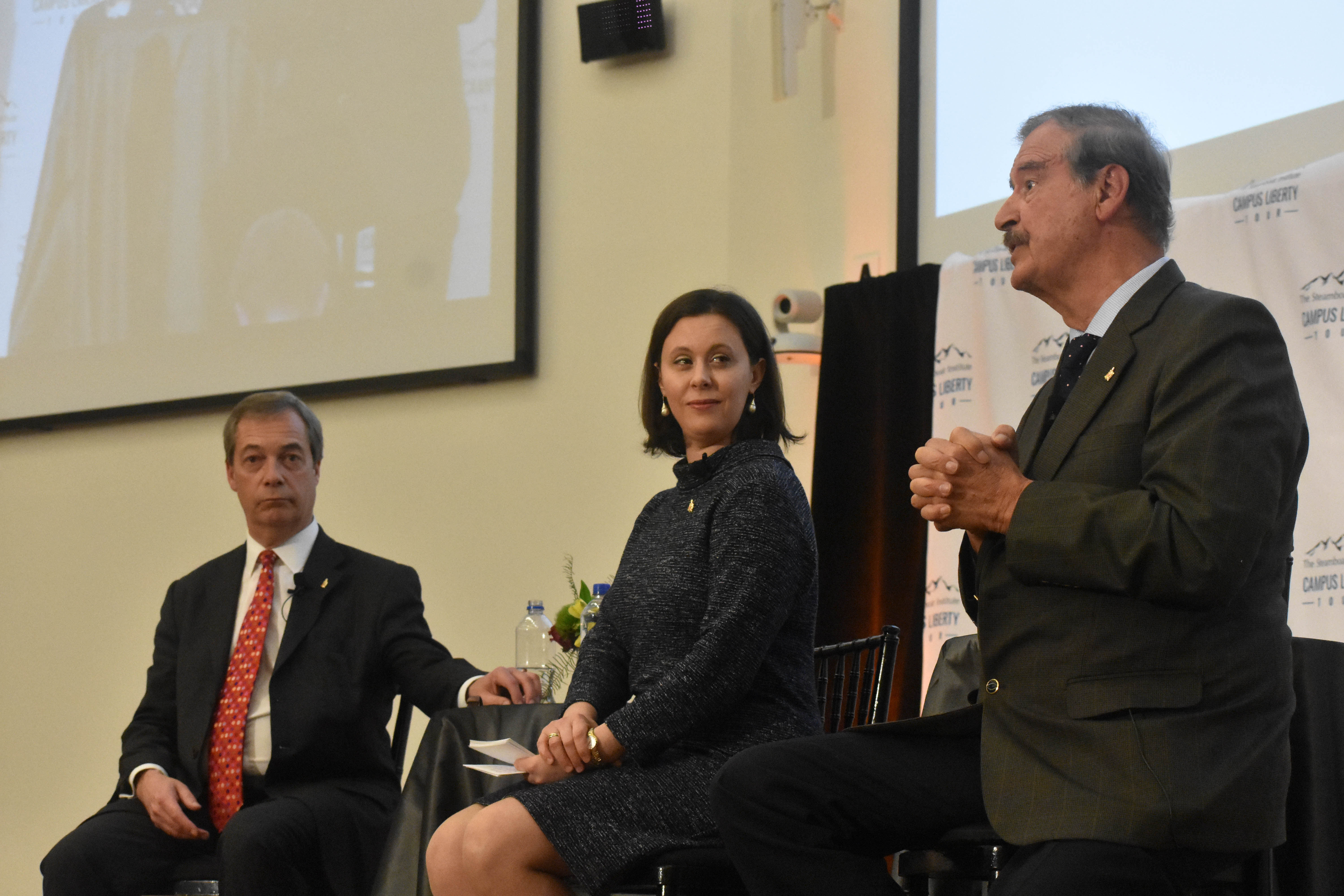 While Brexit — the United Kingdom’s 2016 vote to leave the European Union — had people “choking on their cornflakes,” British politician Nigel Farage told a University of Maryland crowd on Thursday, that was nothing compared to what would come next: the election of U.S. President Trump.

“Recognize that the world changed in 2016,” he said, later adding that the votes were not “a short-term outburst of anger,” but rather “marked a fundamental political revolution that will go on sweeping through the West over the course of the next few years.”

Former Mexican president Vicente Fox debated with Farage, often referred to as the “architect of Brexit,” on nationalism versus globalism and a host of political issues in front of the crowd, 600 strong and chattering with excitement, which wrapped around the Edward St. John building ahead of the evening event.

[Read more: Milo Yiannopoulos on canceled Terps for Trump event: UMD is “going to suffer for it”]

A few protesters clustered outside of the building, holding signs and handing out pamphlets condemning Farage’s nationalist sentiments.

Yvonne Slosarski, an adjunct in this university’s Honors Humanities program, was one of them. She held a sign to protest Farage’s invitation that read “Why does UMD ban Coca Cola but not white nationalism?”

Fox, who served as Mexico’s president from 2000 to 2006, argued in support of immigrants’ rights and organizations such as NAFTA and the United Nations, while Farage decried the EU as an “anti-democratic monster.”

Farage argued throughout the evening that countries should have the right to be the “masters of their own destinies.” He decried lax immigration policies and “bad trade deals,” often drawing parallels between his own country’s dramatic vote and the 2016 election of President Trump. Farage has a history of espousing inflammatory rhetoric about immigrants and once said British employers should be allowed to discriminate against foreigners.

University President Wallace Loh said his office received “many” letters and emails asking that the debate be canceled — something he pointed to as evidence of intolerance on this campus of controversial ideas.

“I am not so sure that we have been so successful in training you to be responsible citizens who know how to live rightly in a free society,” he told the crowd. “The role of a university is not to make ideas safe for students, it is to educate students.”

The event was hosted by this university’s Ed Snider Center for Enterprise and Markets along with The Steamboat Institute, a right-wing nonprofit organization based in Colorado.

Jennifer Schubert-Akin, co-founder and CEO of the institute, said the goal of the tour was to introduce students to “reasoned and intelligent” debates — even if they disagree with the participants’ views.

“It seems like people don’t really have open debates anymore, they just scream at each other,” she said. “It doesn’t take a whole lot of intellectual rigor to just call the other side stupid.”

During the debate, Fox criticized Farage’s stance on immigration and expressed a desire for more welcoming policies, emphasizing his disdain for Trump’s proposed wall along the Mexican border.

“We’re not paying for that fucking wall,” he said to laughter from the crowd.

Throughout the debate, statements from both Farage and Fox attracted scattered applause and jeers from the crowd.

Ken Johnson, a sophomore enrolled in letters and sciences, said he thought it was important for students to be exposed to views like Farage’s.

“I actually thought Nigel brought up a lot of interesting points that a lot of people would not have considered before,” he said. “I don’t think it’s appropriate to stifle the ideas of others just because we don’t agree with them.

Zoey Warecki, a graduate student studying materials science and engineering, also protested outside before the event. She said that even though the event was free, students who chose to attend were implicitly showing support for Farage’s “racism and xenophobia.”

Warecki argued that recent events on this campus, such as the May killing of Richard Collins — a visiting Bowie State University student — made it inappropriate for this university to host the event. A white former University of Maryland student, Sean Urbanski, is charged with murder and a hate crime in the killing.

“Having these speakers on campus doesn’t actually engage in a dialogue. This is a fake debate scripted by a right-wing think tank … where both sides are actually on the same side,” she said.

While the two debaters have differing views on the issue of globalism, Fox, like Farage, is a right-wing politician whose views and tactics are often described as populist.

Shubham Chattopadhyay was one of the students who consistently clapped for Farage’s comments. He said he attended the event specifically to hear Farage speak, adding that he thought those offended by his presence on campus were misguided.

“I myself am not a white man, and I came from a different country to the United States and naturalized just like Loh and everybody else did,” the junior fire protection engineering major said. “I don’t in any way think that [Farage] is xenophobic or racist.”

The two men debated at the University of Colorado’s Boulder and Colorado Springs campuses earlier this week and will continue to Lafayette College in Pennsylvania on Friday as part of the institute’s “Campus Liberty Tour.”