The art of protest at the March for Our Lives 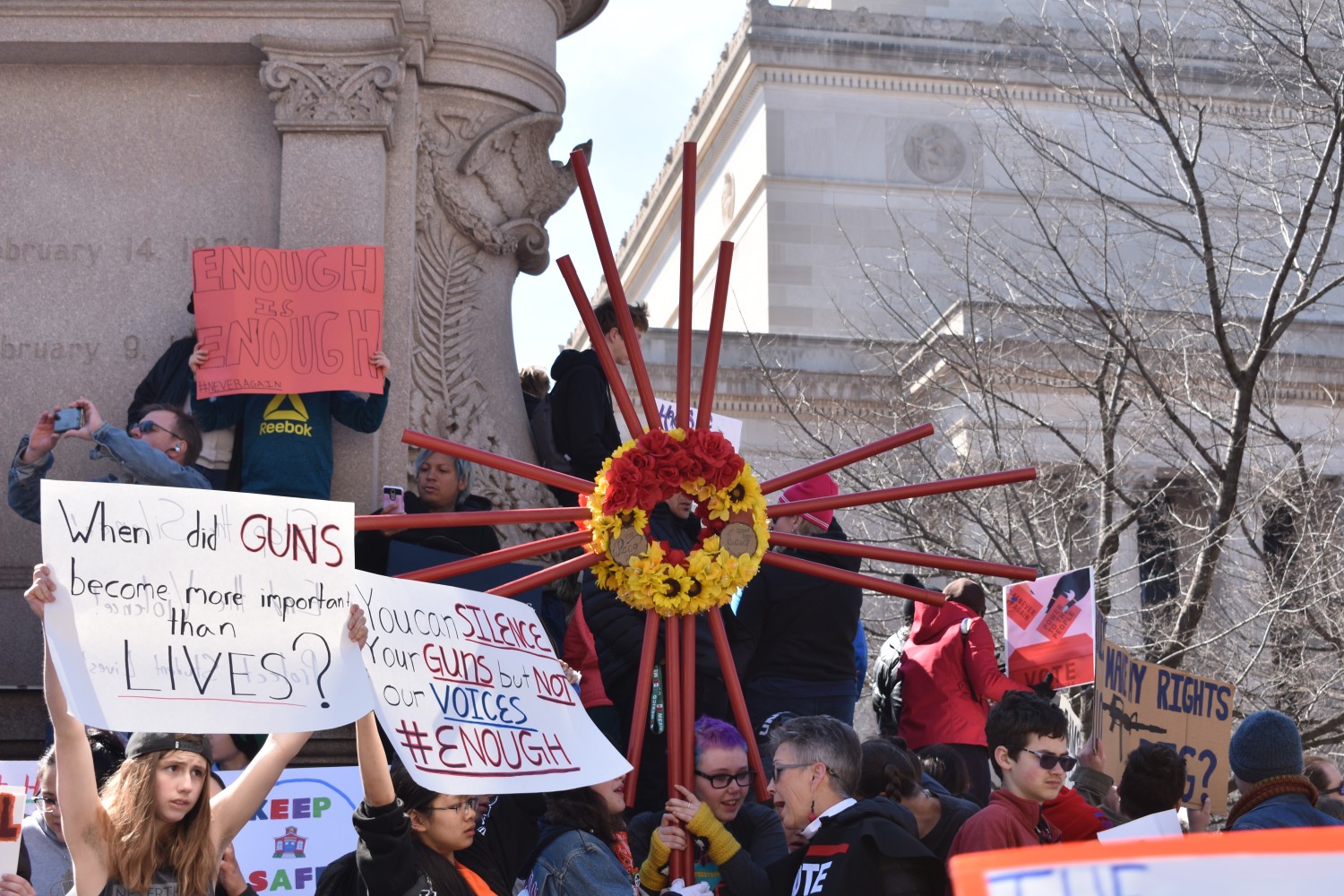 Witty, thought-provoking posters have been a staple of protests and marches throughout this nation’s history. People convey messages of dissent through words and artwork that later show up on magazine and history book pages.

To that end, the March for Our Lives was a show of protest art. Hundreds of thousands of people came to Washington, D.C., on Saturday with posters or symbols in hand to protest gun violence and push lawmakers to make a change.

Among them were students from Aztec High School in Aztec, New Mexico, where a shooting took the lives of students Casey Marquez and Francisco Fernandez in December. They worked with art teacher Shannon Cruise to make a Zia symbol, seen on their state flag, out of cardboard tubes and synthetic flowers, which they carried to honor the late teenagers.

“I think that art in protest is always that kind of dichotomy: You see something beautiful but then you also look a little deeper and say, ‘What does that mean,'” Cruise said. “We see flowers and red colors, but it’s so much more than that — it’s a memorial to someone and yes, that’s beautiful but it’s also really heartbreaking at the very same time.”

Aztec High junior Laurel Paschall stood on the statue of General Winfield Scott Hancock on the corner of Pennsylvania Avenue and 7th Street holding the Zia symbol with her friends. She said the memorial shows how she and her classmates miss Marquez and Fernandez, and that “they shouldn’t be dead for this; they should be here with us.”

“We just deserve to be safe in school, and knowing that we weren’t at one time is so scary,” Paschall said. “I think that every kid in America, in the world, deserves to be safe and feel safe and not be scared that they’re going to die, and I think bringing this and bringing ourselves here shows that, and seeing everyone here shows how many people also support the same cause.”

Ajay Bhandaram, 48, came to the march from New York. He carried a sign that said “Make Love Not Guns,” which he made in his hotel room the night before with those he traveled with.

“It’s a message of love. … I just let my pencil start going and it just started flowing through. I just felt a sense of love and solidarity that so many people are here, so I felt like the ’60s and ’70s where it was all a message about love, that kind of resonated, and that’s how my poster came to be,” Bhandaram said.

He said he has a 5-year-old child and has been participating in gun control protests for many years. He traveled to Washington, D.C., to march “where all the laws are getting made” instead of staying in New York to join a local march.

“I know these damn laws need to change,” he said. “These kids are just getting slaughtered all over the place and it’s just heartbreaking to see all their parents and everybody else losing lives like this. I felt like I just can’t sit there and do nothing about it, so I want to show solidarity. … Numbers count.”

Eli Spicer, a student at Strawberry Crest High School in the Tampa area, said they were able to attend the march thanks to a GoFundMe set up to send students from the area to the D.C. event.

Spicer was carrying a poster made by classmate Ryan Martinez. It was decorated with playing cards meant to represent politicians who are “just playing a game right now.” Spicer also drew a stack of money because “we’re supposed to be represented by the citizens’ voice not money from corporates.”

“I really think [art] calls a lot more attention to what it’s saying, there can be a lot of symbols inside the poster — we have a bunch right here,” Spicer said. “If you just take a minute to look at this, you can tell how much meaning is put into this and how much passion everyone has at this march.”

Even though this march came in response to February’s Parkland shooting, gun violence reaches beyond the classroom. Anamaria Vasquez, 52, showcased a painting she made of faces of individuals killed by border patrol at the Mexican-American border. She said she lived there for over a decade and moved to St. Petersburg, Florida, in September.

“I lived in Colombia and 52 years we’ve been at war, so I have seen and been displaced from the area I lived. Then I moved to Mexico, lived on the border, and I met the family of a 16-year-old boy who was shot 11 times in the back — my son was 16 at the time — and I met many of the families of people who have been killed by the border patrol,” Vasquez said, regarding why she came to Saturday’s march. “So when we arrived to Florida and we hear about the killing [in Parkland], my daughter, who’s in high school, said, ‘We have to go, we have to do something.'”

Vasquez said art is one of the “few ways we still have to speak out.”

“You see that all these artists come up here and this is what’s moving people,” she said. “People are tired of empty words, and something in art touches the heart, this is what you look for you look to touch the heart.”

Posters weren’t the only form of art at the event. Ariana Grande, Vic Mensa, Jennifer Hudson and others gave moving musical performances; teenagers and even an 11-year-old girl who have been impacted by gun violence gave heartfelt speeches and marchers engaged in many impassioned, witty chants.

Protesters shouted “vote them out” on many occasions, and Lily Tillery, 33, brought a poster that echoed that thought. She painted the outline of a woman’s body and wrote “grab ’em by the midterms” — a play on President Trump’s infamous comments from leaked Access Hollywood tapes. She said it wasn’t her original design; she got the idea from Women’s March photos online.

“I added this little snake piece where it grabs because I feel like we need to get the snakes out of Congress who are feathering their own wallets with cash donations from the [National Rifle Association] to buy their silence and their inaction,” Tillery said. “Although all of this is incredibly inspiring and incredibly encouraging, it’s not going to matter if we don’t get the corrupt politicians out of office.”

She traveled to the march from Atlanta but said she grew up in south Florida. She said she didn’t know any Parkland victims personally but came to learn victim Carmen Schentrup was taking piano lessons from the same teacher whom Tillery had learned from years ago — her father even judged Schentrup in a piano performance in the weeks before the shooting.

That personal connection compelled her to make the other side of her poster a list of the Parkland victims’ names, with Schentrup’s name a little larger than the rest.

“I think that art has a big impact on life in general. Art is such an important form of expression just for mankind, that’s how we communicate,” Tillery said. “When you have events like this and there are these statement pieces that stick in people’s minds, it makes an impression and comes to define movements.”

Finding artistic freedom: Senior artists share how their craft has developed at UMD

Travel through the decades at this year’s Art Attack festival