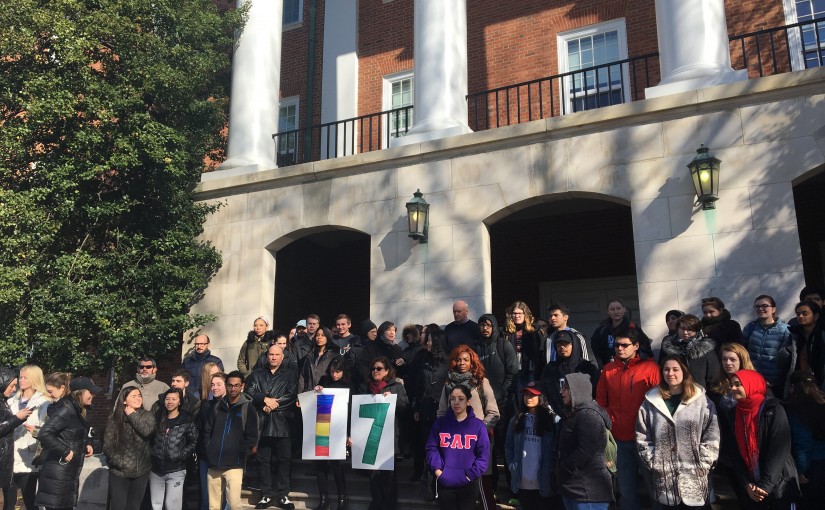 By Jillian Atelsek and Angela Roberts

As the clock approached 10 a.m. on Wednesday, the steps to Jiménez Hall were deserted. Then, as the Memorial Chapel bell began to chime, University of Maryland students and faculty members began to trickle out of nearby buildings’ doors and approach the area from nearby sidewalks. Soon a crowd overflowed from the steps to the platform in front of the hall.

One month after 17 people were killed in a mass shooting at a South Florida high school, University of Maryland students and faculty members gathered outside Jiménez Hall on Wednesday morning to honor the lost lives and call for solutions to gun violence.

Despite the 40-degree weather and gusts of wind, about 60 students and faculty members joined in the National School Walkout movement, huddling together on the steps for 17 minutes — one minute to honor each of the 14 students and three faculty members killed during the Feb. 14 shooting at Marjory Stoneman Douglas High School.

“School shootings in the United States have gotten out of hand and out of control, and people need to start speaking up to change things out here,” said Jessica Barmine, a sophomore public health science and Spanish major who walked out of her SPAN450 class to join the protest.

EMPOWER, the youth branch of the Women’s March movement that organized the nationwide protest, estimated on its website that 3,136 walkouts occurred across the country Wednesday.

“A lot of kids are so busy that they’re not going to go to Congress to try to make changes, but just coming outside for 17 minutes, that’s something simple that’s going to generate a lot of national attention,” Barmine said.

Spanish professor Ana Patricia Rodriguez organized this university’s walkout after reaching out to campus student groups and not finding an already scheduled protest, she said. She tweeted last night to inform the campus community about the time and place of the event, saying, “We stand in solidarity against gun violence.”

Rodriguez clutched a sign displaying a large number seven next to her colleague holding a rainbow-colored number one — referencing the lives lost at the school.

“It could happen anywhere,” she said.

Fabian Faccio, a professor in the Spanish and Portuguese department, left his Spanish business class to stand with the protesters outside Jiménez Hall.

“Half of the students [in my class] wanted to be here, so I accompanied them,” he said. “The Parkland situation has happened one too many times, and something needs to be done to stop it.”

Earlier this month, a grand jury indicted 19-year-old Nikolas Cruz on 17 counts of first-degree murder and 17 counts of attempted murder. Police say he opened fire on his former school last month with an AR-15 that authorities say he legally purchased.

Less than a month after the shooting at Marjory Stoneman Douglas High School, a Central Michigan University student allegedly used his father’s gun to kill his parents on the campus. There have been at least 14 school shootings in the United States in 2018 so far.

Survivors of the shooting pressured Florida lawmakers to pass gun control measures. Gov. Rick Scott signed a bill on March 9 that raises the minimum age to purchase a firearm from 18 to 21 and gives $67 million to a program that will allow some state teachers to be armed.

Douglas students have also been active on social media, denouncing politicians who accept donations from the National Rifle Association, such as U.S. Sen. Marco Rubio (R-Fl).

“I really do admire what the Parkland students have done, standing up for their rights to feel safe,” said Jessica Yin, a sophomore who participated in the walkout.

While she “admired the intent” of the protest, the criminology and criminal justice and physiology and neurobiology major thought it could have been planned better to attract more participants and “express that we’re on their side.”

This university’s walkout comes 10 days before protesters will gather in Washington, D.C., and hundreds of cities worldwide on March 24 to participate in the March for Our Lives, organized by Douglas students “to demand that a comprehensive and effective bill be immediately brought before Congress to address these gun issues,” according the March for Our Lives website.

Senior Hayley Abramowitz said they walked out of their French class during a quiz to show solidarity for the movement. It wasn’t a hard decision to make, they said, adding that they admired those “willing to get in trouble for something that’s so much bigger than you are.”

“It’s putting a thing — a really enormous, glaring thing — ahead of yourself,” the vocal performance major said. “And that’s important for me to do whenever I can.”