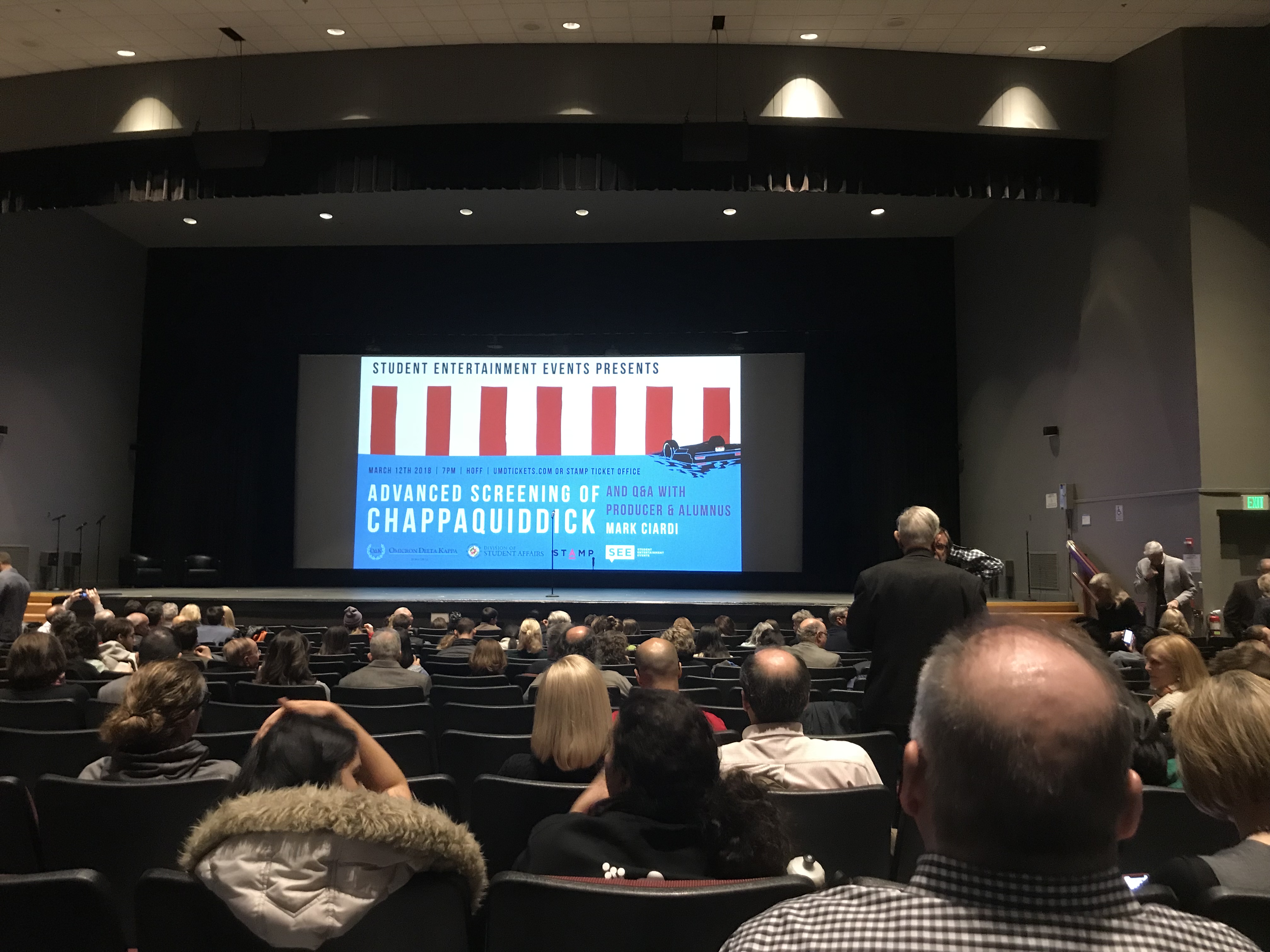 In the early ’80s, Mark Ciardi wandered Maryland’s campus as an athlete and business student set to pursue a career in sports after graduation. More than 30 years later, he sat on the stage of Hoff Theater answering questions about his latest movie.

The university community was able to interact with the film producer and alumnus in a Q&A following an advance screening of his latest film, Chappaquiddick, hosted by Student Entertainment Events on Monday.

Ciardi played baseball at this university, where he earned his bachelor’s in business in 1983. He went on to play professionally with the Milwaukee Brewers in 1987.

He said he didn’t think of getting involved with film until 1999, when his friend Gordon Gray suggested they produce movies.

Gray and Ciardi went on to found Apex Entertainment (now Select Films) together. Ciardi is now the sole CEO of the company and, according to its website, Gray is no longer affiliated.

Until Chappaquiddick, Ciardi and his company focused on sports and feel-good stories, the first being The Rookie in 2002. Chappaquiddick is the story of Sen. Ted Kennedy’s infamous 1969 car accident, which occurred in Chappaquiddick, Massachusetts. Kennedy’s car drove off a bridge into the water, and while Kennedy swam to safety, his passenger Mary Jo Kopechne — a former staffer for his brother, Robert Kennedy — was trapped in the car and died.

The screening was attended by a variety of people — film students; people from Martha’s Vineyard, the community surrounding Chappaquiddick and those old enough to remember the incident.

“Obviously, it’s going to appeal to an older audience that remembers this event, and if you don’t remember the event, it becomes a history lesson for those who had no idea,” Ciardi said. “And I think that it’s in the backdrop of the moon landing, which everybody knows, gives context to it. … It’s a quality movie that people seem to enjoy, it’s piece of history. Even though it’s a dark subject matter, I think it’s important to tell these kinds of stories.”

An audience member asked Ciardi why the movie excludes Rose Kennedy, Ted Kennedy’s mother. He noted that including that side of the story would have made the movie much longer. The film focuses mainly on Kennedy’s aides, all of whom were men, working with him to decrease the incident’s impact on the family name.

Ciardi said the movie’s content is “of its time” regarding women’s representation.

“There certainly was probably the men dealing with this as men deal, you know back in the ’60s, and that war room,” he said. “There were so many characters and people, and really, we elected just to kind of focus on that war room aspect.”

But the film’s portrayal of Kopechne may make up for that, because, as Ciardi said, “she finally got a voice.” Viewers hear about her goals and emotions in the film, making her more than just “the girl who died in Chappaquiddick.”

“I think the [Kopechne] family appreciated that we humanized her and we made her a living, breathing person where she’s just associated with this incident, and they really enjoyed watching this,” Ciardi said. “It was a tough movie to watch, obviously, but they appreciated how we handled her character — smart, funny.”

Ciardi said he’s happy with the film, even though the scenes in the beginning meant to provide background on the Kennedys and the era “maybe feel a little slow.”

“Once they get the car and the incident happens, the movie really starts to roll and you know the aftermath of the accident,” Ciardi said. “It’s really interesting to get a peek behind the curtain of power — and really, the movie is about the abuse of power, more than anything.”

Ciardi said this university “holds a special place in [his] heart,” and because of that, his position on the Board of Trustees and the friends he has in the area, he makes a point to show his films here.

“I just really enjoy coming back to campus and staying connected to the school with the board,” he said. “I’m really just pleased to be able to bring films of different kinds of subject matter to campus. I always try to do that.

“I’m working on a comedy next to shoot this summer, so I just try to do a lot of different types of movies, the ones that I enjoy and really respond to.”