Meet the 6 contestants in SEE’s Battle of the Bands 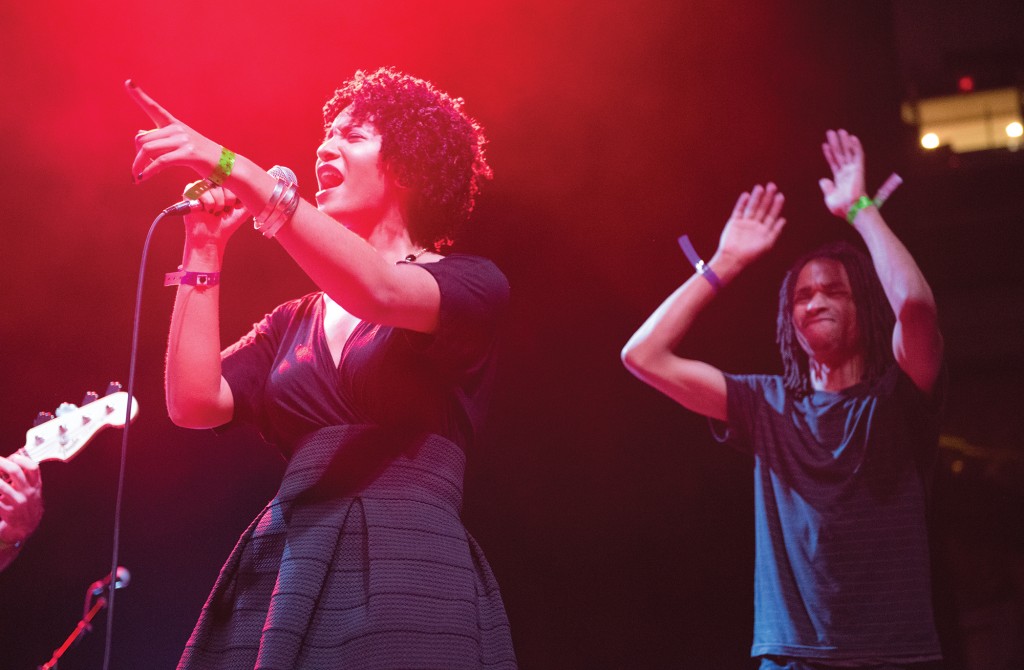 SEE chose six contestants to compete in this year’s Battle of the Bands out of a pool of 30 applicants, according to SEE Musical Arts Director Amanda Ferreira.

Battle of the Bands is a contest to decide the opening act of Art Attack, a yearly concert hosted by Student Entertainment Events that’s generally headlined by a big-name artist. Bands and acts can apply if at least one member is a student at this university.

Ferreira, a senior marketing major, said she and other SEE directors had a listening party to decide on the six acts after Angela Kinsey’s visit to the campus on March 1. They accepted the acts aj iaN, Al Maralen, syl, Joe Garner and The Produce Section, Wallz Baba, and RXN|N (pronounced ronin).

“We look at musical appeal like ‘would we listen to this’ just as a group,” Ferreira said. “And also the technique, we have some people that play guitar and other things within SEE, so seeing how well they’re are doing it and how well they sound as a band, how cohesive they are.”

The first live battle round is on March 12 at 7 p.m. and goes until about 10, Ferreira said. It will be held in the Baltimore Room of Stamp Student Union, where attendees can come and go as they please.

“Baltimore Room is really loud, so they’ll definitely hear the bands wherever in Stamp they are,” Ferreira said.

Each act will perform for 15 minutes, and there will be an audience vote at the end that will be considered along with the panel of judges’ scores. The judges will be a representative from WMUC, concerts director for SEE, Fereirra and a person from the music industry who has yet to be determined, Ferreira said.

On March 13, the top three performers from the previous event will do 30-minute sets. There will be no audience vote, and the winner will be announced at the end.

Daniel Oyefusi is a junior journalism major who raps under the name aj iaN. He said he had “a really dumb name before” and came to aj iaN during a brainstorming session.

“I’m Nigerian, and ‘Naija’ is slang for somebody who’s Nigerian,” he said. “The summer before sophomore year, I was kind of just brainstorming names, and I wrote Naija on a piece of paper and flipped it backwards and got aj iaN.”

Oyefusi said that in past years, he didn’t realize solo acts could apply for Battle of the Bands — he thought it was only for actual bands. He plans on performing some of his rap songs, which can be found at his SoundCloud page, and also singing while playing piano.

“You never know how people are going to react when you play the piano and start singing,” Oyefusi said. “But rapping, that just comes naturally to me, so I’m not too nervous about performing my own songs because I know my own songs.”

He describes his music as having a “real laid-back, throwback vibe” and said influences from Motown, jazz and neo-soul are present in his songs.

“Knowing a lot of the music that’s really popular and mainstream now, I’m not really like that,” he said. “I guess everybody talks about ‘having bars’ but I, like, really have bars. I’m a throwback person. I really like rapping in my songs, I don’t really sing too much, I don’t have that pop-crossover — it’s just me rapping and spitting — so I guess that’s what made me stand out.”

Al Maralen, whose real name is Alex Asifo, planned on applying to Battle of the Bands in recent years, but he said he always ended up thinking, “Maybe I just don’t have it yet.”

This year, the junior journalism major is “revved up” and has been preparing diligently for his upcoming performance in the contest. He said he practices for an hour if he’s preparing his 30-minute set, or 30 minutes if he’s preparing for the 15-minute set, while also working on his stage presence — beyond just rapping.

Asifo describes his music as rap and R&B, but he added that “just to really differentiate myself, I’d say I incorporate psychedelic funk and future bounce.” He said he’s worked with professional producers who have worked for rapper Wale and the group Soulection, so “you can tell that the quality is there and that I’m not just recording on my iPhone and then just uploading it up.”

Asifo’s music can be found at his SoundCloud. He said he’s been dreaming of the chance to perform at Art Attack even before his college career and that the opportunity would be his biggest yet.

“Before I even got to UMD, I put on my wall — and it’s still on my wall right now in my apartment — I put on my wall that I will have performed at Art Attack,” Asifo said. “It would just mean so much to be like, ‘Yo, I’m here, these raps that I wrote in my basement when I was young and thought they would never go anywhere, they’re here now and I get to share it with everybody else.'”

syl, whose real name is Sarah Lee, will be performing alongside her friend Elie Rizk in Battle of the Bands. She felt she wasn’t ready to apply last year, and said if she won and was able to open for Art Attack, it “would reaffirm my belief that good things come to those who wait.”

“This year, I think I’m really ready,” said Lee, a senior communication major. “I think it’s the perfect time — right time, right place, right people, right everything. Everything is just falling into place, and I told myself to be patient and I was and it’s just paying off already. So to open for Art Attack would literally mean that with patience and perseverance you win, and make awesome music.”

Lee hasn’t released any of her music, but said it “is very sultry” and influenced by R&B, pop and hip-hop.

Lee said that quality in her music is probably part of what made her stand out against other applicants. She is also the only woman slated for this year’s Battle of the Bands.

“The past winners, they weren’t females, they were all dudes, so it would be nice to see a female on stage opening [Art Attack],” Lee said, followed by a laugh and a whisper of “dismantle the patriarchy.”

Joe Garner and The Produce Section only became a band last semester, and they were recently signed to Terrapin Record Label, so being selected for Battle of the Bands came “sooner than at least I expected,” keyboardist Andrew Yesnick said.

“Even though we have a lot of pop sensibilities — you can listen to a song and remember the melody, it sticks in your head — there’s also this sort of cohesion and I think technical element that makes us a really good band instead of just having catchy songs,” said Yesnick, a senior government and politics major.

Yesnick stressed that the band sounds good in their recordings, but even better live.

“You listen to the recording, and it gets stuck in your head, and you think, ‘Oh, how could it sound this good live?’ But then we’re also all really good at our instruments, and I think there’s a real energy that comes with it,” he said. “I’ve been really excited to see every single show we play, we play better.”

Yesnick said the band has been practicing to make sure their songs are prepared and they can “stay together and keep it together” in case disaster strikes.

“When you’re on stage, the idea that other people are there to see you — it feels like a privilege just to play for other people,” Yesnick said. “It’s twofold, where we’re so excited that people even want to hear us and it’s also really exciting to be able to get our name out there.”

Wallz Baba, whose real name is Moses Fatola, released his first mixtape, A F R O, in November. He’s applied to Battle of the Bands twice in the past, but this year is the first he made it through. While his music is listed under the “World” genre on iTunes, Baba said it’s a mix of things.

“It’s pretty different,” he said. “It’s an infusion of African sound mixed with hip-hop mixed with R&B mixed with soul, so we bring something different. I feel like it’s very interesting and enjoyable.”

Baba graduated in May with a degree in government and politics but is still enrolled in classes to finish requirements for his minor. He said despite his commercial presence, his music-making process isn’t “too professional.”

“I try to be professional, I try to follow the music industry regulations,” Baba said. “But I still try to make my music-making just spontaneous. I just make music because I feel the music.”

Baba said potentially performing at Art Attack would mean a lot because he and those he works with would have an opportunity to showcase their “different style of music.”

“It would give us a firsthand opportunity to present it to the university campus,” he said. “So I feel like it’s something special, it’s something that we are definitely excited to be able to accomplish if we could win the competition. We’re just ready to give it a go.”

RXN|N, pronounced “ronin,” didn’t think they’d performing at Battle of the Bands because they initially received a rejection email from SEE, according to Kian Kelley-Chung, a member of the collective whose stage name is Uncle Iso. Later that same day, somebody dropped out of the contest, opening up a space for them to perform.

“I was hurt at first, but I’m glad that everything ended up turning out the way it should be,” Kelley-Chung said with a laugh. He added that one of the things they’re most excited about for the contest is “showing SEE what they were about to miss by not selecting us.”

Kelley-Chung, a junior English major, said the collective is centered on hip-hop but each individual in the group is different and experimental. He described their sound as “genre-bending and very eclectic” as members’ styles vary from 90s boom bap all the way to modern trap music.

“We’re all individual, we’re all unique, but we still sound cohesive when we perform as a unit,” he said. “I think that uniqueness that we have allows us to reach a really wide audience because we have something for every kind of listener.”

RXN|N are no strangers to performance — some of their members opened for rappers DRAM and Saba at Dickinson University in November, and Kelley-Chung said they’re most excited for the exposure to the university community.

“It’s just always fun getting on stage and gripping the mic and just being in your element, rapping and performing in front of people and just sharing your music,” said Kelley-Chung. “I look at Battle of the Bands as — it’s definitely a competition, so there’s more at stake, but in the end it’s just a matter of having fun.”