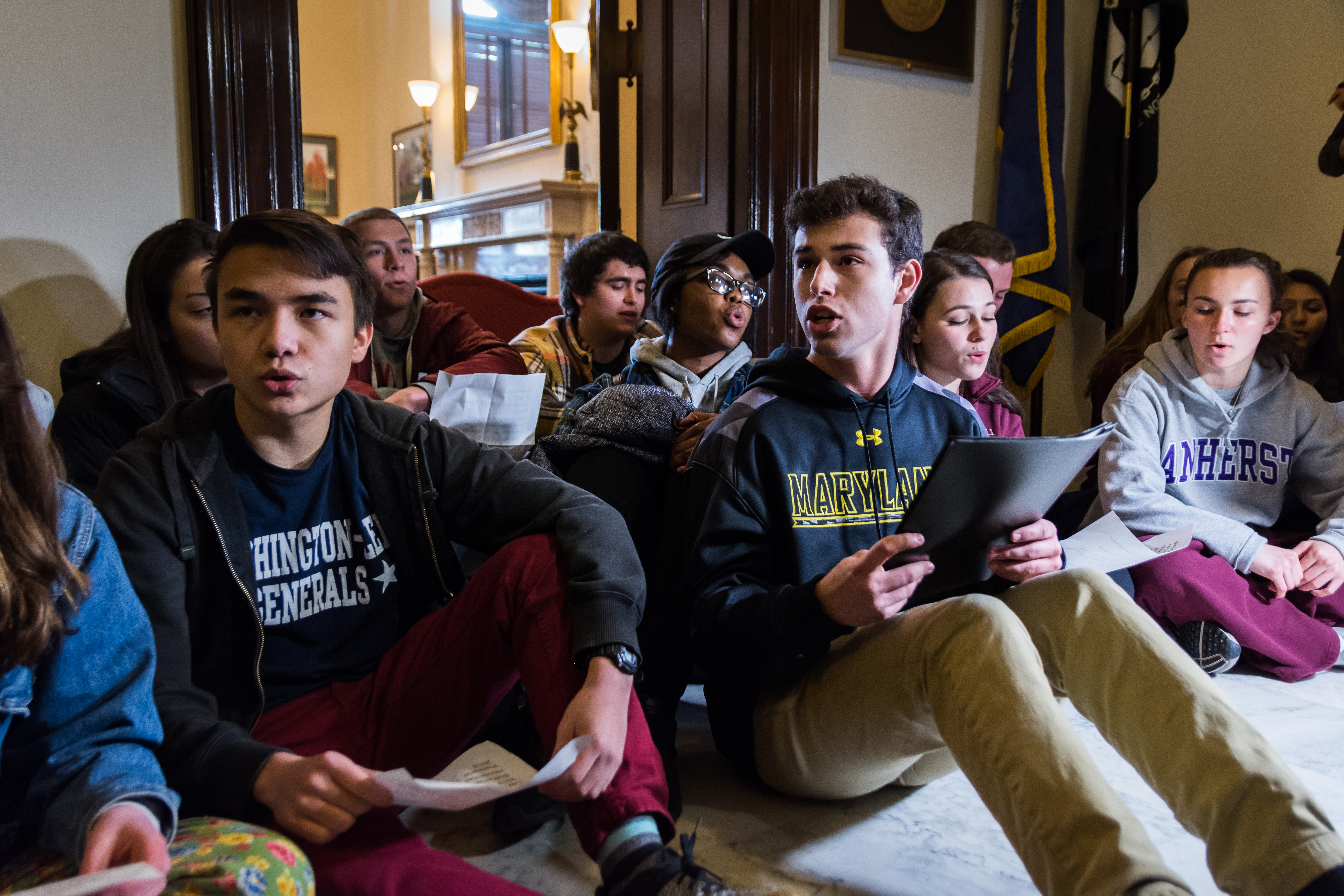 Eight people, four of whom said they were University of Maryland students, were arrested Wednesday following a sit-in protest in Washington, D.C.

U.S. Capitol Police arrested eight individuals who were demonstrating in the Russell Senate Office Building on Wednesday, police spokeswoman Eva Malecki wrote in an email. They were charged with crowding, obstructing or incommoding, she wrote. She didn’t specify whether the individuals arrested were students at this university.

Police did not respond to requests for a list of the names of the arrested students. Alex Dubinsky, Ryan Ridgell, Matt Burnstein and Julia Cortina, all freshmen at this university, said they were arrested.

Dubinsky organized and executed the protest outside Senate Majority Leader Mitch McConnell’s (R-Ky.) office in Washington, D.C., on Wednesday to advocate for gun control. Students sat on the ground outside McConnell’s office in the Capitol Building, chanting “enough is enough” and “not one more,” Dubinsky, a freshman government and politics major, said.

“I certainly admire and support their expression of their heartfelt feelings on this very important subject,” university President Wallace Loh said. “I can’t really say much about why they got arrested, although I recognize that the police have to do their job.”

The students who participated in Wednesday’s protest had no specific list of demands, but they supported a broad range of reforms, such as limiting the sale of assault-style weapons, developing stronger systems for background checks and increasing waiting periods for weapons sales, Dubinsky said.

“It was more successful than I ever could have thought it would have been,” Dubinsky said. “When we walked up the stairs and turned the corner to go toward McConnell’s office, and I saw the massive group of news cameras and reporters, that was pretty shocking and exciting.”

In the wake of the Feb. 14 shooting at Marjory Stoneman Douglas High School in Parkland, Florida, where 17 people were killed, students of the school have gained national attention for their impassioned calls for gun control legislation.

“It’s really easy to empathize with these kids who see their friends, people they’ve grown up with, die in a place that’s supposed to be safe,” said Burnstein, a government and politics major. “I think it’s just a tragedy that there’s a lot of people out there that don’t feel safe in their own school.”

Ridgell said he admired the student activists from Marjory Stoneman Douglas High School, and added that he thinks young people have an important role to play in the national discussion surrounding gun control.

“They’re the ones being affected, and I think they have every right to try to change policy,” he said.

On Friday, Florida Gov. Rick Scott signed a bill that tightens gun control in some aspects, such as raising the minimum age to purchase a firearm from 18 to 21. It also gives $67 million to a program that will allow some teachers in the state to be armed.

Ridgell said that in the days following his arrest, he’s found himself scrolling through Facebook, reading articles written about the event and laughing at “ridiculous” comments alleging that “kids don’t know anything” and that he and his fellow protesters were too young to have an opinion on the issue.

“We’re the future,” Dubinsky said. “We truly are a powerful force, and people will start to understand that.”

On March 24, thousands are expected to participate in the “March for Our Lives,” organized and promoted by Stoneman Douglas students, in Washington, D.C. Dubinsky, Burnstein and Ridgell plan to attend.

Ridgell, a public policy major, said while facing police was intimidating at first, he and the other students — from schools such as American, George Mason and George Washington universities — were laughing and chatting together by the time they were in the van on the way to the police station. Once they were released, they went to lunch together at Union Station, he said.

“It was pretty cool,” Ridgell said. “I think I can speak for all of us in saying that we were all pretty proud of what we did and that we did not regret it.”