Review: In A.J. Finn’s ‘The Woman in the Window,’ the thriller becomes formulaic 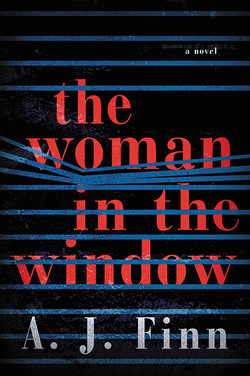 Ever since Gone Girl, thrillers have taken a special place in readers’ hearts and for good reason. Somehow we soak up tales of cunning murder without the bat of an eye, and the more twisted the plot and its characters are, the better the thriller is. Unfortunately, The Woman in the Window by A.J. Finn is neither scary nor revolutionary. In fact, The Woman in the Window is, dare I say, boring.

The name A.J. Finn is the pseudonym of Daniel Mallory, a former book editor. His debut novel, The Woman in the Window, quickly spiked to No. 1 on The New York Times’ bestseller list and is still on the list today. Thus, my expectations were high.

The Woman in the Window centers on agoraphobic Anna Fox, a child psychologist who suffered a trauma about a year prior and copes through it with prescription drugs and alcohol. She also has a habit of watching her neighbors from the windows and knows every detail of all of them except *dramatic pause* the Russells.

They’re the newest neighbors in town, and through a series of events. Anna finds out that the family is not as they seem.

Unreliable narrator? Check. Mental illness and an alcohol addiction? Check. Trauma? Check. Sketchy neighbors? Check. Already, Finn’s debut is turning out to be a stereotypical whirlwind that tries so hard to be something more.

Let’s start with Anna Fox. *Yawn*. Her day basically goes like this: drink some merlot, play some online chess, analyze her patients on Agora, drink some more merlot, watch black-and-white films (because they’re the best), drink some merlot — oh, and don’t forget about the pills.

The other characters are like cardboard, too. They are there for Anna’s well-being and they are there for her to ignore, as she does too many times. It’s as if Finn decided to pepper in a couple sidekicks here and there just so the reader won’t get bored. In that sense, thank you, A.J. Finn.

Unfortunately, throughout the book it felt like Anna Fox’s illness and addictions were an excuse. Gone are the days where our narrator was unreliable because they were just rotten to the core. Now, they need an illness. As someone who struggles through mental illness, it was irksome to see that suddenly, all of Anna’s problems seemingly melt away because she’s been snooping too much.

Speaking of snooping, it’s a surprise that no one has caught Anna Fox being the stalker she admits she is. Finn tells us from the beginning that Fox’s neighbors’ windows face hers, so they’re bound to see her watching them. But it’s because she has agoraphobia and she’s not doing it intentionally (of course). The whole subplot is like Disturbia, but in that movie, shit actually happens.

I’m not dismissing agoraphobia at all. From what Anna suffers through, the illness seems horrible. However, Anna doesn’t need to be agoraphobic — she doesn’t need the trauma — to see her neighbor get stabbed to death. Her mental illness is a plot device — this is a story, and the more messed up our character, the juicier.

In every thriller, there’s a plot twist. Think of any movie by M. Night Shyamalan or a Hitchcock film, or even a contemporary thriller like The Girl on the Train by Paula Hawkins. It’s like shaking a can of Coke and hearing the fizz inside knowing that when you open the can — when you get to the twist — all hell will break loose. I live for the plot twists, and with The Woman in the Window, I died.

Like a bloodhound, I sniffed the plot twist a mile away. That’s from someone who reads a lot of thrillers but isn’t skilled enough to find out the twist before the author does. I was surprised, too. Finn left a lot of clues here and there, and they matched up the further I got in the story, but I immediately dismissed them as red herrings. Surely the author couldn’t think his audience is this dense?

I mean, it was so easy and the ending was so … anticlimactic. I was disappointed. That’s it? I opened the can of Coke but instead of an explosion, I only saw a couple tiny bubbles popping on the surface.

The only wonderful thing that came from reading The Woman in the Window has been the movies. Anna Fox is a self-proclaimed classic film buff, and thanks to her, I’ve gotten a lot of recommendations.