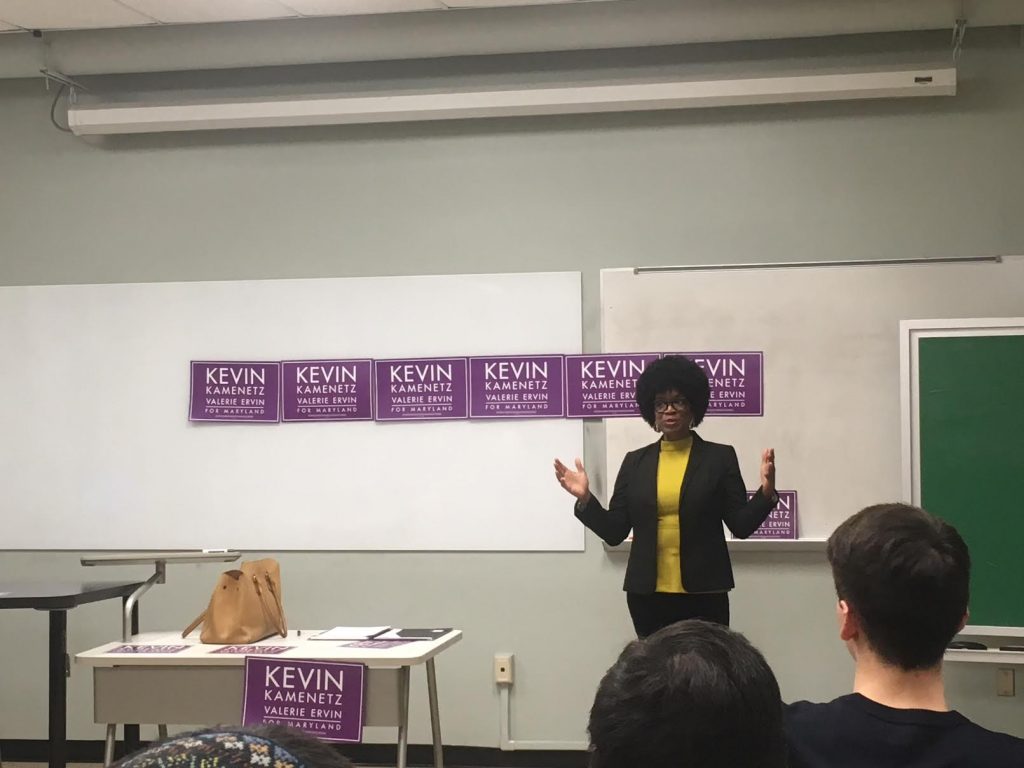 Ervin sat in for Kamenetz, who was originally supposed to speak but couldn’t for scheduling reasons. She was a guest in a speaker series hosted by this university’s College Democrats. Previous guests have included other gubernatorial hopefuls Maryland Sen. Rich Madaleno (D-Montgomery) and former NAACP president Ben Jealous.

Ervin addressed the education gap that she said is holding back some students across the state.

“Every day across Maryland, students are deemed learners and non-learners,” Ervin said to a group of 17 attendees.

After Ervin was elected to the Montgomery County Board of Education in 2004 she worked to provide free breakfast and lunch for school children.

“Children can’t learn if they are hungry,” Ervin said.

Ervin became the first African-American woman to serve on the Montgomery County Council in 2006 and served for seven years. She served on the Education Committee, and was elected council president in 2011.

Ervin said she supports free community college and would consider eventually expanding it to four-year institutions.

Junior Cliff Green said he was happy with Ervin’s stance on free community college but called for a “full measure” proposal.

Ervin is the former executive director of the Center for Working Families, an education and issue advocacy organization for low-income families. She always worked on the Working Families Party, a small progressive political party that advocates for raising the minimum wage, paid sick leave and increased access to jobs.

“What breaks my heart is how many lives have been ruined and how many people have been incarcerated for doing nothing other than getting high,” Ervin said, adding she supported record expungement for those already convicted of a drug felony. “For those who don’t know, once you’re identified as a felon — you can’t rent an apartment, you can’t get a job. There are a lot of ‘can’ts’ that you can’t do once you’re identified.”

[Read more: Maryland has a new sick leave law. Here’s how workers and business owners feel about it.]

“I think it’s really great that she supports [legalization],” Meisel said. “She’s taking it on as a social justice issue because she’s right: Tt has affected far too many people who have gone to jail for it.”

When asked about universal health care, Ervin said the state should already have it.

The promises of health care reform struck a similar chord with Green.