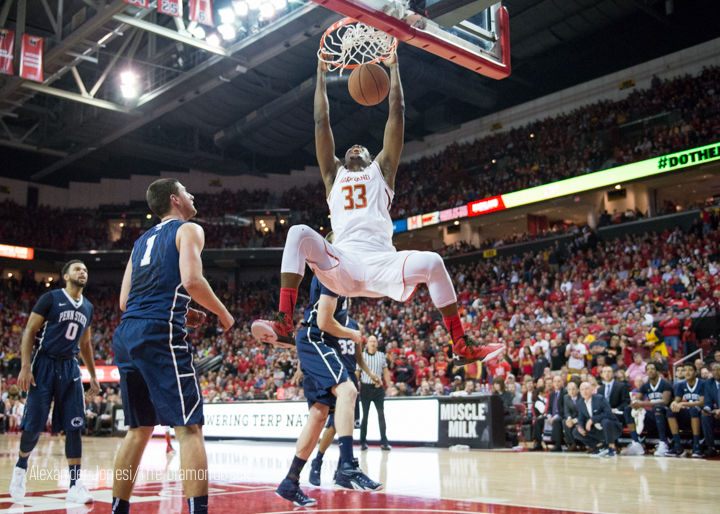 On Thursday, Maryland men’s basketball’s fourth season as a member of the Big Ten ended in disappointment, as the Terps fell to Wisconsin, 59-54, in their first game of the conference tournament.

The loss to Wisconsin by itself wasn’t historical or particularly noteworthy, but it did have a greater meaning in the grand scheme of things. It was the last Big Ten game for Maryland’s first-ever graduating class that didn’t know any other conference as students.

Think about it. Jared Nickens and Michal Cekovsky never played an in-conference game against Duke or North Carolina. Several thousand students who will be graduating in a few months remember their days in College Park for the Terps’ clashes with Purdue and Michigan State, rather than NC State or Virginia.

We want to recap the highs and lows for Maryland’s first four years as a member of the new conference. Since the Wisconsin loss left a bad taste in our mouths, we’ll start with the positives.

Words can’t really do this justice, so we’ll just embed the video for you to watch again.

While the Terps did more winning than losing in their first four years as a Big Ten member, there’s only one time they really had to come from behind in a dramatic fashion to score a victory. That came back in January 2015, when they overcame an 11-point deficit with less than four minutes to go and eventually eked out a one-point win over the Wildcats. The game-winning basket came from one of Maryland’s heroes in its first four years of Big Ten play: Dez Wells.

It may be controversial to choose this dunk over some of the gems that Bruno Fernando has produced this year. But we stand by our decision. I mean, just watch the bench’s reaction to this monster slam.

In Maryland’s four seasons of Big Ten play, a Terp has scored 30 or more points exactly twice. One of them was Melo Trimble against Northwestern last year, and the other was Diamond Stone single-handedly beating Penn State. Stone was responsible for more than half of Maryland’s points, as he took over in a game where Trimble and Jake Layman combined to shoot 5-for-21.

This was as much of a blowout as the score indicates. Maryland made 63 percent of its twos and 52 percent of its threes. Ten different Terps got on the scoresheet, with Robert Carter’s career-high 25 points leading the way.

It was pretty ridiculous the Terps even needed a clutch shot to win this game. Maryland was leading by eight points with 1:36 left before Wisconsin went on a 10-2 run to tie things up with 26 seconds to go. Someone had to come through under pressure for the Terps to escape Madison with a victory, and there was only one person who was going to have the ball in that situation.