UMD should require ethics courses for all students 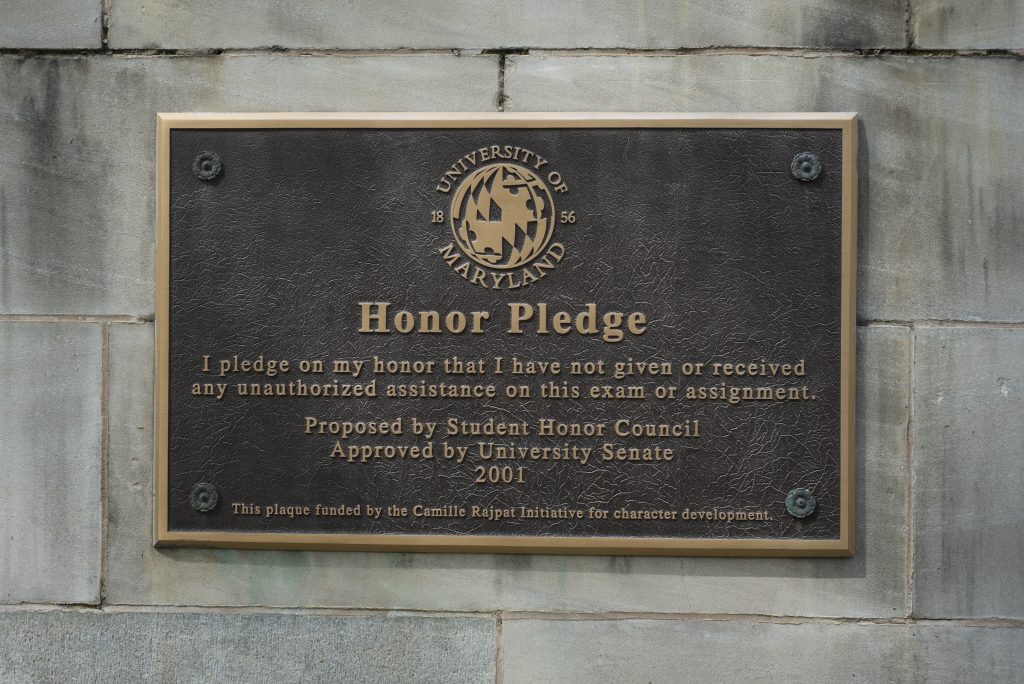 The Honor pledge at the University of Maryland.

From Capitol Hill to Hollywood, ethical misconduct runs rampant — manifesting in cases of corruption, abuse and sexual misconduct, to name a few. These immoral acts destroy lives, tear families apart, upend communities and degrade American society. And at the University of Maryland, we see increasing reports of misconduct. I ask you to be honest with yourself: Do you act with integrity?

When we were children, our parents would tell us to be good. If we were not true to our word, or if we did not fulfill our obligations to ourselves or others, we were chastised. It was expected that these lessons would be enough to carry us through adulthood, but they’re failing. And, really, should we be surprised?

Subjects such as math, science, the humanities and others are largely taught from first grade to freshman year of college. And yet children don’t get a formal education in ethics, instead relying on a patchwork of parental lessons that usually end some time in high school.

Ethics is not less important than any other individual subject. If anything, it is more vital — everyone should exhibit integrity, but everyone doesn’t necessarily need to learn calculus. That’s why ethics should be taught in schools.

Ideally, this should happen from first grade and continue on through a child’s education. Since this is obviously not the case, colleges should at least pick up the slack. At this university, degrees in most majors are awarded with no requirement to complete any sort of coursework in ethics. As this university rightfully seeks to raise its national profile, it can take the lead on this issue.

Mandating that every major institute an ethics course requirement for graduation would be a bold step in the right direction. It would be a feasible one too, as journalism and philosophy already do so. The university could start with the government and politics major, which may be the preferred major of aspiring politicians, to help ensure that Terps who work in Annapolis or Washington after graduation serve as moral exemplars. Or, the administration could begin by expanding the ethics requirement from accounting to all the majors in the business school.

Until this university makes these much needed changes, the University Student Judiciary is working to fill the gap. it will be hosting its annual Integrity Week, beginning in the end of February, holding a variety of events to remind students to act with integrity. But Integrity Week in itself is far from enough.

All Terps have the ability to become true leaders; not just intelligent and competent, but moral, too. Many already are, yet we can all benefit from taking a moment to reflect on our decisions to determine how we can be better in the future. And, though not a panacea, university-mandated coursework in ethics would go a long way. It is up to the administration and students alike to produce a generation of leaders who uphold moral and ethical values as dearly as they hold success.

Julian Savelski is a junior government and politics and philosophy major. He can be reached at juliansavelski@gmail.com.