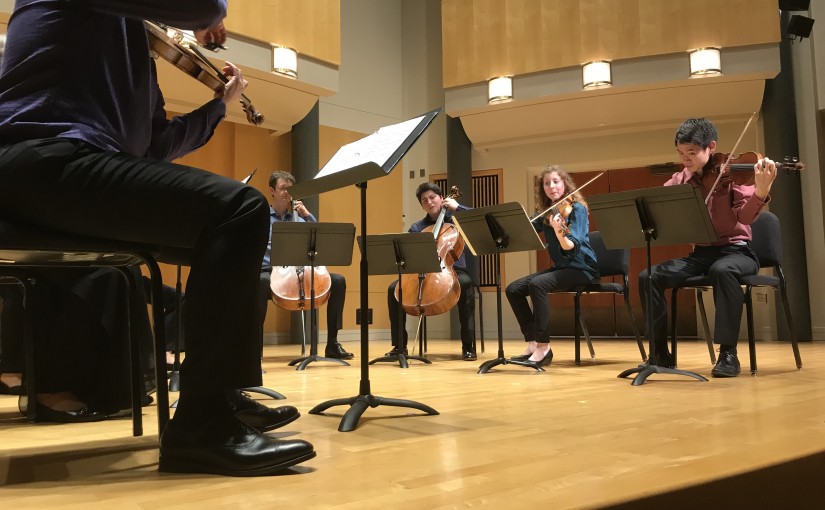 The four students who make up the Omer Quartet brought the Music for Food initiative to The Clarice Smith Performing Arts Center on Feb. 22, and raised more than $500 for the University of Maryland Campus Pantry.

Music for Food is “a musician-led initiative to fight hunger in our local communities,” according to their website.

They became involved with Music for Food in 2015 while studying at the New England Conservatory, Cox wrote in an email. He added that the founder of Music for Food, Kim Kashkashian, was Hong’s viola teacher which allowed the group to “get to know the mission very personally.”

Music for Food mostly works in the Boston area. Cox said their goal in bringing the initiative to College Park was to “develop the relationships and build out the model so students could continue this mission even after we graduate.” The Feb. 22 concert was the second Music for Food concert at this university — the first occurred in the fall 2017 semester.

The concert itself consisted of three separate performances by the Omer Quartet and various other musicians from the University of Maryland or the D.C. area. Those involved were not compensated for their time in any way.

“For this concert in particular [there] were two different groups made up of faculty and students which donated about 16 hours combined to rehearse together on top of their busy schedules to bring a top rate performance to the audience,” Cox wrote.

For freshman psychology major Alicia Gordon, the charitable outreach was one of the most impressive aspects of the show.

“I think that’s so cool and props to them for doing that because that’s a lot of work,” Gordon said of artists performing for free to raise money. “I’ve done music in the past and I know how much work that is to do all of that [preparation] and have no gain for themselves, so that’s really good that they’re doing that.”

“As a kind of mission, one of the things we’re committed to doing is using the talents of our students and faculty to engage members of the community and increase access to the arts, particularly for underserved populations,” Geary said.

Although the music school was supportive of the Omer Quartet’s organization of the Music for Food concert, Geary placed emphasis on the students’ individual drive.

“It’s worth noting that this is something that the students have taken on themselves, the Omer Quartet has really taken it upon themselves to do this,” he said. “Now, it fits perfectly within our body of community engagement work that we do here at the school of music and that we’re trying to engage our own students in, but this is an example of how students are being entrepreneurial, bringing their own ideas.”

Before the concert, members of the quartet explained the influence the Campus Pantry has on the students, staff and faculty it serves. In the middle of the concert’s intermission, Yu announced they had raised about $400, which he said equals about 1,100 meals. The group then went on to raise more than $100 after the intermission.

“Hunger is an invisible burden that many of our neighbors struggle with daily and no one should have to struggle alone,” Cox said. “The first step is bringing awareness, and to act. That’s essentially what these concerts are all about.”