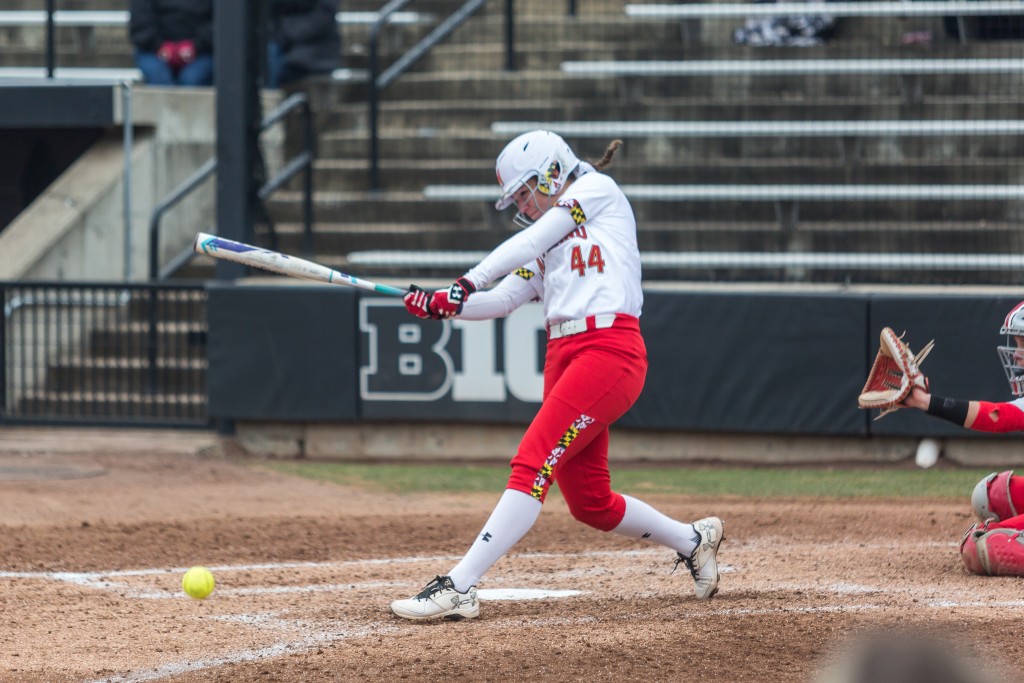 Maryland softball came back from three separate deficits on Sunday morning but was unable to pull out a victory, losing 8-7 to Illinois State in eight innings.

The Terps played from behind from the very first batter, as Redbirds leadoff hitter Shannon Felde hit a leadoff home run off starter Ryan Denhart.

Maryland took the lead with two runs in the bottom of the first on a two-run triple by infielder Jacqui Pascual.

Illinois State struck back with four runs in the top of the second using a single, error and two-run double to push the runs across.

Maryland scored twice in the third to cut the lead to one and tied the game in the fifth on a home run by infielder Brigette Nordberg, her third hit of the day and her second RBI. The homer was Nordberg’s first of the year. Nordberg had a terrific weekend in Gainesville, raising her average from .259 to .439.

“Brigette has been on this path the whole season,” coach Julie Wright said. “It’s a lot of fun for her right now, the ball looks like a watermelon.”

Illinois State regained its advantage in the top of the seventh with a two-run single by infielder Andrea Coursey.

In the bottom of the frame, Maryland was pushed to its final out before a bases loaded error allowed two runs to score, tying the game.

Both teams started the extra inning with a runner placed on second base. The Redbirds brought their runner in on the first batter, when infielder Allison Spence hit an RBI single to center field.

In the bottom of the eighth, Maryland started with designated player Bailey Boyd on second. A groundout by infielder Mikayla Werahiko moved Boyd to third, but Redbirds pitcher Sarah Finck forced two more groundouts to escape the jam and end the game.

“When there are runners in scoring position, either when we’re on defense or on offense, that seems to be the moment we’re faltering and maybe making mistakes,” Wright said.

Maryland put up its second highest run total of the season with the seven-run performance, trailing only its nine-run outburst on Friday against Iowa State. Those are the only two games the Terps have scored more than four runs.

The loss is Maryland’s fourth in a row, moving it to 3-11 on the season. Despite that record, Wright remains optimistic.

“That was a tough game to lose,” Wright said. “I know what it looks like out there, but from the inside, what I’m seeing is them growing like crazy.”