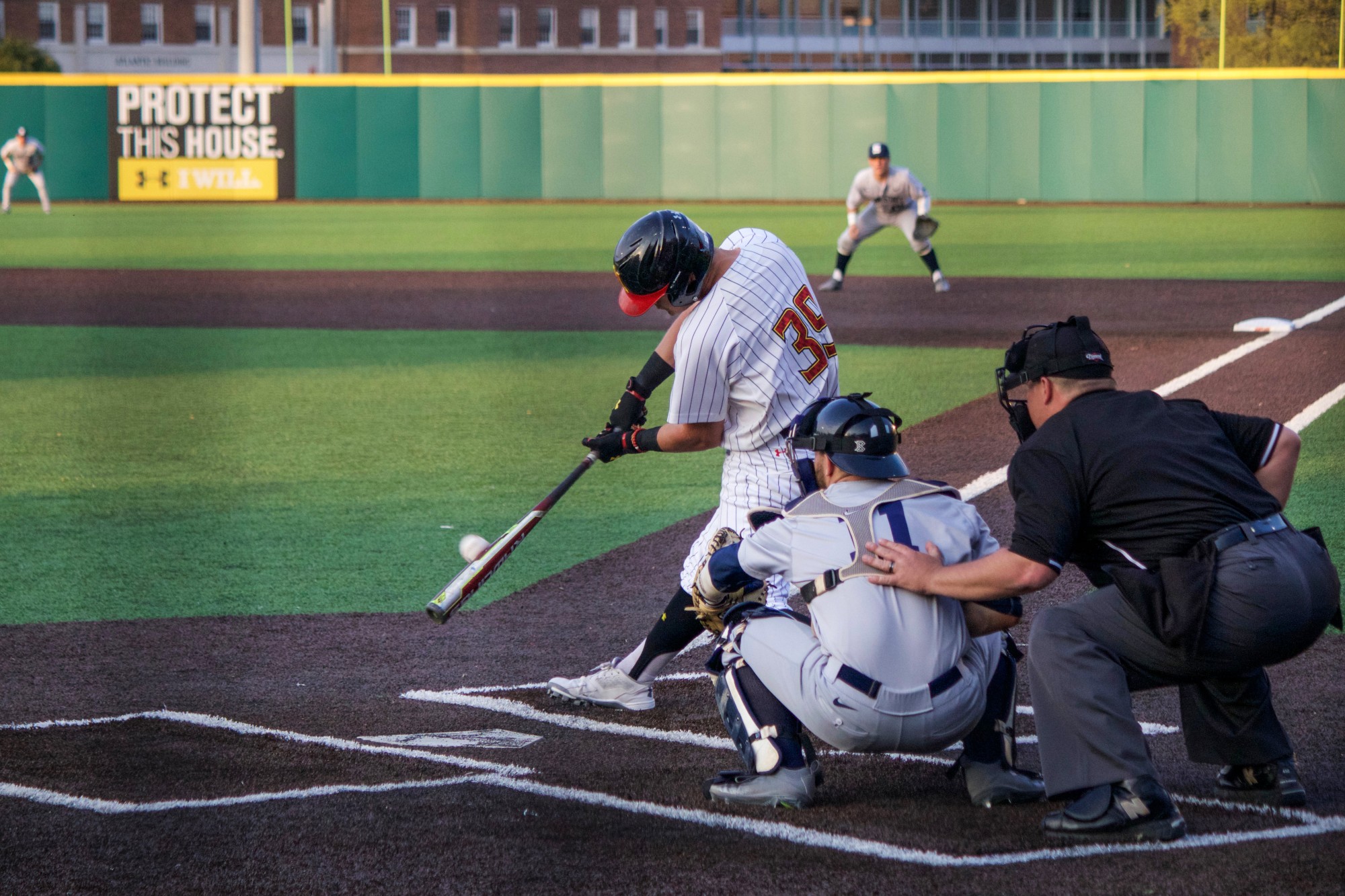 Maryland baseball left fielder Marty Costes was hitless in his past 18 attempts, but when right-hander Sam Messina’s pitch grazed the junior’s arm to lead off the third inning, his aggressiveness on the bases helped jumpstart a sputtering Terps offense.

Costes nabbed second on the first pitch after his free pass, and he swiped third during the same at-bat before second baseman Nick Dunn drove him in with a double. That sequence uncorked enough of the high-powered offense the Terps displayed against Tennessee last weekend to capitalize on a low-scoring Army side.

After Maryland squandered solid starts from Taylor Bloom and Tyler Blohm with consecutive four-hit outings on Friday and Saturday, the Terps’ patient approach at the plate, resulting in eight walks, secured its 6-3 victory Sunday and avoided a series sweep to Army.

“We kind of throw traditional baseball rules out the window and even if we’re down, I think part of what makes us good is forcing pressure,” coach Rob Vaughn said. “The fact that [Costes] was able to embody that, I mean, stealing second, stealing third, getting there and being aggressive, really sets the tone for the rest of the week.”

“The first two days we were almost a little too aggressive,” first baseman Kevin Biondic said. “We were still as aggressive [Sunday], but we got more, or better, pitches to look for.”

Messina was also roughed up in 3 1/3 innings facing the Wolverines, but the Terps’ early aggression failed to take advantage of Messina’s erratic pitching.

When Costes was hit in the third, it marked the end of Messina’s command. The junior right-hander’s wild pitch plated Dunn from third later in the frame, and he hit three more batters during his 4 2/3 innings.

“[Hitting coach Matt] Swope and Vaughn,” Bednar said, “they always preach, ‘Pass it on to the next guy.'”

Biondic tripled to lead off the fourth and later scored on a groundout. Maryland took a 4-3 lead after Messina (0-2, 9.00 ERA) walked in a run on loaded bases.

Bednar then launched a home run to left field to give the Terps a two-run lead before walking in another run in the eighth, setting up right-hander John Murphy’s six-out save.

After right-hander Hunter Parsons (0-1, 14.14 ERA) was shelled in his season debut against Tennessee, allowing eight runs in one inning, he rebounded with a solid relief appearance in the Terps’ loss to William & Mary on Wednesday and retired Army in order in the first Sunday.

Two relievers sprinted from Maryland’s dugout to warm up in the second as Army center fielder Jacob Hurtubise hit a two-RBI single to lace Parsons’ promising start with doubt. But despite allowing three runs, Parsons completed 4 2/3 innings, surrendering three hits and five walks in his no decision. Maryland’s bullpen closed the door in the series finale.

“He gave us a chance to win today,” Biondic said. “Maybe it wasn’t his best inning, that second inning, but he came back the rest just dominant.”