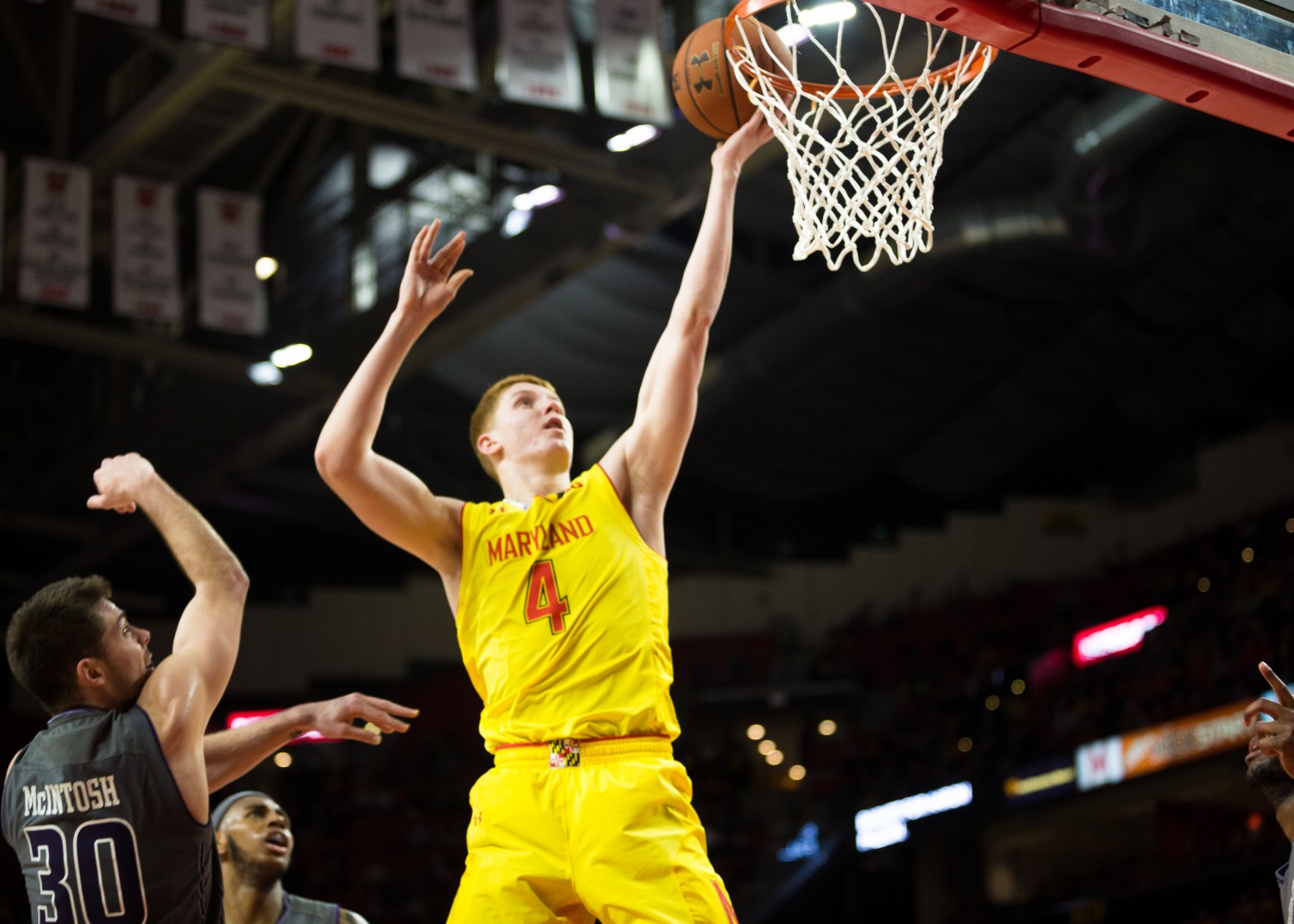 After Maryland men’s basketball guard Anthony Cowan stole the ball from Northwestern guard Scottie Lindsey with about 38 seconds remaining Monday night, Cowan dribbled around the other side of the court, dodging defenders and running out the shot clock.

With about seven seconds left on the shot clock, Cowan attempted a long 3-pointer before he and his teammates played lackadaisical defense on the other end as the game clock expired.

It was a rare sequence for the Terps in another team’s stadium.

Maryland’s 71-64 win at Northwestern was just its second road win this season and first since Dec. 3, when the Terps beat Illinois in overtime. The victory doesn’t save Maryland’s slim NCAA tournament hopes, but the Terps proved, after so many road losses that came down to the wire, they’re capable of winning away from Xfinity Center in their final road game.

For the beginning of the second half, it looked like the Terps’ road troubles would continue. The Wildcats built an 11-point lead and finished shooting 40 percent from beyond the arc. But when Northwestern (15-14, 7-9 Big Ten) began to miss, the Terps (19-11, 8-9) pushed the ball in transition and dominated the low block, scoring 20 points off turnovers and 34 points in the paint.

Guard Kevin Huerter scored a game-high 18 points, while many of guard Dion Wiley’s 13 points came at crucial times. The redshirt junior scored consecutive baskets to give Maryland its first second-half lead with just under nine minutes remaining. Then, the Oxon Hill native sunk a corner 3-pointer with 3:54 left that provided the Terps a nine-point edge and capped their 16-2 run.

“Their guys, the way they stretch you, they have a lot of good shooting on the floor,” Northwestern coach Chris Collins said. “We got a little bit too spread out. In the second half, it gave Cowan, especially, driving lanes for his ability to get into the paint, not always score, but he picked up a lot of fouls doing that.”

Lindsey, who led the Wildcats with 20 points in Maryland’s 73-57 win over Northwestern on Feb. 10, paced Northwestern again with 15 points. But the Wildcats were without guard Bryant McIntosh (shoulder), limiting their ability to penetrate.

Maryland may face Northwestern again with McIntosh healthy, as the teams would play each other in their first Big Ten tournament games if the season ended today. That bodes well for Turgeon’s squad, given the Terps are 2-0 against the Wildcats this season and, Monday, displayed the poise in their arena Maryland faithful had been looking for all year.

“After the last game, I said, ‘The only chance you have to maybe get to 9-9 is to win at Northwestern,'” Turgeon recalled telling his players. “We’re playing a really good Michigan team Saturday, but I think 9-9 gives you a chance still to think positive thoughts.”