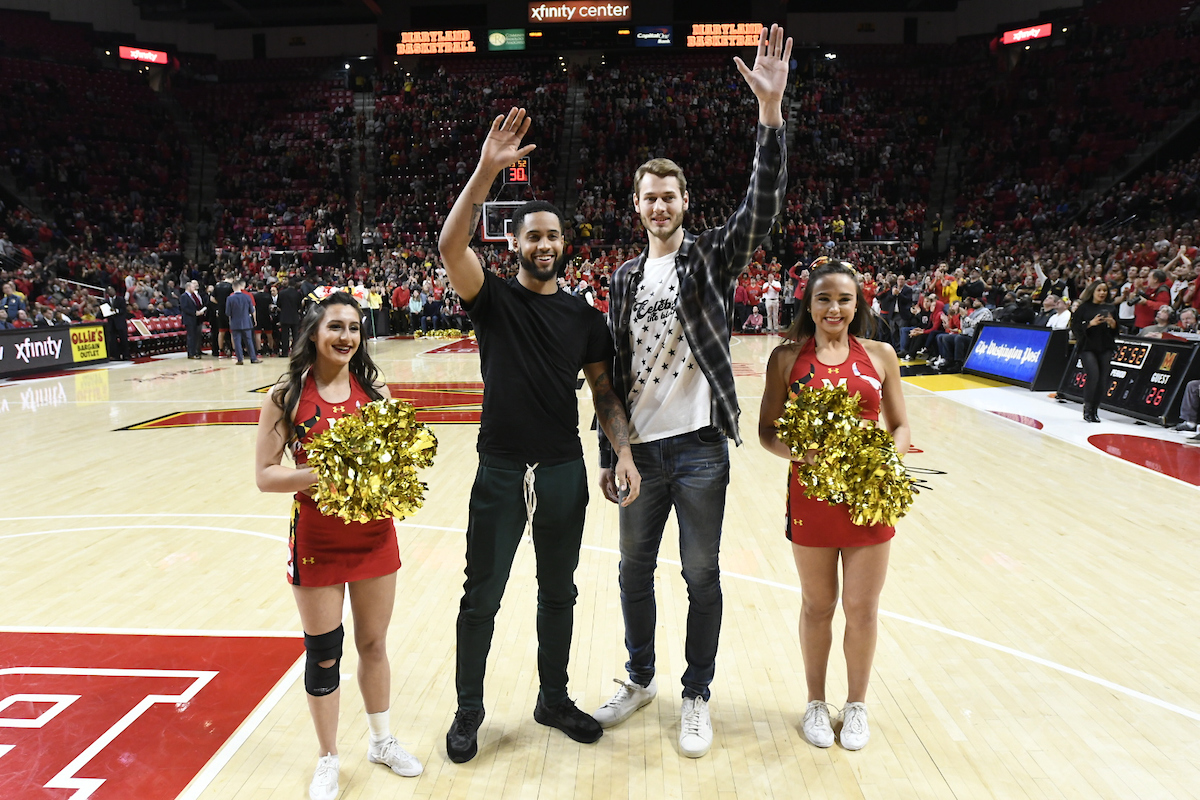 During a timeout in the Maryland men’s basketball team’s 61-51 win over Rutgers on Saturday night, the Terps stopped their huddle to turn their attention toward Melo Trimble and Jake Layman.

The former Maryland stars, who were visiting a Terps game for the first time since departing the program, were being honored on the court. Mark Turgeon had never before halted a huddle during timeout activities, but the seventh-year coach made sure he and his team had the chance to clap for them.

Trimble and Layman received a warm welcome during their visit Saturday, allowing players and fans to reflect on the memories and success they brought to Maryland.

“I was really happy for Jake and Melo,” Turgeon said. “It was great to have them back.”

Five Maryland players transferred after the Terps finished the 2013-14 season with a 17-15 record, but Trimble led Turgeon’s squad to its first NCAA tournament since 2010 the following year.

The Upper Marlboro native, who now plays with the G League’s Iowa Wolves, led Maryland in scoring and to three NCAA tournament appearances during his three seasons in College Park before forgoing his senior year to enter the NBA Draft last year.

Layman stuck with Maryland for four years while many of his teammates left the program, becoming a standout player his final two seasons. The current Portland Trail Blazers backup tied former Maryland legend Juan Dixon for the most games played with the Terps (141) before graduating in 2016.

So Trimble and Layman donned large grins when they entered the media room prior to Maryland’s game Saturday before fielding questions about their professional careers and the current team.

“I’ve wanted to get back here to catch a game for a long time now,” Layman said.

“It feels great to be back,” Trimble added. “I’m used to sitting courtside with the team and putting that uniform on. It’s very different.”

The two former Terps were named honorary captains during the under-16 timeout of the second half. The 15,587 fans at Xfinity Center — and the current team — gave them a standing ovation while a highlight video of their careers played on the jumbotron. A pair of students waved Layman jerseys from Maryland and Portland.

The snow and Maryland’s middle-of-the-pack Big Ten record made for a smaller crowd than most conference games, and Turgeon wished it had been a sellout, but the Terps faithful made themselves heard.

While Layman is familiar with loud home crowds in the NBA, Saturday was a rare opportunity for Trimble to again be part of an energized arena. When he last played at Xfinity Center on March 4, 2017, Trimble sent fans into a frenzy with his game-winning 3-pointer against Michigan State.

Trimble stays in touch with his former teammates, such as guard Jared Nickens, whom Trimble often motivates to work hard for his senior year. He also speaks with guard Anthony Cowan, who has taken over Trimble’s role as the team’s top-scoring point guard. Trimble has encouraged his protégé to keep playing aggressively even as he’s missed numerous last-minute shots this year.

While guard Darryl Morsell never played with Trimble, the freshman envies his predecessor for changing the program. Freshman forward Bruno Fernando said he prayed Trimble would come back for his senior year so they could play together.

“He’d been through a lot here having to be that lead guard while everybody’s watching,” Cowan said. “It’s good to always have somebody to talk to who’s already experienced it. He did so much for Maryland basketball.”

But Trimble relived his Terps friendships and cheers Saturday, reminding Maryland of the success it enjoyed during his tenure.

The Terps high-fived Trimble as they jogged off the court after their win. Cowan told Trimble he’s ugly, continuing the jokes they played on each other last season.

Trimble even attended Turgeon’s postgame press conference, asking his former coach if he misses him.

“I miss you, Melo,” Turgeon told Trimble. “I miss you a lot. You miss Maryland, right?”

“I miss Maryland,” Trimble responded, “and I miss you.”