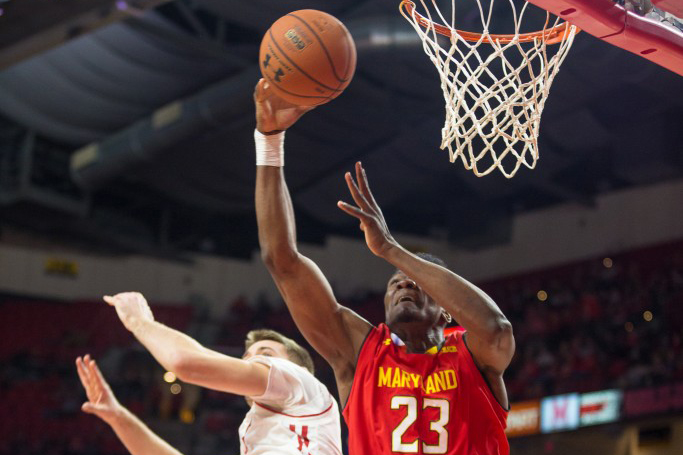 Forward Bruno Fernando received a pass on the low block while matched up against forward Isaiah Roby with just over four minutes remaining in the Maryland men’s basketball team’s 70-66 loss at Nebraska on Tuesday.

Fernando had been facing double teams all game, and forward Isaac Copeland sagged off guard Darryl Morsell on this play, serving as an extra defender if Fernando rotated toward the middle of the court, like he usually does.

Instead, Fernando spun past Roby toward the baseline, avoiding a double team and slamming a one-handed dunk.

Fernando has struggled against double teams at times throughout Big Ten play, which has been a factor in his offensive struggles in some games. But he displayed development against those defensive schemes versus the Cornhuskers, scoring a team-high 21 points on 9-for-14 shooting with nine rebounds and five assists.

“He grew up a lot,” coach Mark Turgeon said.

Turgeon said Fernando got off to a slow start, as the freshman didn’t begin controlling the paint until midway through the first half. That’s when the Terps began feeding Fernando the ball down low more often, and he caught defenders off-guard with his scoring and passing abilities.

Fernando scored 12 points in the first half, and when he wasn’t scoring, he was facilitating Maryland’s offense. Instead of forcing shots when he faced double teams, the 6-foot-10, 245-pound forward passed to open teammates.

Turgeon felt Morsell didn’t look comfortable in the paint like he did in Maryland’s win over Northwestern on Saturday, but Fernando still helped Morsell score 11 points. Twice, Morsell’s defender helped double team Fernando, and Fernando found his fellow rookie for an open layup.

Fernando often played on the perimeter at IMG Academy, said his high school coach, John Mahoney, and he showcased those facilitation skills Tuesday.

“He was reading the situations better,” Turgeon said.

Fernando’s production also came from his three offensive rebounds, all of which he converted to putback scores. At the end of the first half, Fernando tipped in guard Anthony Cowan’s missed shot to give the Terps a two-point advantage at intermission.

Fernando’s rebounding savvy also helped him get on the board in the second half when Maryland struggled to provide him open looks against double teams. Nebraska coach Tim Miles said Roby, who was guarding Fernando, made adjustments at halftime.

The Terps wanted to feed Fernando while trailing by one with just under a minute remaining, but Roby held his arm in front of the Angolan to deny the pass.

“It’s always tough guarding guys, especially when they’re really aggressive like that,” Roby said. “The first few plays they threw it into him, I knew it was going to be a tough game.”

Fernando’s production is crucial while center Michal Cekovsky is easing back from his left heel injury and Turgeon has limited forward Joshua Tomaic and center Sean Obi’s minutes. On top of that, Morsell and guard Kevin Huerter battled foul trouble Tuesday.

While Maryland’s NCAA tournament hopes are slim, Fernando displayed the potential that could make him one of the team’s top players next year if he returns instead of entering the NBA Draft.

“It was good to see that he got more confident as the game went on,” Turgeon said.